Event to honor the memory of IBEW 1245 member Tim Gillaspie, who was shot and killed at a dinner party in Santa Rosa while trying to protect his friends and family from the gunman.  Proceeds will go to AMVETS and the Gillaspie family.

California regulators have proposed guidelines for how investor-owned electric utilities (IOUs) should notify customers in the event power lines must be de-energized, including development of a statewide education campaign about the Public Safety Power Shut-offs (PSPS) which are designed to reduce the risk of equipment sparking a wildfire.

With so much going on in nearly every corner of IBEW 1245’s jurisdiction, Business Manager Tom Dalzell presented the Advisory Council with a broad overview of some of the successes and challenges that Local 1245 and its members are facing this season. Dalzell began by touching on the work that the union is continuing to… [Read More]

After 35 years as an active member of IBEW 1245, including five years as its President, Art Freitas announced that he will be retiring from his leadership position with the union during the quarterly Advisory Council meeting in Vacaville. “Art has been on the IBEW 1245 Executive Board for 15 years, and he retired from… [Read More] 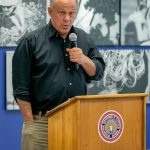 Eight-year IBEW 1245 member Javier Esquivel has won the union’s quarterly photo contest. Brother Esquivel is an outside line journeyman lineman currently working for Cupertino Electric. His winning image, captured during a pole change-out job on Treasure Island, depicts an apprentice lineman on a pole with the San Francisco skyline and Bay Bridge as the… [Read More]

When dangerously high winds arise this year, the utility says it will black out fire-prone areas that are home to 5.4 million people.

Community Choice Aggregators (CCA) are expected to procure the majority of new resources in California in the next decade, and their renewables-heavy portfolios must be balanced against broader system needs, said regulators. 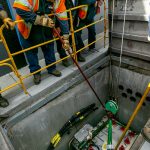 In downtown San Francisco, there’s always a lot to see. But there’s one thing you won’t see much of in downtown SF anymore – overhead power lines. That’s because during the 90s and 2000s, many of the city’s power lines were buried underground as part of a broad aesthetic improvement initiative. Currently, around 50% of… [Read More]

General Safety There was some discussion on the topic of water jugs and the problems associated with them. Here is a snippet from the CalOSHA regulation on drinking water in the work place. This can be found in Subchapter 7. General Industry Safety Orders (Group 2. Safe Practices and Personal Protection, Article 9. Sanitation) (c)… [Read More]