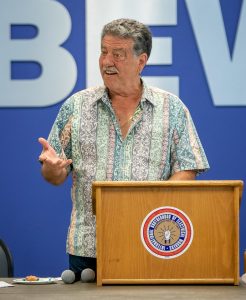 After 35 years as an active member of IBEW 1245, including five years as its President, Art Freitas announced that he will be retiring from his leadership position with the union during the quarterly Advisory Council meeting in Vacaville.

“Art has been on the IBEW 1245 Executive Board for 15 years, and he retired from the company 14 years ago — so instead of doing what we all hope to do when we retire, he chose to commit himself and his time to keep the union going strong,” Local 1245 Business Manager Tom Dalzell told the Advisory Council. “Art has led us through some really difficult times, and our 20,000 members today and for years to come will have better, safer lives and better working conditions because of Art’s dedication.”

Dalzell proceeded to present Freitas with an engraved plaque to commemorate his service to the union. In his final address as President, Freitas took the time to express his gratitude to his union family. 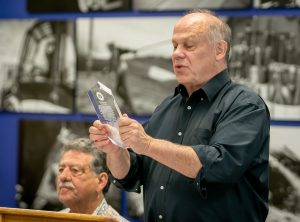 Dalzell read the inscription on the plaque before presenting it to Freitas.

“I want to thank the Executive Board … I think we’ve done a lot of good work together, and we’ve pulled our weight together,” said Freitas. “I also want to thank the Advisory Council members, because I know what it takes to do what you do. I’ve been a shop steward since I first started paying dues, but my first experience really getting into the union was when I filled in for our Advisory Council member when he was unable to make the council meeting … I got there and I was scared to death, sitting out there where you guys are.”

“My last shout-out goes to all of the business reps out there,” Freitas continued. “Without you, our union wouldn’t be doing what it’s doing. I appreciate every one of you, all of the hard work that you do, and all of the hours you put in.”

With Freitas’ resignation coming just one month before the union membership begins voting on new leadership, the Executive Board has opted to leave the position of President vacant until a new President is elected. In the interim, Vice President Anna Bayless Martinez will fill the role, in accordance with the IBEW Constitution and Bylaws. 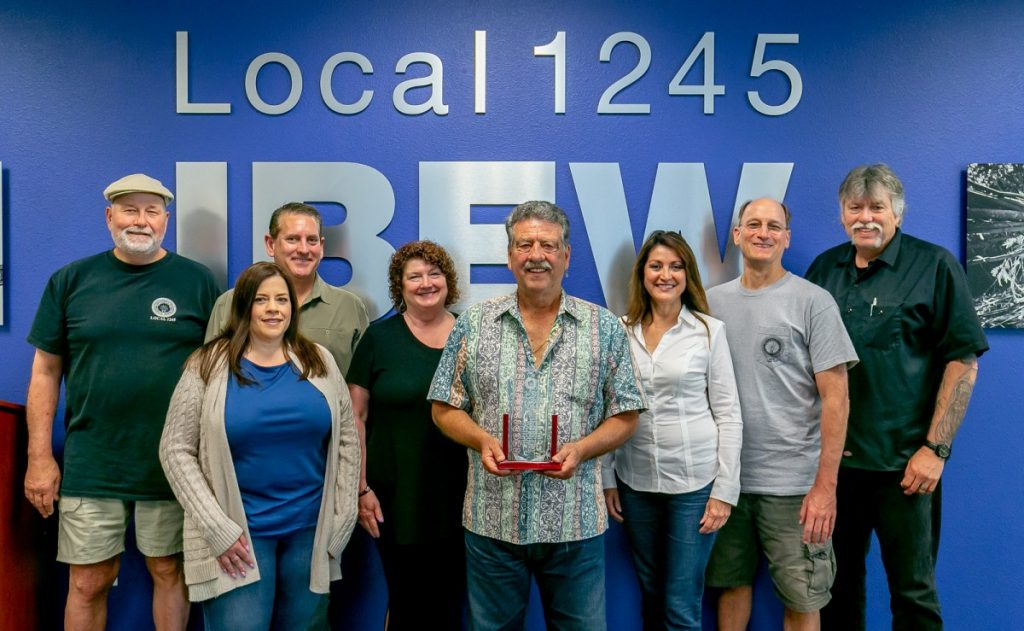 Freitas, with plaque in hand, poses for one last photo with the Executive Board.