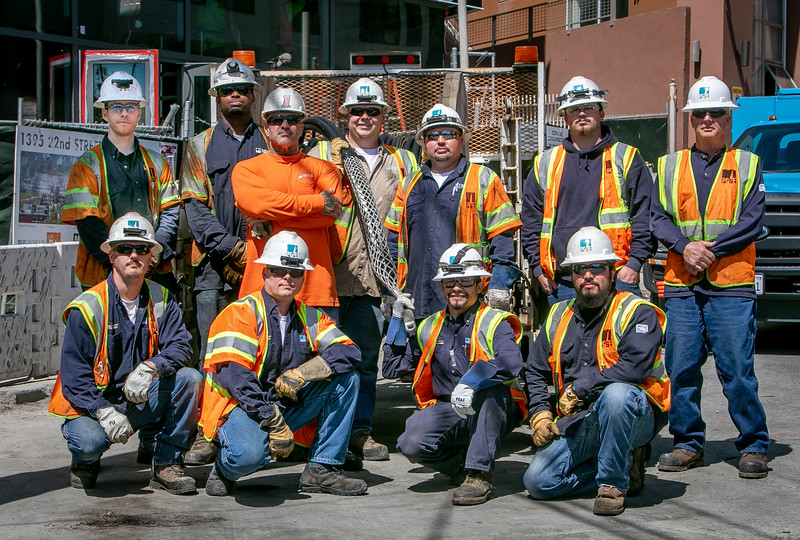 In downtown San Francisco, there’s always a lot to see. But there’s one thing you won’t see much of in downtown SF anymore – overhead power lines. That’s because during the 90s and 2000s, many of the city’s power lines were buried underground as part of a broad aesthetic improvement initiative.

Currently, around 50% of San Francisco’s power lines – including pretty much all the lines that run through the Financial District and the rest of the downtown area — are now underground. The city had originally intended to underground every one of its wires, but due to the exceedingly costly nature of undergrounding, the allocated funds ran out well before the project could be completed. As a result, approximately 470 miles of power lines still remain overhead. 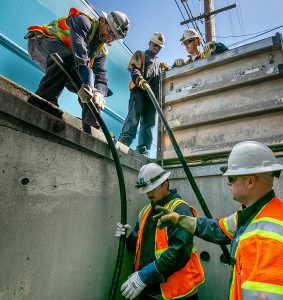 Working on underground power lines is markedly different from overhead line work, which is why PG&E has two separate electric workgroups in SF – one group handles the overhead lines, while the other group is responsible for the underground work.  These two groups don’t usually work together, but on occasion, when there’s a job in a neighborhood with lines above and below ground, both the overhead and underground crews will get called in.

That’s precisely what was going on when the Utility Reporter arrived at a job in the Potrero Hill area of San Francisco.  The task at hand involved installing three transformers, two switches and a J box in order to run service to a new apartment building. Underground Foreman and IBEW 1245 member Leo Terrazas detailed the specs of the job.

“Right now, we have cable from riser to riser — it has a dip in the underground, and basically we are installing three transformers for this new building here,” Terrazas explained. “So it goes from the riser down to a seven box, then up to the other riser — and we are going to divert the cable from that seven box to another seven box, which is going to go to a J box. And from there, it’s going to go to three transformers and another switch that we’re going to install back to that riser.” 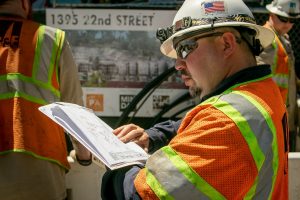 Terrazas and his underground crew worked to run the secondary cable bright and early in the morning, and the overhead crew came out later that day to wreck out the existing primary riser and help the splicers pull in new primary cable. The following week, the underground crew went back to finish up the work.

You’d be hard pressed to find an electric crew that hasn’t encountered its fair share of challenging work sites, but there’s nothing quite like working a bustling city street, complete with multiple utility crews, heavy traffic, road work, buildings under construction and an adjacent MUNI light rail station.

“It’s really, really congested. And it’s a challenge just working around each other,” said Terrazas. “But other than that, everything’s pretty straightforward. We do this all the time.”

As a 14-year member of IBEW 1245, Terrazas appreciates the fact that he and his crew have exceptionally strong union representation, something that becomes even more apparent when he meets workers who’ve been employed at other, non-1245-represented utilities.

“We see guys coming here from different companies, and they say they came here because of the benefits we have,” he said, acknowledging that those benefits are a result of 70 years of union bargaining and tough negotiations. “They’ve worked for other utilities that were taking away a lot of the benefits, and that’s the reason why they moved to California to work here at PG&E — because of [IBEW 1245] and what they’ve done for us.”