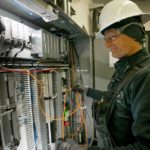 Known as one of the country’s most popular and remarkable winter-travel destinations, the greater Tahoe-Truckee area attracts thousands of tourists from all over the world during this time of year. For Truckee’s visitors and residents alike, reliable access to electricity and water are often taken for granted – but in a town that averages more… [Read More]

The IBEW 1245 members at AC Transit have voted to approve a tentative agreement on a three-year MOU that includes 9% general wage increases plus equity adjustments up to 2% and a $500 signing bonus.  The Board of Directors recently approved the agreement on January 8, 2020. As part of the agreement, medical coverage will… [Read More] 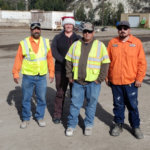 It was late in the afternoon on a Friday in December, and as he was wrapping up work for the day, City of Lompoc Landfill Coordinator and IBEW 1245 member Vincent Reyes noticed a patron’s truck, which was parked right near the scales in the drop-off area, had been idle for quite some time. He… [Read More] 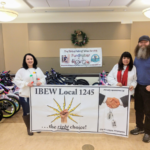 In what has become an annual tradition, IBEW 1245’s Lompoc unit co-sponsored the 13th annual Brice Fabing Memorial Bikes 4 Kids drive in 2019. IBEW 1245 member Dorine Fabing and her husband started the drive in memory of their son, Brice, who died in 2005 at the age of 17. The Lompoc unit donated $500… [Read More]

We believe that strong unions are the best force for a fair economy and a just society. That’s why you and I and thousands of other union members and staff work so hard every day to strengthen our union. And it’s exactly why our opponents are willing to spend millions to weaken unions. We were… [Read More]

IBEW 1245 members at Lindmore Irrigation District have ratified a new MOU, which was subsequently approved by the Lindmore ID Board. The new three-year agreement includes wage increases of 3.5% for January of 2020, 4% for January 2021 and 4% for 2022, with a compaction adjustment for the O&MW2 of .093%  with upward effects with… [Read More] 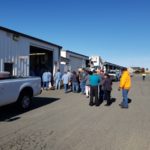 IBEW 1245 members at the city of Lompoc hosted a BBQ fundraiser for an IBEW 1245 member who is fighting cancer and has been off work for several months. “Maria Salasar organized the event with the help of our members and city staff,” Local 1245 Business Rep Jaime Tinoco reported. “Tony Vickery, Isaac Rodriguez and… [Read More]

The members at the City of Alameda (AMP) have voted to approve a tentative agreement on a four-year MOU that includes 9% general wage increases plus equity adjustments up to 13%.  The City Council recently approved the agreement on November 19, 2019. As part of the agreement, overtime is redefined to include work outside of… [Read More]

After voting down an initial tentative agreement as well as the City’s Last, Best and Final offer, IBEW 1245 members in the City of Redding’s maintenance unit have ratified a new three-year agreement, which was subsequently approved by the Redding City Council in open session in early December. The agreement, which was reached through mediation,… [Read More]