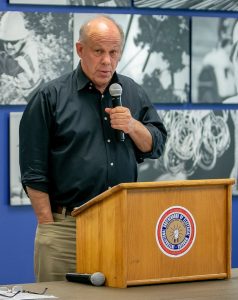 With so much going on in nearly every corner of IBEW 1245’s jurisdiction, Business Manager Tom Dalzell presented the Advisory Council with a broad overview of some of the successes and challenges that Local 1245 and its members are facing this season.

Dalzell began by touching on the work that the union is continuing to do in Nevada following our successful campaign to defeat energy deregulation in that state last year. The wealthy casino owners and big tech companies behind Question 3 continue to keep the union on its toes, but thanks to the resources the union has been able to allocate to Nevada, our members and the customers they serve there are faring just fine.

Dalzell then pivoted to the great success that Local 1245 has had with membership retention at our public sector properties. After last year’s Janus v. AFSCME Supreme Court decision — which sought to weaken the House of Labor by eliminating fair share fees in the public sector — many unions saw a precipitous decline in membership, in some cases 30% or more. But IBEW 1245 has only lost about 1% of its public sector members since the ruling.

“This is all because of the hard work that our Volunteer Organizing Committees and staff have put in to keep members in the union,” Dalzell pointed out.

He mentioned that the unity and power we’ve amassed within the public sector is going to be on full display at the City of Redding, where we’re encountered extremely difficult bargaining in the past, and this current round of negotiations is shaping up to possibly be the toughest yet.

Dalzell also mentioned a new challenge on the horizon at 1245’s largest public sector employer, Sacramento Municipal Utility District (SMUD), where the Board recently approved a 9.25% rate increase over the next two years.

“SMUD customers are not used to rate increases like this, and who do you think will bear the brunt of their frustration? It’s probably going to end up being our members.” Dalzell said.

Dalzell then pivoted to the myriad of challenges at PG&E, many of which are stemming from the company’s Chapter 11 bankruptcy filing. He noted the key role that IBEW 1245 has on the Unsecured Creditors Committee, and mentioned the bankruptcy court’s recent approval of 130% in STIP payments for 2019. STIP is an at-risk pay program that effects approximately 50 members of Local 1245, and many more members of IFPTE-ESC Local 20. STIP payments were cancelled in 2018, and while the extra 30% in 2019 doesn’t make up for that lost pay, it is a step in the right direction.

Dalzell then shifted to a discussion on the city of San Francisco’s latest effort to municipalize the utility, noting that voters have shot down such attempts multiple times in the past, so this time the city’s leadership may endeavor to do it without voter approval.

“They understand that they can’t [municipalize] during bankruptcy, but they are talking about it — and we oppose it. Because even if they’re the best employers in the world with good intentions, there’s still a very real issue with our members’ pensions and post-retirement medical,” said Dalzell. “Now, we don’t support private utilities over public utilities, because we represent both — what we oppose is a change that would negatively impact our members and the customers they serve … and we will be fighting San Francisco with everything that we have against municipalizing there.”

Dalzell also noted that some tech companies see opportunity with PG&E in bankruptcy.

“Solar City, for example, says that they can do a better job running the grid than the PG&E. They think they can take all the data that’s been generated from smart meters — which is an awful lot — and figure out how to man the control centers better than PG&E,” said Dalzell. “And the distributed energy resources outfits are now saying instead of upgrading the Gonzalez Sub in North Bay, why don’t we do some lithium battery storage? So all of those challenges continue.”

Dalzell emphasized that he and other members of the union staff are in close contact with Gov. Newsom and other lawmakers, but the confidence in the company remains very low around the Capitol, despite the recent changes to the board and company leadership.

And with fire season just around the corner and the company still under heavy scrutiny from the judge on the San Bruno case, Dalzell underscored the work that the company and our members are doing to harden the grid and reduce fuel in an effort to mitigate fire risk on tens of thousands of miles of power lines. Due to the sheer volume of work, Local 1245 has three times the usual number of outside line contractors and line clearance tree trimmers working on PG&E property, and the company is seeking to hire an additional 500 linemen in the near future to address this massive workload.

And that’s not the only place where work is expanding. Dalzell sees opportunities for growth in two other areas as well. Electric vehicle charging station installs are continuing to move forward, which means more work for our members. Additionally, the union is striving to bring some of PG&E’s drone work, which up until now has been mostly contracted out, back in house and into the hands of our members who took a union-sponsored FAA drone training last year for precisely this reason.

Dalzell concluded by underscoring that we’re facing numerous obstacles and perhaps even more opportunities, but in his words, “We’re going to get through this.”