Members of IBEW Local 1245 ratified a new agreement with Plumas-Sierra Rural Electric Cooperative in a second round of balloting conducted on Aug. 5. The two-year agreement, which runs through June 30, 2011, increases wages 3.5% on July 1, 2009, and by another .75% on Jan. 1, 2010 based on PSREC meeting certain financial goals…. [Read More]

The Gridley City Council in June approved a one-year contract extension with IBEW Local 1245. The extension had already been ratified unanimously by Local 1245 members. The union committee had completed preparation for negotiations, but the city’s financial condition created a poor environment for bargaining. The parties negotiated the one-year extension after meeting four times…. [Read More]

The Western Area Power Administration (WAPA), an IBEW Local 1245 signatory employer, has entered into a Memorandum of Understanding with Great Basin Transmission to explore a potential partnership to develop the Southwest Intertie Project (“SWIP”) under WAPA’s authority in Section 402 of the American Reinvestment and Recovery Act of 2009. The SWIP is a 500-mile,… [Read More] 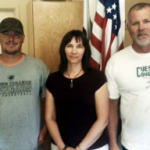 Editor’s note: The Local 1245 Bargaining Committee at Plumas-Sierra Rural Electric Cooperative sent the following letter to members on July 23, along with a copy of management’s “last, best and final” offer. You can go back to the Local 1245 home page for a link to the offer. July 23, 2009 To all Local 1245… [Read More]

Public sector workers have scrambled in recent months to defend their wages and benefits  as economic problems mount for many California municipalities. Local 1245 members at the City of Oakland on June 26 concluded negotiations in which the City was seeking 10% budget savings from its “miscellaneous” unions. The City was facing an $85 million budget shortfall. The… [Read More]

Unit 1411, City of Santa Clara, has rescheduled meeting dates to avoid conflicting with other unit meetings served by Business Rep. Bill Brill. Brill has recently taken over responsibility for the Santa Clara unit from Sheila Lawton, who has been re-assigned elsewhere. Meetings for the rest of 2009 for the Santa Clara Unit are as… [Read More]

Unit 3212, Redding, will now meet at 4:00 pm instead of 5:15 pm. Dates and location remain the same. Kit Stice, Business Representative