The following article by AFL-CIO President Richard Trumka was published June 22, 2010 on the Huffington Post. “Wop.” “Hunkie.” “Polack.” “Kike.” When I was a kid growing up in Nemacolin, Pa., those are some of the slurs people used for us. Why? Because our parents or grandparents came to this country from somewhere else, fleeing… [Read More]

ALERT DECLARED AT DIABLO CANYON–FIRST EVER  This story by David Sneed appeared June 24, 2010 in The Tribune, San Luis Obispo, Calif. For the first time in its history, Diablo Canyon nuclear power plant Wednesday declared an alert when unhealthy levels of carbon dioxide flooded into a lubrication oil storage room at the plant. Workers had finished… [Read More]

Senate Republicans on June 24 once again blocked legislation to reinstate long-term unemployment benefits for people who have exhausted their aid, prolonging a stalemate that has left more than a million people without federal help. Republican Senate leader Mitch McConnell said the bill would have added to the national debt if it had passed. The… [Read More]

CEO MEG WHITMAN’S JOBS PLAN: ELIMINATE, OUTSOURCE, DOWNSIZE If she is elected governor in November, Meg Whitman wants to “run California like a business.” So what does that mean for California’s working families? Whitman has a history of layoffs, outsourcing and exorbitant executive perks as CEO and Board Member of eBay. While on the campaign… [Read More]

On-going budget problems continued to complicate labor-management relations between Sacramento Regional Transit and IBEW Local 1245 going into the summer. The District and IBEW agreed to mediation in an attempt to reach a collective bargaining agreement and held their first meeting with a mediator on May 5, but no follow-up meeting has yet been scheduled…. [Read More]

STATE AIR BOARD OKs 33% RENEWABLE ENERGY RULE The following story by Wyatt Buchanan appeared Sept. 24, 2010 in the San Francisco Chronicle. The California Air Resources Board approved one of the strictest renewable energy regulations in the nation Thursday (September 23), requiring utilities to get a third of their energy from renewable resources by… [Read More] 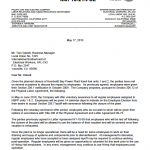