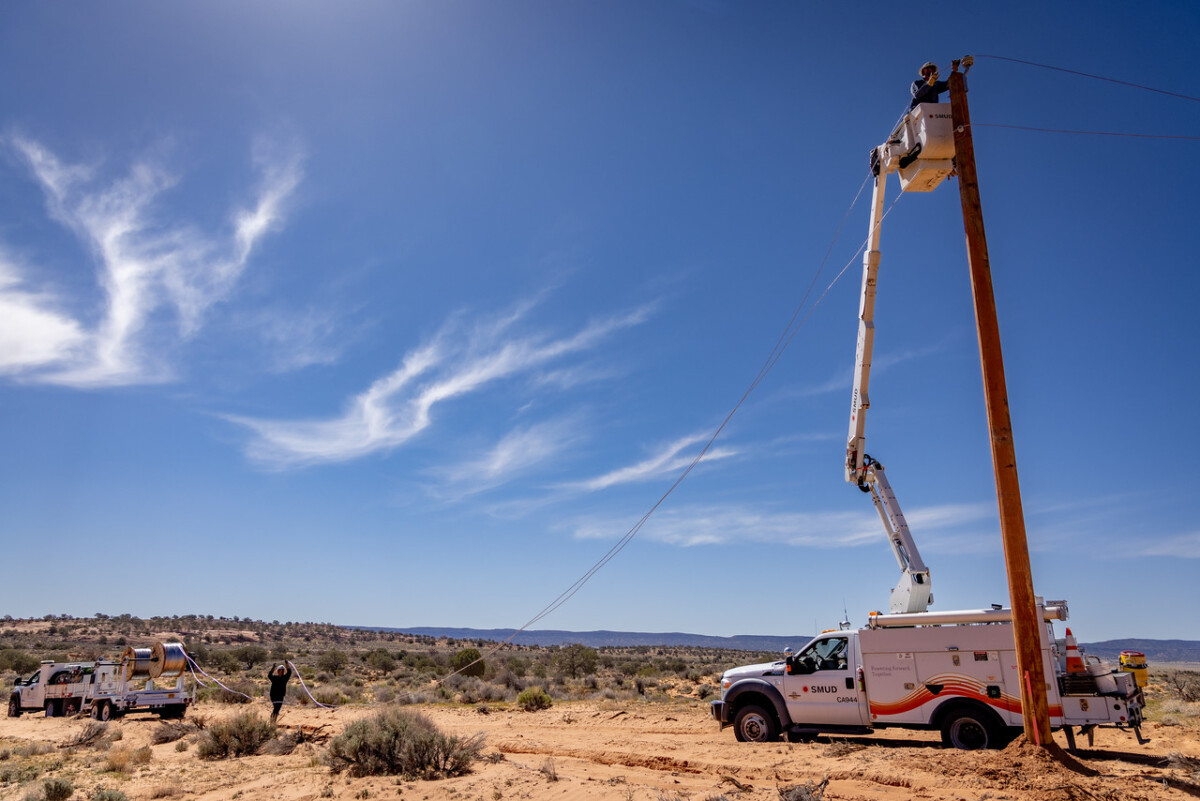 IBEW 1245 members from SMUD volunteer to Light Up Navajo.

Imagine life without electricity in your home. No running water. No reliable lighting, heat or air conditioning. No microwaves, washing machines or other appliances.

Imagine having to store all your perishable food in a portable cooler full of ice. Imagine driving over an hour each week to fill a massive water drum so you can drink, cook and clean.

This type of life is nearly impossible for many of us to truly envision in the 21st century – but for thousands of families that live on Navajo Nation, this is their everyday existence.

According to PublicPower.org, nearly one in three families on Navajo reservation – around 15,000 households – do not have access to electricity in their homes. They account for 75% of all unelectrified homes in the United States.

Due to the isolated, rural location of these homes, it’s been a costly, and subsequently, extremely slow endeavor to bring power to these families. In an ambitious attempt to solve this unacceptable problem, the American Public Power Association and the Navajo Tribal Utility Authority partnered in 2019 to launch a pilot program they called “Light Up Navajo.”

The program aimed to power up more Navajo homes faster, at a significantly reduced cost. In the spring of 2019, a crew of IBEW 1245 members from SMUD volunteered to travel to Navajo Nation and participate in the pilot, along with crews from more than a dozen other public utilities. Read about their experience here.

APPA reports that the volunteer crews connected more than 230 homes to electricity over the course of the six-week pilot, reducing the total number of U.S. homes without electricity by one percent.

Given the success of the pilot program, a second Light Up Navajo was planned for 2020, but was cancelled due to the pandemic. In 2022, Light Up Navajo resumed, and another crew from SMUD went out to Navajo Nation to turn the lights on for families who have waited far, far too long.

Navajo Nation is an enormous, rugged swath of land covering parts of Arizona, New Mexico and Utah. At 27,000 square miles, it’s geographically larger than 10 US states, but it’s not exactly easy to access.

“We drove from Sacramento in two days,” IBEW 1245 member and SMUD Line Foreman Garrett Gross told the Utility Reporter. “The first day we stayed in Needles. Very slow and steady. The second day from Needles, there was a fire just to the north of Flagstaff, so we got rerouted and had to drive through the Grand Canyon to Kayenta [Arizona].” 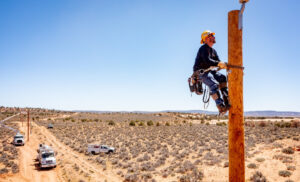 When Gross’ crew, which consisted of Linemen Matt Ramey, Brad Powell and Justin Estes, and Apprentice Austin Boyd, finally arrived at the reservation, they were blown away by what they saw and heard.

“The shocker came on Day One… we went to a safety meeting where they told us the background of Navajo Nation, and how far behind they are in giving people power. It’s kind of amazing how many people in the United States don’t have access to electricity,” said Lineman Brad Powell. “They want it, they just can’t get it… some people here have been waiting for eight years, or even longer, trying to get power.”

“I’d seen a bunch of pictures from the previous crew that came out here. But definitely when you see it in person, it’s a whole different perspective,” Gross said. “People live so remote out here. Miles and miles out in the middle of nowhere, no power.”

The SMUD crew knew going in that the work would be challenging, but there was no way to prepare for the unique conditions they experienced on the reservation.

“The terrain is very sandy, remote, lots of wind. When it gets windy, it runs about 20 to 25 miles an hour consistently, and blowing sand in your face,” said Gross. “The terrain’s tricky. It’s not flat ground. You could easily get stuck. You definitely want to make sure you’re pointing the right direction, footing on the ground. And there’s snakes, bugs, ants.”

“We’ve been dealing with trucks getting stuck in the sand. It makes the work a little bit harder because you’re having to get a truck out to get the wire … So, a job that takes 10 minutes, ends up taking an hour, just to get there,” said Powell. 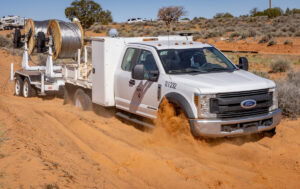 The NTUA truck gets stuck in the sand.

Despite the terrain, the crew generally enjoyed the opportunity to work in such a rare, undeveloped landscape.

“It kind of reminds me of the Reno outskirts area, but a lot more beautiful. Mountain ranges, sandy hilltops, and cool rock structures,” said Powell. “It’s beautiful land out here.” 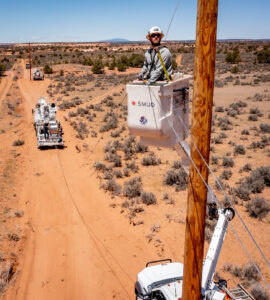 Gross explained the scope of his crew’s assignment, which involved short line extension, or SLEs, on Mondays and Tuesdays, and project work from Wednesday-Sunday.

“We are just over a week and a half with the project. We’ve energized six customers. We are currently on a project with roughly 80 poles,” Gross explained. “Got most of the poles set, and now today, which is Wednesday, we’re finally stringing wire.”

Gross described what it was like to energize a customer who had been waiting for power since 2014, calling the experience “very humbling.”

“He was able to turn his lights on, fridge, hot shower. He just got water within the last year, so now he’s so excited to take a hot shower,” said Gross. “It’s rewarding. It’s different from just going to restore somebody’s power. You’re out here with a purpose.” 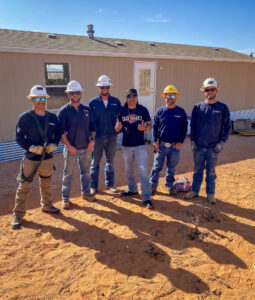 The SMUD crew with a homeowner that they just lit up for the first time ever.

“The utility we’re working with, the NTUA, all these guys, they work hard, they’re running, hustling, and they’re happy to have us help them. They’re constantly working, and we’re wanting to work too,” said Powell. “They have different techniques, and standards, and it’s fun to learn something new and different. They use a lot more old-school techniques. We hear about them, and now we’re getting to use them. So, it’s a cool experience.”

“The lineman for the Navajo Nation, and all of the employees, they’re so dedicated to their job, their hard work and craftsmanship. They’re just like us,” Gross noted. “They just want to go out and provide reliable energy and keep the lights on. We’re all out here on that mission.”

Both Gross and Powell found the experience at the reservation made them far more appreciative of the simple things they typically take for granted back home in Sacramento.

“It kind of puts things in perspective, like how easy it is for us to get water, electricity, get to the store… Here, everything here’s an hour plus away. I think there’s one grocery store within a two-hour range. [At home], I can go 10 minutes, and have multiple grocery stores to choose from it,” said Powell. “The Navajo people, they do a lot of work throughout the day, just to get themselves water, to cook. It’s a lot harder life.” 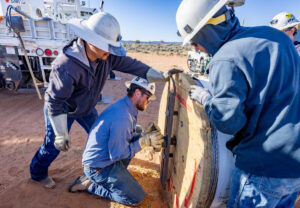 Lineman Justin Estes fits a rod into a spool of wire.

“They’re tough people, prideful people. It’s just amazing to see,” Gross added. “My takeaway is how good we’ve got it, considering there’s actually people in the United States who want power that can’t have power.”

The crew will never forget the faces of the reservation residents they powered up for the first time.

“I feel like a lot of more people should do it. It’s gratifying,” said Powell. “Seeing the people, and how excited they are, they are amazed that we would volunteer to come out here to help. To me, it’s what we’re here to do… I would come back and do it again.”