Face-to-face connection is one of the most important tools in any union organizer’s toolbox, which begs the question — how can organizers and union activists continue to build power for the union and the labor movement in the era of COVID-19, when in-person contact is likely to be limited for months to come?

The full answer to that complex and difficult question remains to be seen, but it is likely to involve the use of new online tools and tactics that simulate face-to-face engagement over the internet. While video chats and web conferences are certainly not identical to their in-real-life counterparts we’ve grown accustomed to, they still serve a very important purpose – and that purpose was on full display on Sunday, May 31, when more than 100 organizing stewards participated in IBEW Local 1245’s first-ever organizing web conference. 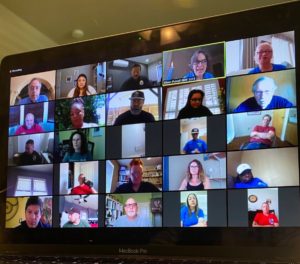 More than 100 organizing stewards, along with several Local 1245 staffers and honored guests, joined the virtual training on May 31. photo by Brittney Santana

In the wake of the murder of George Floyd that sent shockwaves across the country, and with the COVID 19 pandemic still rippling across the globe, IBEW 1245’s organizing team chose to open up the conference with a moment of silence to honor the lives lost — both to the coronavirus, as well as to racially-motivated violence. As Lead Organizer Eileen Purcell lit a candle on screen, she explained that it was a time “to fortify one another in love and justice.”

“When the meeting started with words of unity and candle-lighting, I knew I was with family,” said Lead Organizing Steward Charlotte Stevens. “I more than appreciate our local union leadership’s acknowledgment of the matters at hand, and more importantly stating their position. Thank you all for showing me I matter.”

After the emotional introduction, the organizing stewards got to hear directly from Assemblymember Christy Smith, a strong ally of 1245 in the state legislature. Despite the fact that she was in the car en route to a justice event, Smith made a point to join the video conference to express her appreciation to the Local 1245 members who volunteered to help get out the vote in her bid for Congress. 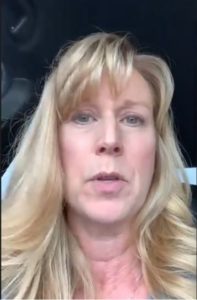 Assemblymember Christy Smith spoke to the organizing stewards on the web conference.

“I didn’t want to miss this opportunity to say thank you for the thousands of calls you made on my behalf in the Congressional race,” said Smith, who lost that Congressional special election, but plans to run again in the fall. “I’m still fighting to win this Congressional seat in November, because I fundamentally believe that labor is key to all the issues we need to solve right now. It has always been labor’s role to take up that mantle … and so we take it up now, not only for income justice, but also for the racial justice that we need to see happening across the country for our brothers and sisters. I am looking forward to doing that work.”

“Never has there been a time when we’ve had so many challenges facing us — but thanks in large part you, we’ve never been better equipped for the challenges,” Dalzell said, touching on the issues of the virus and its broad economic impacts, as well as the PG&E bankruptcy, the impending wildfire season, and the issues around race and justice that have driven people into the streets to protest in all 50 states. “We have more challenges than we’ve ever had – but we also have more assets and more power. We’re addressing each one using every tool we have, and our organizing steward program is one of the most important arrows we have in our quiver.”

“We wield a pretty heavy bat, and it’s because we have all of you and the other 22,000 members behind us, and that allows us to exercise our power for the members. It’s extraordinary, what we’ve done collectively through this madness,” added Dean, remarking on the wide array of workplace policies, labor-management agreements, safety measures and job protections that Local 1245 has successfully advocated for during COVID-19. “With wage disparity, poverty, and racism at the forefront right now, I think we are and can continue to be an example of how to treat people with respect, where we are all valued the same and everyone carries the same weight. Together, we can be a voice for equality for everyone.”

The final keynote speaker was Wisconsin AFL-CIO President Stephanie Bloomingdale, who talked about her state’s long, tough fight for justice in the nearly ten years since former Wisconsin Gov. Scott Walker’s union-stripping policy set off a massive worker uprising – an uprising that IBEW 1245 has been a part of from Day 1. 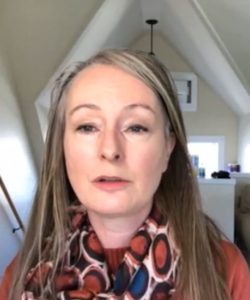 Stephanie Bloomingdale spoke to the organizing stewards via web conference.

“On behalf of the Wisconsin AFL-CIO and working people across the state, I want to say thank you to 1245 for understanding that our fight is your fight, and your fight is our fight. Together is the way we stand for working people — by building solidarity across state lines,” Bloomingdale said. “You were here with us in 2011, you were here with us in 2012 and you were here in 2016 … and in 2018, 1245 was with us when we took back our state and elected Tony Evers and sent Scott Walker packing! I’m always so proud to stand in solidarity with you, because you understand, and it’s ingrained in your organization – it’s about building worker power in our union. There is no substitute.”

The conference concluded with a very special video tribute to one of IBEW 1245’s first and most active organizing stewards, Kevin Krummes, who is now retiring from his job at PG&E. 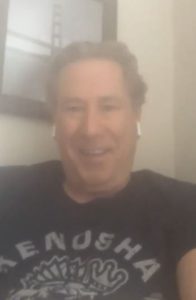 “Watching a retirement tribute and video played during the tele-conference was incredibly moving,” Krummes said. “Having legendary Business Manager Tom Dalzell and Senior Assistant Business Manager Bob Dean say good things about my work for the Union was too cool. Considering all the work and sacrifice my brothers and sisters before me made, their words quite humbling. When the Organizers — Eileen, Rene, and Fred — gave personal and heartfelt remarks, I was close to losing it. Those three are my heroes. The sense of community and family that we share at 1245 is something that I’ve never felt closer to than at that moment. And I would be remiss if I didn’t thank brother Steve Marcotte, who put the video together.”

The online organizing briefing was certainly different from the usual in-person gatherings, but the organizing stewards who attended appreciated the opportunity to come together, despite being physically apart.

“The call with our organizing family and our leaders of IBEW 1245 reminded me just how fortunate I am to have a family that continues to support me and my brothers and sisters,” said Organizing Steward Felicia Lynch. “It’s a reminder that I’m a part of a movement of people that’s common interests are to stay connected and to keep fighting for the things, people and voices that matter. It was just what I needed in all this chaos. I’m so genuinely grateful I have a place in it.”

“I’m so glad our leadership had the wisdom and forward thinking to find a way for us to connect and engage in union business, because the fight continues,” added Stevens.

“I am so proud to be a member of our union and how well we can do, even under the current circumstances. I look forward to what’s to come!” echoed Organizing Steward Rachelle Rendon.

“It was new experience for me, especially with the current situation with the pandemic going on,” Organizing Steward Joseph Loc Hoang remarked. “I personally liked the video conference; it was great getting to see my fellow brothers and sisters of the union.”

“It was comforting to hear my Union backs me in these very uncertain times!” added Organizing Steward Veronica Rivera-Avilez.

“I always like hearing Tom and Bob’s perspective on the state of the company and how 1245 continues to protect our members’ jobs and benefits,” said Organizing Steward Gary Maschio.

“The meeting was very enlightening and inspiring,” said Lead Organizing Steward Georgette Carrillo. “There is so much going on in the world, and we are not immune. It’s great to know we have a union that will fight for us.”

Local 1245 has more web-based trainings and conferences planned for this summer. On June 27, 1245 is hosting a training on AB 5 in conjunction with the California Labor Federation, and on Aug. 8, renowned labor policy expert Robert Reich will be presenting a virtual seminar just for Local 1245 members. For more info and to sign up for these upcoming virtual events, please email organizers@ibew1245.com.