During times of crisis, access to safe and reliable power is more important than ever. In the second installment of this series, meet some of the IBEW 1245 members who have been voluntarily sequestered on the job to maintain and manage grid operations during the COVID 19 crisis. Read the first installment here.

On April 27, PG&E began a voluntary sequester program with a few specific workgroups that are essential to running the grid (along with a select group of support personnel). The sequestered workers — mainly comprised of IBEW 1245-represented operators working in gas and electric transmission and distribution, as well as computer analysts and telecomm techs — are in sequester for up to 30 days, at which point they’ll be released, and a second set of workers will be brought in for the following period.

By and large, the members who have opted to participate in the sequester do so with a sense of pride and purpose, and a firm understanding of the important role they play.

“We’re the backbone to the whole infrastructure. So we’re here [in sequester] in case all of the other centers are uninhabitable and those have to be vacated, they can transfer all work to us and we can pretty much run the whole grid where we’re located,” Electrical Distribution System Operator Malcolm Blakely, who usually works out of Rocklin, told the Utility Reporter in a phone interview during his sequester period. “That’s a huge responsibility to us. So I take pride in doing this. I feel important.”

The members began their sequester assignment with a COVID 19 test to ensure no one was carrying the virus. After a somewhat lengthy waiting period, they were finally cleared for duty, and went immediately into 12-hour shift rotations. But instead of reporting to their usual worksites, they are all working at the San Ramon Valley Conference Center (SRVCC), in control rooms that are sanitized and secured around the clock to prevent any potential cross-contamination. 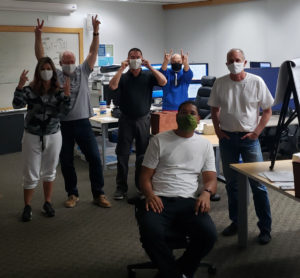 “Our primary role right now is work management, but we now are capable of doing our full job from here too — like if there’s an outage, or if we need to run a log,” explained Lead System Operator Michael Bowers, who usually works out of the Concord control center.  “We’ve had a couple people already take a shift from the actual control center to here; when somebody either called in sick or when there’s nobody to fill a shift over there.”

Working in a different location under unusual circumstances certainly presents all sorts of unique challenges. Gas Transmission Operator Arthur Docto, who usually works out of Bishop Ranch, underscored the importance of remaining flexible in a sequestered work environment.

“When you come into a situation like this, you learn to adapt to the things that are going on around you,” he said, “because none of us have ever experienced it before, so we all have to keep an open mind.”

Living at the Learning Center

Many PG&E employees have spent time at the San Ramon Valley Conference Center — aka the Learning Center — where the company frequently hosts trainings and conferences. It’s a large, multi-purpose campus, but the SRVCC wasn’t designed to manage grid operations and sequestration, so PG&E had to spend 20 days transforming the center into a facility that’s suitable for this purpose, complete with specialized, federally regulated security qualifications and clearances.

Presently, there are around 100 operators on the SRVCC campus – but you’d never know it if you took a look around.

“It’s almost like a ghost town. You’ll see maybe four or five people [outside of the control room]. The only time you see people is in the evening and morning when people are coming and going to work, and around lunchtime,” said Docto. “And we have to wear our masks when we’re outside, so when you come across people, you only see their eyes. We’re used to just smiling at people – and then you realize they can’t see your smile, so that’s a weird part.”

The SRVCC residential area is similar to a small hotel. The members each have their own private rooms and bathrooms. There’s daily housekeeping service, and a cafeteria with an ever-changing selection of food (yes, the cleaning staff and food service workers are sequestered as well).

“We’re well taken care of. I can’t complain,” said Blakely. “We get three square meals a day — four if you’re willing to stay up late enough for a midnight meal for the late-shift guys. There are snacks in the lounge areas, and TVs, and plenty of activities, pool table, darts, air hockey, X-Box.”

“There’s a basketball court, and we’ve even got a little gym here that we get to use,” said Bowers. “It’s probably the only gym that’s open in the whole area.”

After a second round of COVID-19 testing, the members are now permitted to participate in these recreational activities together, but they still keep their masks on and do their best to adhere to social distancing. There’s wi-fi throughout the residential facility, so the members can also stream music, movies and TV between shifts. But the long consecutive shifts mean that most of the members don’t have much free time to take advantage of what’s available to them on campus.

“I’ve never worked this many night shifts in a row, so I’m just trying to stay in that  ‘vampire mode,'” Transmission System Operator Brandon Gillespie told the Utility Reporter after his 18th consecutive night shift. “[When I wake up] I try to get in some exercise and take a little break, then it’s dinner, and time to go back on shift. You’ve got to be disciplined to not be tired during shifts because you were messing around during the day. Doesn’t leave a lot of time for any extracurricular stuff.”

Being away from family can be challenging, but the operators seem to be taking the whole experience in stride, and they feel grateful for the opportunities they get to connect with loved ones electronically.

“I FaceTime with the family at least twice a day to get updates on what’s going on in the house,” said Blakely. “I have four kids, ranging from age 15 down to my three-year-old boy. I miss them a lot. Of course, I miss my wife too, she gives me all the updates. And my seven-year-old is the tattletale, she gives me all the dirt.”

“When I talk to my fiancée on the phone, I’m asking her, ‘What’s it like out there? Are people still wearing masks?’ stuff like that,” said Docto, noting that he’s grateful for the fact that he’s able to receive care packages from his partner (which are wiped down before being passed off to the recipient).

Sequestration can be isolating, but the IBEW brotherhood/sisterhood culture definitely seems to help with morale – and while there may be some sibling-style bickering now and again, it’s all par for the course, according to Bowers.

“You have to understand operators are a bunch of alphas — so by nature, we tend to argue. But that’s nothing out of the norm,” he said. “Three of the guys on night shift with me are also from Concord, and  two came from the North. I know them from communicating with them on the phone in the past. So it’s kind of like meeting old friends.”

Before the sequestration started, IBEW 1245 and PG&E negotiated a letter agreement to ensure that the members in sequester would receive fair wages and benefits – and the operators have no complaints in that department.

“The union did great job as far as how they wrote the [letter agreement] … they’re definitely making sure we’re getting taken care of while were here,” said Distribution Gas System Operator Carl Olguin. “They even made sure our families are ok! I never would have thought about that. It just goes to show how much they care.”

“[The decision to enter sequester] was a no-brainer for me, in terms of the compensation part,” said Docto.

“It’s a great opportunity financially for me and my family,” echoed Blakely. “But the other reason [I took the sequester assignment] is the whole country is going through a unique situation right now with the pandemic, and I think it’s a once-in-a-lifetime opportunity, to be a part of this.”