During times of crisis, access to safe and reliable power is more important than ever. In this new mini-series, meet some of the IBEW 1245 members who have been voluntarily sequestered on the job to maintain and manage grid operations during the COVID 19 crisis.

On April 16, the Sacramento Municipal Utility District (SMUD) began a voluntary sequester program with a select handful of workgroups that are essential to running the grid. The sequestered workers, mainly comprised of IBEW 1245-represented power system operators and distribution system operators, were split into eight-person subgroups, with two power subgroups and two distribution subgroups in sequester at any given time (one was assigned to the day shift, with the other on night shift).

Each subgroup would begin their sequester with a COVID-19 test to ensure no one was carrying the virus into the control center. Once their test results came back (usually in a day or two), they would work for 10-11 consecutive days, in 12-hour shifts. They remained sequestered on company property between shifts, sleeping in individual RVs situated right outside of the control room building, with security guards on patrol to ensure the area remained free of potential cross-contamination. At the end of each subgroup’s stint, the control room is thoroughly re-sterilized in preparation for the next subgroup to come in.

Choosing to be away from home and loved ones to stay at work for 11 or 12 straight days might seem exceptionally onerous to some. But according to SMUD Distribution System Operator Julie Jasper, the decision to participate in the sequester assignment was easy, thanks to the tight-knit brotherhood/sisterhood dynamic at the distribution control center.

“Our whole workgroup volunteered to do it; I don’t think there was anybody that said, ‘No, I’m not doing that.’ So it’s kind of like a team effort; If they’re all going to do it, you might as well go ahead and do it with them. Gotta support your group, support your team,” she told the Utility Reporter in a phone interview after returning home from her first sequester period. “I love the people I work with. We all get along really great, so that’s always helpful.”

Power System Operator II Michael Ellis echoed those sentiments when he spoke to the Utility Reporter while he was sequestered, on a break between shifts.

“Pretty much all the operators volunteered, and they kept us all together as a crew. So I’m working with the same guys I’ve been working with,” he said, noting that they all tend to get along pretty well.

Being sequestered with co-workers who are also close friends proved beneficial for group morale, but they had to take extra precautions to ensure they didn’t get *too* close – at least not physically.  According to Senior Distribution System Operator Steve Hoyt, who was tasked with managing the logistics for that first subgroup, the employer’s strict distancing rules for the sequestered employees definitely added a unique layer of complexity to their situation. 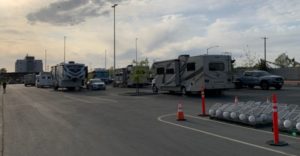 The sequestered workers stayed in RVs parked outside the control centers. Photo by Steve Hoyt

“We weren’t allowed in each other’s RVs at any time. That was your own personal space. In walking to and from the office [from the RV area in the parking lot], we had to stay social distanced. We used the elevator one person at a time, and one particular elevator was set up just for us only [since there are other workers in the building on different floors],” Hoyt explained. “The Safety Department wanted us to eat individual meals, which made ordering food a little more difficult … Usually when we’re working, we just order from a restaurant and have them bring the food buffet-style. Of course, we couldn’t do any of that.”

Some of the meals came from a specialized local caterer – and Lead DSO Jeremy Carlin, who was part of the second sequester assignment, was very impressed by the quality.

“I can’t believe how good the food is,” he told the Utility Reporter by phone, between shifts during his first week in sequester. “It’s all pre-portioned, and it’s very fresh and easy to cook. They fully prepare it all for us – so all we have to do is heat it up! It’s actually kind of impressive. We’re probably eating healthier here than we do on our own.”

The control rooms where the PSOs and DSOs work were kept completely sterile, with no one else permitted to enter besides the sequestered workers on duty. That made certain operations, like getting maps to the crews, and even the basics like tech support, more challenging, as they had to do it all electronically instead of in person.

By and large, the operators have gone through their day-to-day work during sequester without any major issues. But that doesn’t mean the experience is a walk in the park.

“Working 12-hour shifts for 11 days in a row, it kind of starts to wear on you, because you’re used to getting a break, and going back to your own life, back to your home, your family,” said Jasper. “It did get kind of challenging at the end. About seven days in, I was just ready to come home. I missed my husband like crazy … I was just getting tired mentally. I was over it.”

For Ellis, an ex-Navy man, the long hours and consecutive work days were nothing new.

“When I was in the military, I did [this type of schedule] for months on end. And when I worked at Illinois Power, and we were in a forced outage at a nuclear plant, I was working six 12-hour days a week for four or five months,” he said. “It’s not my preferred thing to do, but I can tolerate it.”

Hoyt appreciated that he could still stay connected to his family digitally, even when he couldn’t see them in person.

“I have a young son, and so we had to do his math homework by FaceTime… With electronics these days, it was easier to stay in touch than it would have been even a few years ago,” he said. “We initially went into this looking at 14 days of sequestering, and by shrinking that timeframe by a couple of days, it definitely made a difference. The 10 days of working was just about right. By the end, we were all ready to go and go see our families.”

Carlin, who was also active-duty military for 15 years, went into the assignment assuming that it would be quite different from his tours of duty, since the military puts in plenty of time and resources in preparation for such assignments, but he’s been pleasantly surprised by how well-executed the whole process has been.

“I’m actually very impressed with how much they got right, knowing how much effort goes into logistics to prepare for a group that’s never done this before,” said Carlin. “They have gone above and beyond. They got us the quietest generator I’ve ever seen [for the RVs], plus a sound barrier. They built ramps over all the cords. They even had little goodie bags of stuff we would need in our RVs. I’m definitely in the ‘no complaints’ camp.”

Ellis also managed to find a bright side during his sequester assignment.

“Don’t get me wrong now, I do miss my bed, my wife, my dog, being able to take a shower for more than two minutes,” he said. “But quite honestly, I get more sleep here because once we get off shift, other than go work out, walk around, maybe watch some TV, there’s not a lot else to do. There’s not a lot of distraction that you normally have at home.”

The fact that the members were relatively comfortable, cared for and fairly compensated during their sequester is evidence of the top-notch union representation they have through IBEW 1245.

“The union did a really good job with negotiating simple compensation in a separate letter so it was really clear-cut,” said Hoyt. “I think the compensation is more than fair, and nobody went into it with any questions as to what they were going to get, what they should or shouldn’t receive.”