In what has become an annual tradition, the newest class of IBEW 1245 organizing stewards were officially inducted during the January Advisory Council meeting in Vacaville. Local 1245 President Cecelia De La Torre administered the oath to the massive group of more than 150 stewards, and Lead Organizing Steward Alvin Dayoan was selected to address the Council on behalf of the 2020 class. 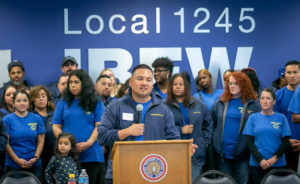 “[As an organizing steward] I’ve participated in solidarity campaigns, political campaigns, and member-to-member campaigns that have been life-changing — not only, to myself but to the labor movement … I’m very thankful to IBEW 1245 for allowing me to be a part of history,” Dayoan told the union’s leadership. “I would like to thank our business manager, Tom Dalzell, for his vision with the organizing steward program. I’m thankful for the IBEW 1245 staff, the exceptional hard work of our business reps, our advisory council, our executive board, and all of our IBEW friends and family, for your enormous support!”

“The first organizing stewards were named and trained in 2014. That is our everlasting power wherever we go,” Business Manager Tom Dalzell emphasized. “That’s how we defeated billionaires in Nevada. That’s is the power we work off of in Sacramento, in San Francisco, everywhere we go!”

Learn more about the 2020 organizing stewards.