In late October, ten IBEW 1245 Organizing Stewards participated in a three-day organizing blitz to support the United Domestic Workers (UDW-AFSCME) as the endeavor to give a voice to California’s struggling childcare providers. This is the second UDW childcare organizing blitz that Local 1245 supported in 2019 (read about the last blitz and learn more about the campaign here).

After completing a one-day training with UDW, the organizing stewards split into teams and canvassed hundreds of care providers in Contra Costa, Sacramento, and the Merced/Modesto area, successfully bringing dozens of providers into the union. Below, the stewards share their experiences on this campaign in their own words.

“I felt privileged to help people realize how important unions are. The voice of one rarely gets heard, but the voice of many is loud and strong. There was a lot of positive feedback when people realized how much more power they have when they stand together.” — Isaac Mazon, mechanic, PG&E Fresno

“It was concerning for me that many childcare providers shared similar concerns and stories regarding how subsidized childcare agencies can make it so difficult for childcare providers to simply get paid. Most childcare providers that I have spoken with were afraid of retaliation. But with the thought of rising and banding together as a union, the majority were willing to join and become members.” —  Joseph Loc Hoang, gas service rep, PG&E Modesto 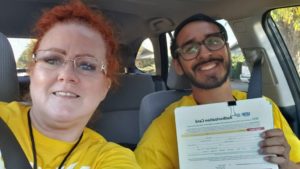 “One worker we met at the door was hesitant to open the door to strangers. She opened it a crack and we introduced ourselves. One she heard we were with the union, the threw the door open, took a visible deep breath and said, ‘Oh my God, thank you for being here, we NEED a union!’ That was a turning point for me — these workers just told me they needed the work WE were doing. They cannot leave their kids to advocate for themselves. Their calling is to care for our children. Our job is to make sure they receive a living wage and a voice in the Capitol.” — Kristen Rasmussen, customer service rep, PG&E Stockton 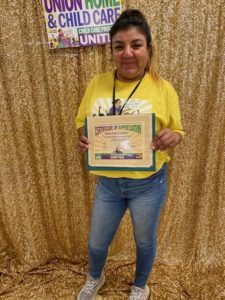 “This campaign hit me because my own childcare provider started her center with my five children. She cared for them throughout their childhood years, and now she employs one of my daughters at her building center. I’ve seen first-hand the struggles my childcare provider went through. I appreciate their work and the love for the children they care for, and I’m proud to have contributed to this campaign.” — Nilda Garcia, utility worker, PG&E Sacramento

“A lot of the providers in this area in contact with each other and already meet periodically to discuss issues they face. The providers were very receptive and were happy this is happening.” — Anthony Seemster, materials handler, PG&E Stockton 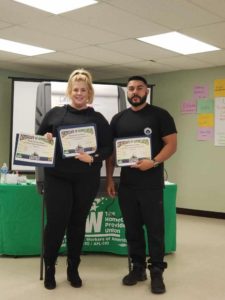 “I learned a lot about what child care providers go through and the process for subsidy care – it’s so much!  [Before this campaign] I had no clue the struggles the child care providers went through. It was eye-opening to hear some of their stories and it led to great conversations. This was my first campaign talking about forming a union and it was a good experience. Some of the child care providers I spoke to didn’t have any issues with the current system but still liked the idea of having a larger voice and uniting together.” — Tracy Amaro, routine field clerk, PG&E Lakeville

“Across all of California during the three-day blitz, a total of 925 new members joined the union and 327 signed authorization cards. It was a great show of solidarity across many different unions and different trades, working together as one team to help better the lives of very important people who do a valued role raising the children of our communities.” — Phuong Tran, gas service rep, PG&E Fremont