California’s family child care providers and early childhood educators do the jobs that allow hundreds of thousands of working parents to do theirs. But unfortunately, these hard-working, dedicated care providers are often struggling just to get by. They work long hours with few, if any, benefits and devastatingly low pay (many providers that serve low-income families through state-funded programs are being paid well below the market rate). As a result, far too many child care providers are forced to go out of business, which has created a widespread child care shortage across the state.

These providers know exactly what needs to be done to fix this broken system – and it starts with a seat at the table and the right to collectively bargain, not only for themselves, but for the families they serve and the young children in their care.

In partnership with the California Labor Federation, two unions — SEIU and UDW-AFSCME — have launched organizing efforts to empower child care providers to come together to improve the imperiled child care system and its struggling workforce. They are also backing legislation that would finally grant these child care workers the collective bargaining rights they so desperately need.

However, the vast majority of child care providers are completely unaware that union representation and collective bargaining is even a possibility for them – which means the unions have their work cut out for them. Reaching out to tens of thousands of child care providers to explain the union difference is a herculean endeavor, so the California Labor Federation called for reinforcements, and IBEW 1245 quickly answered the call, dispatching three teams of organizing stewards in Fresno, Sacramento and the East Bay to assist with a massive, week-long organizing blitz.

Many of the Local 1245 members who participated in this blitz have never been involved in a union organizing campaign of this nature before, and they found the experience incredibly rewarding and eye-opening. 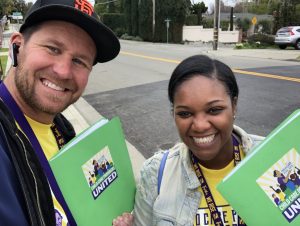 “I got to see the hard work child care providers do, interact with them, learn about their struggles, and explain how being a part of the union and joining with thousands of other child care providers is a great way to make positive change in the system,” said new Organizing Steward David Jensen. “For my first campaign, this was a great learning opportunity and I look forward to more campaign work to represent the union.”

“As a mother, I truly understand the importance of having reliable child care and for the child care providers to have reasonable pay and much needed respect. I used a home licensed child care provider when my daughter was much younger, and my provider was heaven-sent,” said Baker. “The highlight of this campaign was definitely the excitement the providers displayed when they found out exactly what we were there for, and the change that is coming!”

Lead Organizing Steward Melissa Echeverria recalled an interaction with a Fresno care provider that exemplified the importance of the organizing effort. 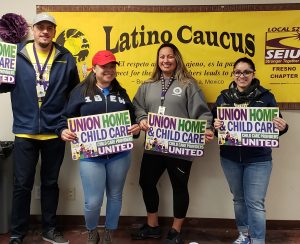 “Yvette has been in child care for more than two decades. Although she plans to retire in two years, she knows that in order to change their broken system, from their incredibly low wages which could be as low as $2.70/hr, to not receiving any healthcare benefits, they need a contract, a union,” Echeverria reported. “She said her one voice isn’t strong enough, but the voices of thousands of providers standing up, speaking out … she’s confident that she’ll be able to be in a union contract before she retires!”

For Organizing Steward Danielle Bonds, being able to sign providers up as union members was remarkably empowering.

“I love how working with Child Care Providers United pushed me out of my comfort zone and allowed me to help these dedicated providers,” said Bonds. “By speaking to them, I was able to see the compassion and motivation in their eyes. They love what they do, and it made me proud to be a part of this powerful blitz throughout California.” 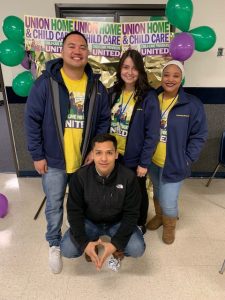 Thanks to the support from IBEW 1245 and other unions, the campaign met and exceeded its goals across the state, and is well on its way towards securing union benefits and protections for the unsung heroes who are charged with cultivating the minds of California’s future leaders.

“I was in awe of the results that were delivered by the blitz, and can see the seeds now planted for rapid growth,” said Organizing Steward Greg Simmons.

“This campaign was historic, as multiple unions from across the state came together for one common goal – educating childcare providers in California,” added Lead Organizing Steward Alvin Dayoan. “Everyone in the campaign appreciated our help, and I truly enjoyed working with our IBEW organizing team. We made our union proud during this campaign.”