As the old saying goes, “Records are made to be broken.” The IBEW 1245 members who competed at the 2019 National Gas Rodeo in mid-September certainly took that adage to heart, as they broke not just one, but two national records during the action-packed two-day competition.

The six teams that competed at the National Gas Rodeo in Springfield, MO secured their spots by earning top scores at the 2019 IBEW/PG&E Gas Rodeo back in April. Initially, only four teams from PG&E were slated to go to nationals, but IBEW 1245 opted to sponsor an additional two teams, allowing the top three teams in both the two-person and four-person competitions to advance to the national stage.

At the National Rodeo, each team must complete four qualifying events — a meter set build, a pipe cut, a hand dig and a service install. Each event is timed, and the cumulative times (plus any penalties) are tracked and displayed on the scoreboard. 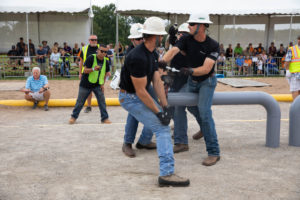 The pipe cut event proved to be our members’ strong suit. In the two-man team competition, the Manteca Gas Rats from Stockton sailed through the pipe cut in just 8.62 seconds, eclipsing the previous national record of 10.02 seconds, as well as their own best time of 9.97 seconds, which they posted at the local rodeo in the spring. And in the four-man team competition, the IBEW 1245-sponsored Team Yosemite also established a new national record in the pipe cut, completing the event in just 5.47 seconds (the previous national record was 6.11). Both teams used a specialized pipe cutter that Gas Rats team member Zachary Shepherd’s grandfather crafted specifically for the competition. 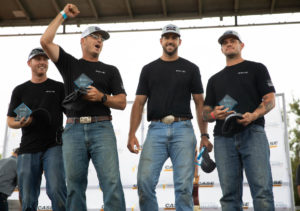 “It was pretty amazing, and really exciting,” said Yosemite Team Captain Kevin Gonzales, recalling the moment his team shattered the national record. “We all knew as soon as the pipe broke that it was a fast time, but when [the timekeeper] showed us the stopwatch, it was kind of unbelievable. And then to hear all the cheers from the other PG&E guys, and our wives and families who came to support us – I think they were even more excited than we were!” 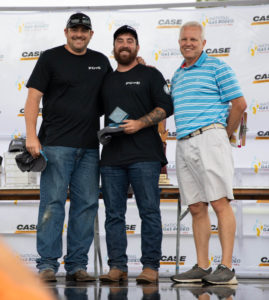 Yosemite shaved nearly 2.5 seconds off the time they posted in this same event during the local rodeo just five months earlier, and according to Gonzales, that outstanding improvement didn’t come easy. They practiced three hours a week for two months leading up to the competition, and during the week before they left for the rodeo, they trained every day. The team also hit the gym regularly to ensure they were in peak physical condition.

“It was a big commitment,” said Gonzales. “We just wanted to be the best that we could be.”

Not only did our members prove to be the best of the best our on the field, they also demonstrated exceptional sportsmanship from the sidelines. When a team from Northeast Wisconsin Technical College (the only college to compete at the Rodeo) broke their pipe cutter during the competition, the Local 1245 members of team Quiet Riot didn’t hesitate to lend their competitors the tool the needed to finish the event. 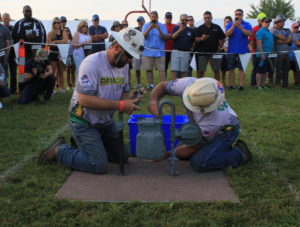 “I wanted them to have to opportunity to compete, but more so didn’t want them to be discouraged to not come back. Like I told them, ‘Quitters never win,’” Quiet Riot team member Steve Lange wrote on the National Gas Rodeo’s Facebook page. “Both NWTC teams impressed me with their perseverance.”

Overall, all the PG&E/IBEW 1245 teams performed extraordinarily well at this year’s event, which included 58 teams from 18 utilities across the nation, especially considering that most of our teams have only been competing on the national level for a few years, whereas teams from other utilities have been competing much longer. 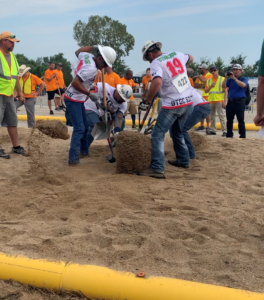 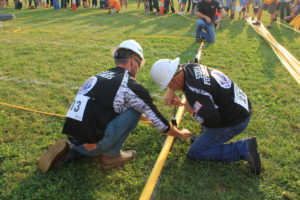 During the qualifying round, five of the six IBEW 1245/PG&E teams earned scores high enough to advance to the national finals. By comparison, last year, just one team of IBEW 1245 members – Quiet Riot – advanced to the finals, with another – Team Yosemite – just a few seconds shy of making the cut. The significant improvement in standing is evidence of their commitment to training and practice.

“These guys put in the work, and it clearly paid off,” said Local 1245 Business Rep Keith Hopp, who accompanied the teams to the Rodeo. “It was great to see our members get the recognition they deserve. At this pace, we’ll be seeing Local 1245 members dominating the entire leaderboard in the very near future!”