Eighteen gas construction teams and more than a dozen gas and electric locators showed off their skills at the Fifth Annual PG&E/IBEW Gas Rodeo, which took place on April 13, 2019 at the PG&E Gas Safety Academy in Winters. They competed for fun, bragging rights, and the chance to advance to the national and international rodeo events later this year. 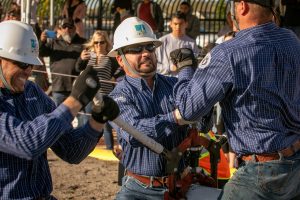 The Electric Locate, Gas Locate, and the Locate From Hell competitions got the crowd warmed up as individuals demonstrated skill and speed in front of the grandstand. Shortly thereafter, the Gas Construction team competition got off to a tremendous start, as two remarkable times were turned in during the pipe cut event. In the two-man team competition, the Manteca Gas Rats broke the national record in this skill event with a posted time of 9.97sec. And on the four-man team pipe cut, Team Yosemite posted a time of 8.06sec, which smashed the previous PG&E Rodeo record by more than six seconds, and is only two seconds off from the long-standing national record in that skill. 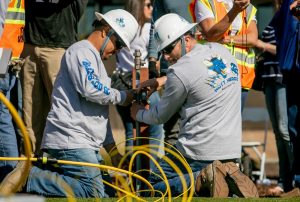 The competition was stiffer than it’s ever been, and several teams continued to break local records and put up impressive times in the meter set, service run, and hand dig events, which all led up to the final team relay. After the competition concluded and the final numbers were tabulated, the winning teams were announced, amidst much celebration and raucous applause from fellow competitors, who have a great appreciation for their brothers on the podium. This year marked the first time that the Gas Rodeo was open to competitors outside of PG&E, allowing several new teams from the gas contractors that support PG&E to compete alongside the GC teams. But in the end, the skill and ability of 1245 members at PG&E shined through, as our teams swept the podium in all classifications.

“The day out here was amazing,” said IBEW 1245 member Cavan Conner, who competed as part of the winning four-man “HOTT Headz” team. “We broke the record again on the service run, and we did really great on the pipe cut. But the one that won it for us would have been the relay. [At] three minutes and six seconds, we broke the PG&E record here, and that’s what got us to first place!” 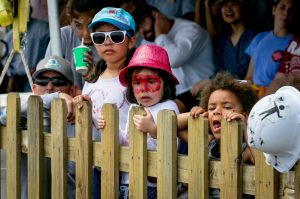 The Rodeo is a celebration of the work that gas members perform on a daily basis to keep our communities safely and efficiently fueled with natural gas. The activities for kids, live entertainment, raffles, free food and giveaways by the many vendors that sponsored the event made it a great day for all of the spectators who came out to support their family, friends, and coworkers. The moderate weather in Winters on this particular Saturday was ideal for all in attendance, and even though it wasn’t too hot, there was still a constant stream of kids and adults making a beeline to the always-popular snow cone truck.

“It’s a really, really fun event for the families. I look forward to bringing the family and the kids out every year,” said IBEW 1245 member Brad Husa, who competed as part of the winning two-man “Quiet Riot” team. “It’s great to come out and see how everybody is progressing with the events. Everybody is learning, and the times are getting better. But the biggest thing for me is the family aspect.”

Good times were had by all, and we look forward to reconnecting with friends from across the PG&E territory and seeing how the competitors continue to improve at next year’s event.

A hearty congrats to the top competitors who will be advancing to the national stage this year: