Retirement benefits are a central concern for IBEW members in general negotiations with NV Energy that begin this month in Reno, Nev.Opening proposals for bargaining were due to be exchanged July 13-14. The union came to the table ready to exchange, but the company said it was unprepared, so the parties only exchanged “cover letters”. The proposals will… [Read More]

NV Energy is seeking approval from the Nevada Public Utilities Commission for initiatives in renewable energy, energy efficiency and transmission construction. The 500 kv transmission line is intended to provide greater system reliability by linking the northern and southern systems for the first time, as well as expand renewable development in Nevada. The new line… [Read More]

NV Energy is seeking approval from the Nevada Public Utilities Commission for initiatives in renewable energy, energy efficiency and transmission construction. The 500 kv transmission line is intended to provide greater system reliability by linking the northern and southern systems for the first time, as well as expand renewable development in Nevada. The new line… [Read More] 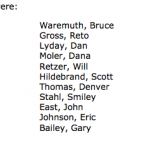 Retirement plans were high on the agenda when Local 1245 stewards from NV Energy convened at the Airport Plaza Hotel in Reno on May 13. Nearly two hours was spent discussing Cash Balance retirement plans with Neff McGhie, a pension actuary. Stewards also took a look at an actuarial study comparing the current retirement plan… [Read More]

“Eventually, each house will have a smart meter that will communicate back to the utility. There are all kinds of services that can then be created from that relationship.” Gary Smith, Nevada Energy Smart Technologies Program Director You may not see the meter reader often, but he or she stops by about once a month to read your… [Read More]

Sierra Pacific Power, a wholly-owned subsidiary of NV Energy, has entered into an agreement to sell its California electric distribution and generation assets to California Pacific Electric Co. (Calpeco), a newly-formed company jointly owned by Algonquin Power Income Fund and Emera Inc. According to a report by Reuters, Algonquin said it will offer to employ all… [Read More]

This is a reminder that proposals for upcoming bargaining with NV Energy (formerly Sierra Pacific) will be taken only in Unit Meetings listed below. Proposals must be seconded and carried by a majority vote of the members present to be forwarded to the Bargaining Committee. You can find a link on the home page to… [Read More]

Brothers, and Sisters: Yesterday, NV Energy notified Local 1245 of its intention to cancel the current labor agreement effective December 31, 2009. While NV Energy has not taken this approach with Local 1245 in the past, contract cancellation notices are not uncommon in collective bargaining. The current agreement will remain in full force and effect… [Read More]

SIERRA PACIFIC POWER CO/NV ENERGY Since emails have been sent out to members reminding them of unit meetings, attendance has been good. Attendance should stay strong as proposals must be presented in writing, seconded, and voted on by the membership at the unit meetings during the months of April and May. Invitations have been sent… [Read More]

A new procedure has been put in place for members to submit bargaining proposals for upcoming negotiations with Sierra Pacific Power, now known as NV Energy. The previous process frequently resulted in proposals that were not clear or understandable, or that conflicted with one another. We can help our bargaining committee be more effective by… [Read More]