Politics is a word many families leave off the dining room table but for IBEW 1245 political action is how we progress the middle class, protect our members, and keep good union jobs in our backyard. The November Midterm Election demonstrated just how important politics are to the working class. 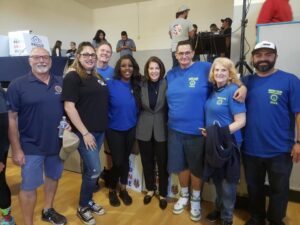 The collective power of IBEW 1245 was on full display in California and Nevada as crucial congressional, state, and local races were up for a vote.

In California, our Organizing Stewards were fired up and ready to get out the vote for endorsed labor-friendly candidates, successfully shifting the tide in several tough races across state. IBEW 1245 played a decisive role securing victories at the Modesto Irrigation District Board, the SMUD Board in Sacramento, and the City of Lompoc where decisions are made that directly impact our members. At the state level, IBEW 1245 Organizing Stewards helped deliver former labor leader Liz Ortega to the State Assembly. 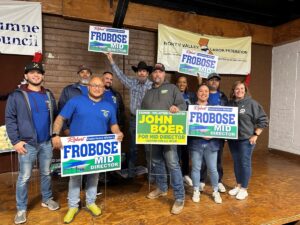 “We made 600+ contacts between emails, text messages, and phone calls to previous campaign volunteers and SBLC delegates to build turn out for phone banks and precinct walks,” said Lead Organizing Steward Brenda Balcazar. “It also proved to be very effective because each Saturday we had at least 80 canvassers or more ready to cover as much turf as possible. I am truly proud to be a part of IBEW 1245’s Organizing Steward program!”

In the battleground state of Nevada, IBEW 1245 mobilized more than 110 volunteers to the Silver State for the hotly contested gubernatorial and U.S. Senate races, both incumbent seats hanging in the balance by razor-thin margins. As the nation watched results live stream late into the evening on election day, the Senate retained its control with a victorious win for our 1245 endorsed candidate and ally, U.S. Senator Cortez Masto.

“Without the energy, drive, and commitment from IBEW Local 1245 and our release staff had we would not have retained Catherine Cortez Masto as our Senator,” stated Lead Organizing Steward and Retiree Rita Weisshaar. “I firmly believe their help made the difference  in Northern Nevada during a very negative media campaign.” 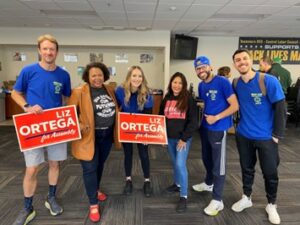 Team Alameda with Mia Bonta and Liz Ortega for Assembly

Over a four-week period, 49 Organizing Stewards and prospective Organizing Stewards were dispatched to five central labor councils – in Sacramento, Alameda, North Valley, South Bay, and Northern Nevada – in addition to Sonoma County and the city of Lompoc. They were joined by IBEW 1245 union staff, retirees, family, and friends.

“We have 1245 members working in all these key races, and it makes a difference, both for the candidates we support and the support we gain for our members interests in the future,” said Local 1245 Assistant Business Manager Hunter Stern. 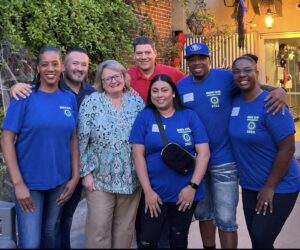 Team Sacramento with Rosanna Herber for SMUD Board

“Our work across California and Nevada made all the difference in getting IBEW 1245 endorsed candidates elected all while providing hands-on training to our members,” said Cruz Martinez. “They see firsthand why building relationships with politicians is important to protect and preserve workers’ rights. It was especially gratifying to see how many new volunteers and prospective Organizing Stewards participated and a reminder of how important it is to keep inviting our members to get involved!”

GOTV by the numbers

A Sample of Reflections from the IBEW 1245 GOTV Team and Labor Leaders:

Your folks were a big part of making all these wins possible in Nevada and for that I’m extremely grateful! Thank you for your leadership and for all the support you have given our program and the State of Nevada. -Liz Sorenson, President Nevada State AFL-CIO 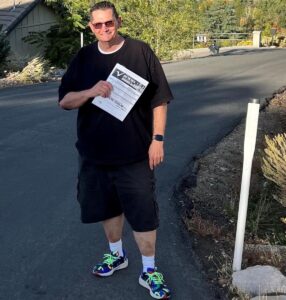 I had many conversations with current and retired union members thanking me for volunteering to knock on doors. I also had some conversations with members that were voting for the other candidates. For the most part these were chances to listen. The ability to have an intelligent chat with another person who doesn’t agree with you can be educational. -Tim Neal, Organizing Steward Prospect

Our success can be directly attributed to the hard work, commitment and leadership of the release time leaders and volunteers from 1245. IBEW 1245 continues to be the exemplar for all other unions on how to organize, run political program and build power for your members and for all workers. -Fabrizio Sasso, Executive Director, Sacramento CLC

This was a new experience for me helping with the upcoming local election. I had never phone banked or canvassed for an election before. There is a lot of work and preparation that goes into this process of which I was not aware. I feel privileged to have been able to meet and have conversations with people I would never have met if it were not for this volunteer assignment. –Rafael Burgos, Jr., Organizing Steward Prospect

Over the course of the general election we hosted thirteen organizing stewards who collectively knocked on more than 2,500 doors, made over 12,000 calls, and had high-quality conversations with more than 3,000 voters. Without exception every organizing steward was hard working, committed, and a pleasure to work with. -William Kelly, Acting Executive Director NVLF

I had a few great conversations with people who support Tim Robertson and Jessica Self, but the one conversation that stood out was with an elderly gentleman who came off slightly hostile in the beginning about why I was at his door. I stated the reason for my visit, and he excitedly said he supports Tim and Jessica and thanked me for reaching out to voters and wished more people would try to get politically involved. -Aileen Zuehlke, Lead Organizing Steward

I have learned so much in such a short time and I feel we are really making a difference in helping. Everyone has been so thankful and expressed their gratitude many times towards Organizing Stewards and IBEW 1245. I feel so proud to be a part of this union and such an amazing brother and sisterhood. -Kayela Jones, Organizing Steward Prospect