Known as the “City of Arts and Flowers,” the scenic, balmy city of Lompoc, CA is a hidden gem on California’s Central Coast. The palm trees, beaches, vineyards and Spanish style architecture make for an attractive home for Lompoc’s 45,000 residents – and the IBEW 1245 members who are employed by the City are dedicated to ensuring that it’s a great place to live, work and visit.

IBEW 1245 has wall-to-wall representation in Lompoc, meaning that (with the exception of police and fire) the union represents all 165 City workers, from the recycling plant to City Hall to the water department and everywhere in between. In true IBEW fashion, these members take great pride in their work, their skillset, and their union. 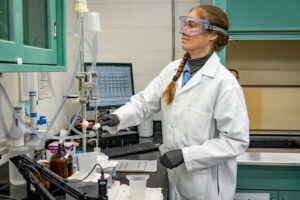 Lead Electric Utility Tech Steve Mickelson has worked for the City for almost 32 years, and has been an IBEW member ever since the Lompoc workers voted to join 1245 in 2013. The North Dakota native recalls seeing a job opening for an apprentice line worker in Lompoc. He applied for the job, and as he says, the rest is history.

Like many of his fellow technicians, Mickelson originally worked as a Journeyman Lineman, and after six years, decided to branch out and learn a different side of the business. He can often be found working at the Electric Receiving Station. His team of technicians is responsible for Lompoc’s two substations and five station class transformers. On any given day, there’s no telling what Mickelson is up to. 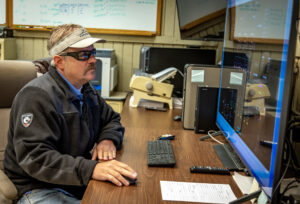 “We could be taking a breaker out of service for maintenance, to writing a 25-step switching order for the line crews, to installing commercial metering, to doing our mapping updates or taking care of SCADA issues,” he said.

The technicians also take on some Wi-Fi and camera work throughout the City.

“It’s a pretty wide variety,” he explained. “It’s everything in an electric utility, except line work.”

Vast Knowledge of All Kinds of Equipment

As a Lead Equipment Operator in Lompoc’s fleet department, IBEW 1245 member Seth Cannaday is part of a six-person crew that’s tasked with taking care of the City’s 325 vehicles. Their work includes basic preventive maintenance, like fluid changes, brake checks and safety inspections, as well as more complicated tasks, such as engine overhauls and transmission rebuilds. 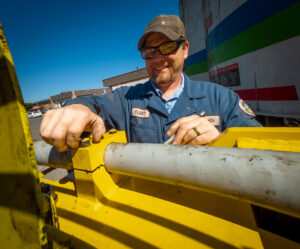 “Lompoc is kind of isolated, so we don’t have a big metropolis for outside support,” said Cannaday, who has worked for the City for 24 years. “And because we have an electric department, water treatment, parks, and urban forestry, we have to have vast knowledge of all kinds of equipment.”

He pointed out that even a routine tire change on an industrial vehicle can be a major undertaking. Take a compactor, for example – just one wheel weighs 6,000 pounds!

When the Utility Reporter caught up with Cannaday, he was working on a trash truck, removing the automated arm that picks up the garbage can, and installing a new one. Due to supply shortages, there is a multi-year wait list for some of the vehicles that the City needs replaced, which presents a unique challenge for Cannaday and his crew.

“We’re doing a lot more rebuilding and overhauling to make the equipment last longer than its technical life expectancies,” he explained. “This trash truck is way past its life cycle, but we have to keep it on the road for at least another two or three more years.”

Lead Street Maintenance Worker Chris Silva and his team play an integral role in road safety, from patching potholes, to sign and painting work in the streets, to repairing sidewalks lifted by tree roots. Their traffic safety shop replaces road signs and does stencil painting on the roads that need re-marking. 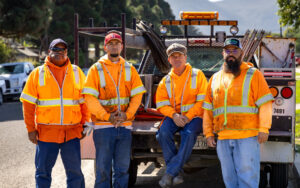 The Utility Reporter found Silva as he was testing out some new equipment the City was considering purchasing.

“We’re grinding out a bad area of asphalt, and we are going to replace it with new asphalt,” he explained. “We have a demo sweeper showing up to see how well it sweeps up the grindings, and then we will patch it back in.”

Some aspects of the job are less obvious but just as necessary.

As the members at the City of Lompoc approach the ten-year anniversary of the day they voted to join IBEW 1245, they’re able to reflect on the improvements that 1245 has made in their work and their lives. Many of the members at Lompoc had previously had different representation, and the difference between then and now is notable. 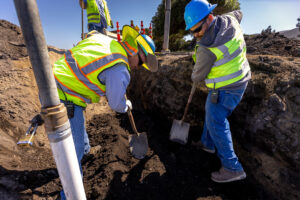 “Since IBEW 1245 has come in, it’s been more fair. With every negotiation, we’ve always gotten something,” said Cannady. “[Before 1245] we were losing massive pay and having furloughs. Always backwards, not forwards.”

“The union has really helped our wages, that’s for sure,” Mickelson noted. “[During bargaining] they did a really good job with the extra benefits, just by knowing the electrical side, and what’s important to the line workers and the technicians—overtime pay, standby, things like that. They’ve really helped us. I’m very happy with 1245.”

As founding members of their Local 1245 unit, the Lompoc workers know how important it is to stay informed and active with the union.

“I try to attend every union meeting I possibly can,” said Cannady. “I try to encourage everybody to go. If they’re not going, they’re not knowing.”