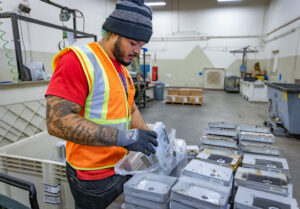 When PG&E’s meters, regulators and other gas and electric equipment need a checkup (or are ready to check out), they come to the hard-working IBEW 1245 members at the Gas and Electric Meter Service (GEMS) facility in Fremont.

PG&E Utility Worker Diamond Williams works in the electric meter shop, sorting each piece of equipment to identify its next step.

“I grab the meters, I type in the batch number on each meter. I enter it in SmartTrack. SmartTrack will determine if the meter needs to be QAed, or if it needs to be tossed,” Williams explained. “Over the past few months, we’ve been caught up on a lot of the meters. So now we are retiring the majority of the meters, because we’ve done enough QA.” 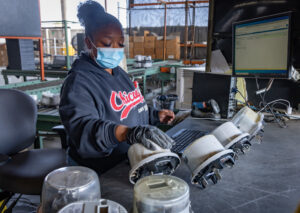 Williams has been in this role at GEMS for about eight months, but she has previously worked all over the PG&E system.

“I’ve done different assignments. I’ve been in different places, tried different things. I’ve been an operating clerk, I’ve been a material handler, and now I’m a utility worker,” said Williams, who has been with PG&E as a hiring hall employee since 2015. “I eventually do want to become permanent. I’m open.”

On the gas side of the GEMS facility, 42-year IBEW 1245 member and Senior Meter Regulator Mechanic Bill Stage uses an automated gas regulator tester to make sure the equipment is up to snuff. 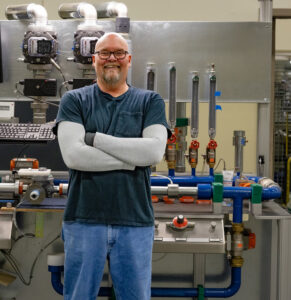 “I QA test all the regulators that come in from the vendors and that we are going to ship out to the field,” Stage explained. “I make sure that they all operate correctly, within the boundaries of the regulators.”

Stage explained how gas regulators take the 60 pound pressure from the street and reduce down to seven inches, around a quarter of a pound, which is the operating pressure for homes and meters. The regulators also serve an important safety purpose.

“If something happens inside the house where the gas line gets blocked or something like that, and the pressures go high, this regulator will shut the service off,” said Stage. “And if there’s a leak, it will also detect that, and if it gets below the operating pressure, it will slam shut the meter or the regulator.” 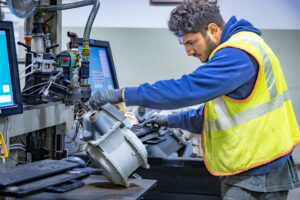 Williams, Stage and their co-workers value the fact that they have IBEW 1245 in their corner.

“Well, I’m a big fan of the union,” said Stage, who served as a 1245 shop steward for 38 years. “They’re always looked out for people’s rights and benefits, for all the employees. And in my humble opinion, IBEW is one of the strongest unions that I’ve ever heard of.” 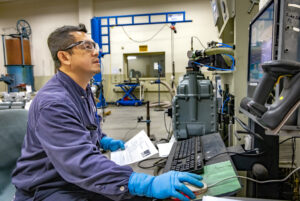 “I think the union’s great. I have no complaints at all,” said Williams. “I’m not a permanent employee —  I’m through the hiring hall — but we still have union reps that protect us, and I love it.”