IBEW Local 1245 has had success in the legislative arena before – in fact, we’re well-known around Sacramento as a powerhouse union that knows how to advocate effectively on behalf of our members. But our past successes pale in comparison to the legislative victories we achieved in 2022.

We approached this legislative session with an incredibly ambitious agenda – most years, we have just a handful of priority bills, but this year, we had 13. Some of those bills were rife with opposition, and we were ready to fight. And when it came down to the wire, we didn’t hesitate to activate our army of organizing stewards to make sure our voice was heard loud and clear through the halls of the Legislature. 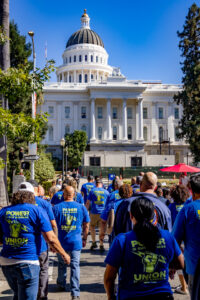 We ended this legislative session with an astounding 12 of our 13 bills passing through both the Assembly and Senate. This is a testament to the relationships we’ve built with lawmakers on both sides of the aisle. The level of state and federal funding secured for work that our members perform during this single legislative session is absolutely extraordinary. But we will likely never see another legislative session like this one, for a number of reasons:

First, we had an unprecedented amount of state funding available from a huge budget surplus.  The federal government’s COVID relief economic stimulus bills not only funded state and municipal governmental services (thereby saving the jobs of hundreds of our members working for these public agencies), but the overstimulation of funds actually resulted in a record California State Budget of $308 billion (including mandated rainy day funds of $20 billion) with a surplus of approximately $100 billion to be spent over the next five years.

The Governor’s end-of-session Climate Action bill package will reallocate and spend at least $20 billion of that budget surplus for climate initiatives that accelerate transportation electrification, building decarbonization, and other technologies and initiatives where IBEW members do the work. A large portion of these funds will be used to leverage tens of billions of dollars in federal funding to support EV infrastructure, wildfire mitigation, hydrogen hubs and carbon capture utilization and sequestration – all work performed and supported by IBEW 1245 members. 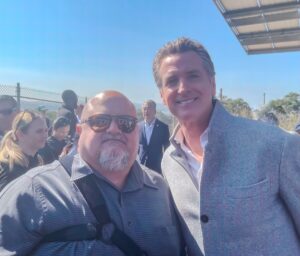 This $20+ billion in California climate spending, in addition to the $20 billion in spending for undergrounding of distribution lines, plus the subsequent $20-$30 billion of federal spending from the Infrastructure and Investment and Jobs Act (IIJA) and the Inflation Reduction Act (IRA), will mean HUGE amounts of funding for our members’ work over the next 5-10 years, rising to never-before-seen levels. These funds do not include the $2.5 billion GreenLink transmission project in Nevada, nor does it include the $14 billion in transmission work estimated for our jurisdiction in California over the next 20 years.

Read on to learn more about the bills that IBEW 1245 sponsored in 2022, and how they impact our members.

SB 846 (Dodd) provides for a loan of $1.04 billion to PG&E to keep the Diablo Canyon Power Plant operational for an additional five years, set rates for power as well as energy produced additional $7 per MW. It also includes additional funding for DCPP operations and to facilitate the approvals of key agencies, like the State Lands Commission and Dept of Water Resources, to complement the DOE Civil Nuclear Credit Program and other federal funds under both the IIJA and IRA.  IMPACT:  The bill extends work for 1245 members at the plant for five years for each unit, plus hundreds of 1245 and Building Trades workers who are called in to perform extensive outages. It also maintains funding and extends existing retention plans for the five-year extension period, subject to CPUC approval. STATUS: This bill passed both Houses at the end of the session, and Governor Newsom signed SB 846 on Friday, Sept 2. See more coverage on this bill here.

SB 884 (McGuire) includes a ten-year utility power line undergrounding program, and optional language for any large utility to participate.  The bill also requires PG&E to pursue all federal funding for this work, including the wildfire protection funding in the IIJA from last year. In the meantime, PG&E is claiming it will underground 10,000 miles of distribution lines over the 10-year period.  IMPACT:  This is roughly $2+ billion of 1245 work per year for 10 years, with all investments being rate-basable for PG&E. The vegetation management securitization provisions were excluded, but we intend to come back and pursue them next year. Even if the company does only two-thirds of the 10,000 miles of planned undergrounding, it will be $12-$15 billion in work to be performed by 1245 members. STATUS: SB 884 passed the Legislature with strong bipartisan support and is pending the Governor’s signature at the time of publication. 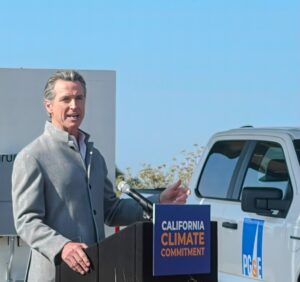 SB 905 (Caballero) lays out the Carbon Capture, Removal, Utilization and Storage (CCUS)  Program, and requires it be up and running in California by 2024. The bill also positions CA to leverage all federal subsidies for CCUS, which were approved in the IRA, making carbon sequestration viable for continued operation of gas-fired power plants.  IMPACT:  CA Carbon Sequestration will support grid reliability and thereby extend continued large natural gas use, supporting work for our gas department members at PG&E.  Gas throughput won’t be at today’s levels, but will remain significantly higher than forecast by many environmental advocates, employing all gas workers for indefinitely longer than previously anticipated. STATUS: SB 905 passed the Legislature and Governor Newsom signed it on Friday, Sept 16.

AB 1279 (Muratsuchi) codifies California’s commitment to reach carbon neutrality by 2045. To achieve this target, the state needs to reduce its fossil fuel use by 91% – a target that the California Air Resources Board has prioritized in this year’s climate change blueprint. Carbon neutrality means balancing the volume of greenhouse gases that are emitted with the amount removed from the atmosphere.  This bill was tied to SB 905, in that each had to pass to enable the other. IMPACT: This bill helps the IBEW generally and 1245 specifically by accelerating all efforts to decarbonize, especially transportation electrification, which is the sector the State is farthest behind. This will create work for hundreds of 1245 members, both PG&E and contractors, to build out utility infrastructure to support EVs. STATUS: This bill passed the Legislature and Governor Newsom signed AB 1279 on Friday, Sept 16.

AB 1757 (Garcia and R. Rivas) sets targets for removing planet-warming carbon from the atmosphere with nature-based methods, such as planting trees, restoring wetlands and scaling up public landscaping and urban forestry projects. IMPACT:  This will have a direct benefit by reducing wildfire risk in high wildfire areas and reducing fuel load through improved forest management practices, thereby greatly reducing fire (and associated credit) risks for all utilities employing 1245 members. STATUS: SB 1757 passed the Legislature and Governor Newsom signed it on Friday, Sept 16. 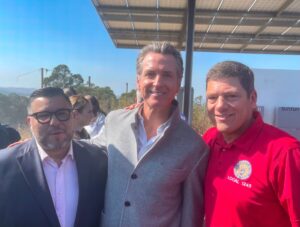 SB 1020 (Laird) sets interim targets for generating clean energy. Current law requires 100% of retail electricity to be provided by renewables and non-GHG sources, like as wind and solar, by 2045. This law accelerates that rate, requiring 90% by 2035 and 95% by 2040. In addition, all state agencies must source their energy from 100% clean sources by 2035, ten years sooner than law now requires.  IMPACT: This bill will accelerate clean energy creates jobs for 1245 members to increase capacity on utility distribution systems. It is expected to drive significant investment in California transmission grid to accept and deliver an increased volume of clean energy to customers throughout the state, creating work for 1245 contractors. The CPUC affordability requirement should reduce subsidies for non-utility products/services, and focus more of the customers’ rates on direct electricity and gas service, greatly benefiting 1245 PG&E members. STATUS: SB 1020 passed the Assembly and Senate, and Governor Newsom signed it on Friday, Sept 16.

SB 1157 (C. Garcia/Limon) prohibits new oil and gas wells or extensive retrofitting of existing units within 3,200 feet of homes, schools, nursing homes and hospitals, and requires operators to take certain steps at the thousands of existing wells within that buffer zone. Operators must monitor toxic leaks, emissions and install alarm systems. In addition, new requirements would include limits on noise, light, dust and vapors. IMPACT: This bill is a double-edged sword. On the one hand, some of the provisions that would apply to natural gas infrastructure facilities suggest 1245 members would receive more maintenance work for PG&E to meet the requirements. But the lack of clarity around CPUC oversight remains. So, we must monitor the implementation and challenge folding natural gas facilities into new regulations that are inconsistent with existing CPUC regulations for the same arena. STATUS: SB 1157 passed the Legislature and Governor Newsom signed it on Friday, Sept 16.

AB 2316 (Ward) requires the CPUC to establish a community energy program that allows customers to subscribe to community renewable energy sites. The community projects would be built under prevailing wage requirements. At least 50% of the customers must be low income. This would be built and owned by utilities.  IMPACT: This bill creates work for either inside or outside contractors to build Community Solar sized projects, owned by the IOUs.  The bill somewhat mimics the SMUD Solar Shares program that allows new homes to meet the solar energy requirement by purchasing power from these projects. It also allows low income customers to gain access to solar power, installed by IBEW contractors. STATUS: This bill passed the Legislature and was signed into law by the Governor on Sept. 16.

AB 2143 (Carrillo) requires prevailing wage be paid for any qualified Net Energy Metering tariff rooftop solar installations that have a generation capacity of 15kW or greater, exempting residential customers. Also requires access for NEM installations for low-income residents without adding to cost shift. IMPACT: This bill finally establishes a prevailing wage requirement on the biggest energy subsidy in CA. This creates pressure on anti-union solar contractors to use IBEW signatory contractors, and slows the expected increase of NEM cost shift.  STATUS: This bill has passed the Legislature and is pending the Governor’s signature at the time of publication.

AB 1717 (Aguilar-Curry) expands the definition of “public works” to include fuel reduction work done under contract and paid for in whole or in part out of public funds performed as part of a fire mitigation project. Work must be performed per state apprenticeship or certification training program. IMPACT: When work identified as wildfire mitigation and funded in some way with state funds, IBEW 1245 tree contractors can bid the work at prevailing wage rates.  This work could be county requirements on private lands, county and state park lands, as well as federal lands. STATUS: This bill has passed the Legislature and is pending the Governor’s signature at the time of publication.

SB 1075 (Skinner) requires the Energy Commission to study and model potential growth for hydrogen and its role in decarbonizing the electrical and transportation sectors of the economy, and helping to achieve specified goals.  The study specifies information relative to the deployment, development, and use of hydrogen. The bill would require the state board to consult with the California Workforce Development Board and labor and workforce organizations. IMPACT: The bill requires the State of California to determine the viability of hydrogen as a clean fuel and its use.  We expect such use would be through existing gas infrastructure, helping to retain 1245 gas worker jobs. STATUS: This bill has passed the Legislature and is pending the Governor’s signature at the time of publication.