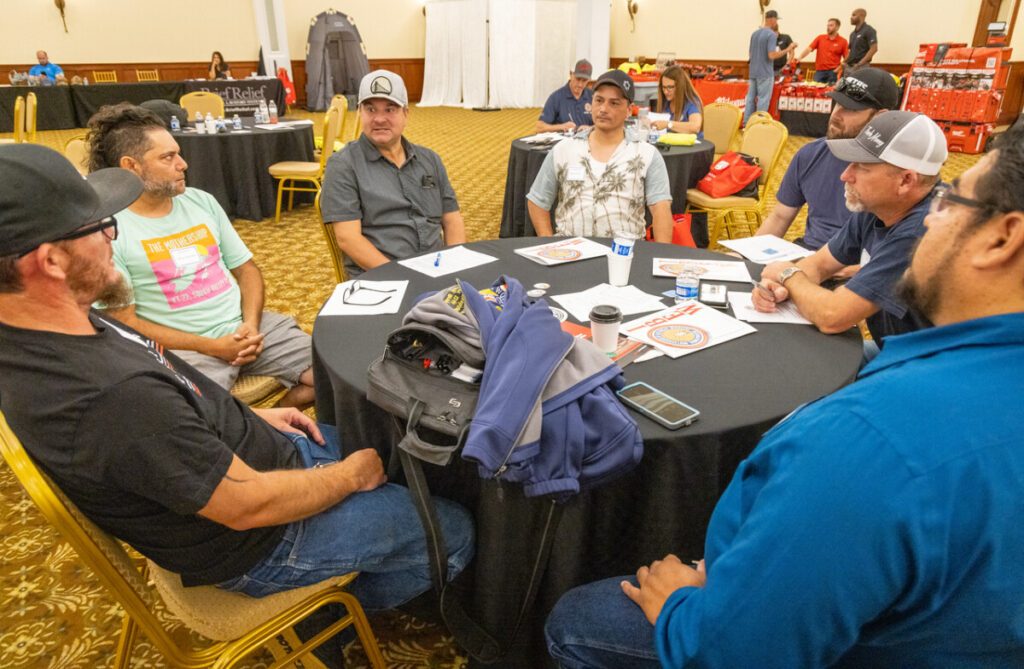 IBEW 1245 Control the Pressure Safety Summit at the Sunrise Center in Vacaville, Calif. on July 6, 2022

On July 6, 2022, fifty IBEW 1245 safety stewards in the Control the Pressure (CTP) Peer-to-Peer Safety Committee met for a Safety Summit at the Sunrise Center in Vacaville, California. The summit marks the first in-person gathering in two years since the onset of the pandemic.

A moment of silence for fallen members

Safety Committee members Leo Lopez, I&R Tech from San Jose, and Roy Cabral, Lead Gas Tech from Modesto, welcomed the group and led them in a moment of silence in remembrance of the men and women who have died on the job. The backdrop was a photograph of thirty four year old Corey Dunne together with his wife and three young children. Dunne, an IBEW 1245 member and PG&E Gas Foreman, was fatally injured on May 6, 2022 following a gas explosion at work. 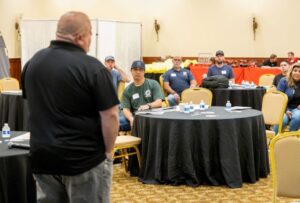 IBEW 1245 Business Manager Bob Dean thanked everyone in the room for their commitment to build a safety culture across our properties. “Mostly I just want to say thank you. As much as we’re doing, we’ve lost one of our brothers this year. The goal is to not lose anyone else, not a hand or an eye,” said Dean. “It’s hard to walk up to someone and say, ‘Put your PPE on.’ The hard conversations are what’s going to keep us alive.”

The group screened the new CTP video which interviewed both stewards and rank and file members who testified to the critical role each 1245 member plays at the work site. IBEW 1245 Senior Assistant Business Manager Anthony Brown summed up the sentiments when he declared, “Safety first, last, always. There’s nothing else to it.”

Under the leadership of IBEW 1245 Business Rep Fred Aboud, the Peer-to-Peer safety program has continued to blossom. Hold the Pull (HTP) launched in 2010 by IBEW 1245 linemen reaching out to their peers to stop the spate of near misses and deaths. It met with much success and was quickly followed by Control the Pressure (CTP), Keep the Clearance (KTC) and most recently, Regulate the Voltage (RTV). Outside Line Construction 1245 members have also begun to hold roundtable discussions on safety. To date, more than 280 safety stewards hailing from Northern California and Nevada and from multiple employers across the 1245 territory have volunteered to have tough conversations at work to promote a safety culture. The CTP group was originally comprised of PG&E and NV Energy safety stewards and has now has reached other properties such as TMWA, City of Roseville, SMUD, MID and TDPUD.

Joe Gonzales, a 36 year PG&E veteran and IBEW 1245 member, and Kevin Conant, a PG&E Safety Specialist, addressed the group. Gonzales riveted the group with a string of stories from when he was a young Gas Rep to when he was a seasoned, safety-conscious Foreman over his 36 years with PG&E.
“When I was first hired, I was invincible. What an idiot I was. I had no idea about safety until we were doing a job, closing off a valve, a pancake valve. Me and another partner put the pancake valve in. We’d done the task many times before…it blew,” exclaimed Gonzales. “Shrapnel in my chest and neck. It was a life changing event and I decided to help out, to help people make the right decision.”

He described another occasion on Christmas Eve, 2006, when a gas leak escalated into a house explosion, killing a grandfather and severely burning his daughter and 17-year-old granddaughter. The investigation concluded that corners had been cut two years prior leading to the explosion.

“The decisions we make have consequences,” said Gonzales. “If we follow our procedures, our green book, it’s written in blood. Because something bad happened and had to be put it in writing. We must put safety first. If we follow that, we can eliminate accidents like this from ever happening again. We are working with explosives every day. I’m asking you to take it to heart. Pay attention. Put it into practice in the field.” 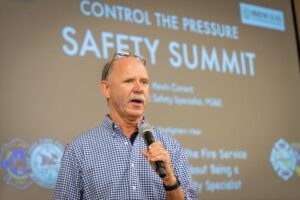 PG&E Public Safety Specialist and former Battalion Chief from the San Jose Fire Department, Kevin Conant, shared, “You are making it cool to talk, to say ‘Stop, I have a question.’ ” Conant shared a video which captured a recent grassroots safety training at Treasure Island that showcased the interface of first responders including PG&E, IBEW 1245, police, and fire. The video emphasized the importance of developing a shared vocabulary and communication system.

Tools, shared his company’s commitment to safety in the trades and the 7 pillars of health and safety, including ways to promote:

The day was interspersed with raffles, lunch, and sidebar conversations across work groups.

CTP safety stewards divided themselves into breakout groups to discuss ways forward. All shared the value of site visits and pitches in the yards, especially after covid made in-person meetings nearly impossible.

Fred Aboud closed the session saying, “At the end of the day, the whole idea is communication. To be able to communicate with your Advisory Committee Member. We are here to prevent ‘this’ (pointing to the picture of brother Dunne with his family) from happening,” declared Aboud. “You are the last defense in the field. This is our goal: for our members to go home at the end of the day.”