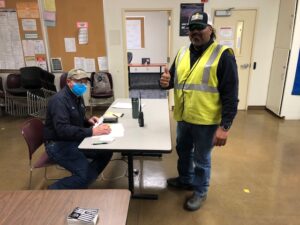 Jesse Delgado gives it a thumbs up while checking in with Voting Judge Larry Orlando before voting on the Tentative Agreement.

Negotiating for the Union were members Jesse Murrill, Mike Keate, John Sanders, and myself.