The day started out like any other for IBEW 1245 members Dave Quaresma and Chance Tarr, who work in the line department at Modesto Irrigation District. The two were putting in wire and doing secondary make-up in a residential area of Mountain House, where construction of a new subdivision is underway.

But in an instant, the ordinary day took a turn.

“We were splicing a wire together, when all the sudden we heard screaming. We didn’t know what to think. We looked at each other, wondering if we were in a dangerous spot,” recalled Tarr, an apprentice lineman.

Some construction workers nearby were yelling in Spanish. Quaresma and Tarr didn’t understand what they were saying, but they could tell something was urgently wrong. They saw someone pointing in one direction. Quaresma and Tarr, who had been working part way underground, quickly climbed out to see what was going on.

What they saw took them aback — a young boy was dangling from a small ledge outside a second-story window. He had pushed out a screen on the window, climbed out, and was dangerously high in the air. They weren’t sure how long he had been hanging there by his fingers.

“I looked at Dave and he looked at me, and we both read each other’s minds. We grabbed the ladder and ran over,” Tarr recalled. “Dave went to talk to the boy, telling him, ‘Hang on buddy,’ while I set up the ladder. Before I could climb all the way up, the boy had already transferred over, while Dave was holding it stable below.”

A neighbor alerted the child’s father to the situation. The father had been working, and was unaware that his son had been able to remove the window screen and climb out. He was extremely appreciative of the effort to rescue his son.

“It all happened in a matter of minutes. I’m glad we were there to ladder up and help him down. He definitely could have injured himself, broken bones or something [worse],” Tarr explained.

Tarr spent four years in the Marine Corps, where he gained experience responding to emergency situations. He also credits the training he has received from his employer and as a member of IBEW 1245.

“Power line work is very dangerous. People can get hurt. You need to be prepared for someone falling off a pole, out of a bucket truck, or getting an electric shock,” Tarr said. “The union asks a lot from their guys, but it’s to make sure that everybody is able to perform in any situation … Situations happen, and you have to be prepared for them. If something happened to me, I’d be very confident that my brothers and sisters would assist and help out, instead of being a bystander.”

By maintaining high safety standards, IBEW 1245 members are trained to assess every situation for safety: they evaluate the dangers, minimize the risks, and stop the work when a situation becomes dangerous. On this day in Mountain House, these two IBEW members utilized those skills to the fullest.

“I’m glad that we had the training and the ability to help the boy, and that it all worked out and that he is safe,” reflected Tarr.

In recognition of their quick and heroic action, the MID Board awarded a Resolution of Commendation to the two linemen. 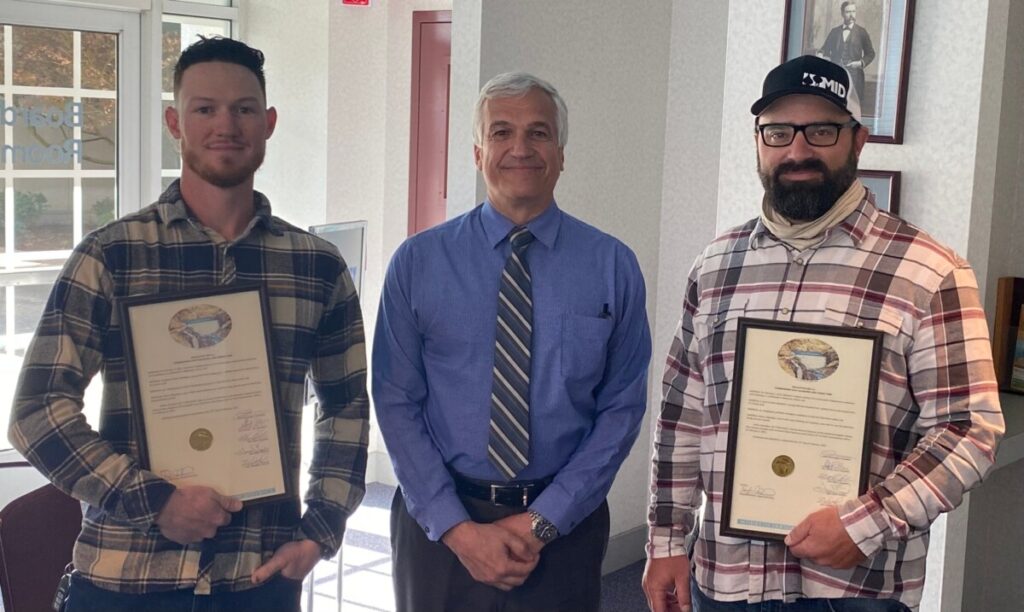