We were working in the Orinda Hills, doing pole changeouts. The year was 1997, and I was a young IBEW 1245 journeyman lineman at the time, working in outside construction. The job package contained poles that were mostly inaccessible by bucket truck, and many of the poles were rotten, including the one we were working on that day. It was a double circuit 12kv. The lower circuit was line and buck.  It was, by all accounts, a hairy job. But I was young, unafraid, and undaunted. At the time, I had little respect or fear of 12kv. Despite being a young journeyman, I had a great deal of confidence in my ability. 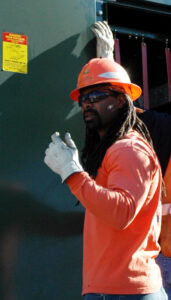 My pole partner and I started our work on the new pole — putting up cover, framing the pole, and so on. When it came time to transfer the wire, I volunteered to go over to the old pole. We already knew the pole was rotten, and the wire was the only thing holding it up. We had the line truck grabbers holding the pole at the phone level.

Back then, there was no rubber gloving the 12kv in California. Besides, were working off the pole anyway. We were in hot stick mode, and I was working in leather gloves only. We were using a crossarm gin to assist in transferring the wire, using hotstick. As I recall, we moved the bottom roadside 12kv phases out on a hot arm to give us room to work. We then applied hard plastic light-weight conductor cover to the phases — a decision that, undoubtedly, ended up saving my life.

We successfully transferred the two roadside 12kv phases on the top circuit, using hot sticks and an arm gin for assistance. The phases were already covered with similar lightweight hard plastic cover, which we married together to provide protective cover while working.

I went up into the primary area to retrieve the arm gin. Keep in mind, I am now in the primary with leather gloves only. At that time, this was permissible, since we were in hotstick mode, and the phases were covered. If I recall correctly, even in hotstick mode, lineman were required to carry rubber gloves on their belt. The decision to not put on rubber gloves was a near-fatal mistake.

Although the arm on the new pole was slightly higher than the arm on the old pole, the weight of the cover sagged the conductor down within an inch or two of the old arm. Throughout the wire transfer process, and my attempt to retrieve the arm gin, the protective cover would constantly hit the arm as the phases moved while my pole partner and I worked the poles.

The crossarm gin was primarily insulated fiber glass, but the base was metal. The plastic cover on the inside top phase conductor began to separate while I was in the process of removing the arm gin, which was situated between two hot phases. My right hand came into contact with the metal portion of the base of arm gin, as the 12kv conductor came into contact with the crossarm. That’s when I got hit with the 12kv.

My first thought was, “What the f*** is going on?” My second thought was, “I am being electrocuted!” My third thought was the one you always hear about — my life flashing before me. My last thought was, “Stay alive!” But the buzzing in my brain overwhelmed me. Then I was gone. All this happened over a period of approximately 1-2 seconds.

While I was hanging upside down, lifeless on the pole, the crew was in full panic mode. We were in an area with little to no radio communication. The groundman hopped in a truck to get to an area where he could get a signal out to call for help. My pole partner was on the other pole and trying to get to me. The foreman was trying to get a bucket truck in position to assist with a pole rescue. I only know all of this because they told me later after I had regained consciousness. They also told me how I screamed in agony as I was being electrocuted. They told me how terrified they were, how they were certain that I was dead. They told me that as I fell through the lower circuit, my arm hit an energized phase hard enough to knock to plastic protective cover we installed off and to the ground. I wish they had not told me that, because it haunted my nightmares for quite some time.

They told me I hung upside down on the pole for several minutes before I regained consciousness. As my senses slowly retuned, the first thing I noticed was a strong, unmistakable smell of burning flesh. As my vision returned, I noticed that the leather glove on my right hand had been burned away, revealing my hand where the electrical current entered my body. Three fingers on my right hand were burnt. Not a pretty sight for sure, but I felt a sense of relief that it was not worse.

I struggled to upright myself and detangle myself from the block rigging we were using to transfer the wire. My pole partner was trying to tell me to stop moving around so much, and to just be still. I was not in any position to argue, so I did what he said for once. To my foreman’s disliking, my pole partner pulled out his knife, and cut away the blocks that I had somehow become entangled in.

My foreman was able to get a bucket truck to the phone level. After I regained my senses fully, I assured everyone that I could manage to get down to the bucket. They reluctantly agreed. Not much of a choice.

A few minutes later, I was on the ground, sitting with my head down. My preference was to pace back and forth, but again, I was in no position to argue, considering I had been electrocuted. I had to sit down, and be humble. At this point, I was mostly feeling embarrassment and shame. I was prideful of my skill and my ability. But as they say, “Pride comes before a fall.” That day, all pride was gone, and the fall was humiliating. I was told an ambulance was on the way.

When the ambulance arrived, I was laid on a stretcher, headed for the hospital. As the medics were examining me, they removed my line boots. My socks, on the bottom, were burned away, where the electrical current left my body.

I spent the rest of the day and half the next day in the hospital. Apparently, one of the effects of being electrocuted is that your blood cells become contaminated due to the extreme heat energy generated in your body. I needed a fluid change. I remember the unsettling conversation I had with the doctor. When I said I had “passed out”, he corrected me and said I had, in fact, died. Semantics, I thought to myself, but the seriousness of the accident starts to sink in a little deeper.

The stay at the hospital was not all bad. I got a lot of care and attention from the nurses. I supposed it’s not so common to have someone so young and virile in the ICU (their words, not mine). And it is definitely not common to have a high-voltage electrocution survivor.

The next day I got many calls from concerned family, checking on me (this is pre-cell phone era, so they had to use the hospital landline service). Safety Inspectors, Risk Management and the Superintendent from the construction company came to the hospital to visit. The main thing I took away from them was that I should come back to work the next week so that this does not become a lost-time injury.

The accident happened on Thursday, I was released from the hospital on Friday, Monday was a holiday, and ironically, I had a funeral to attend on Tuesday. I was back at work on Wednesday, with bandages on my burned feet and hand. My family was not too happy with my decision. But even after all that I had been through, I still had that lineman mentality — “If you fall off a horse, you get back on.”

When linemen are electrocuted and killed on the job, their life story ends abruptly for them — but not for their family, friends, and fellow coworkers. I have a somewhat unique perspective on being electrocuted, in the sense that I saw the end of the story for me, and somehow survived to not only hear the story from my crew’s perspective, but to also see what I would have missed out on had I not survived. Since all my family was in town for the funeral for my grandmother’s passing, I also got lectures from each and every one of them on how upset and concerned they were about my careless actions.  I explained to them that I screwed up, and I paid the price. Had I not survived, everyone else would have had to live with that, except me.

I have been a IBEW 1245 member for 31 years. This accident happened 25 years ago. I worked as a lineman and foreman for 13 more years before I joined the staff at IBEW 1245 as a Business Representative, and later Assistant Business Manager, and now Senior Assistant Business Manager. I have been married for 21 years. I have two sons, ages 18 and 14.  I have had countless moments of joy with family and friends since the accident. 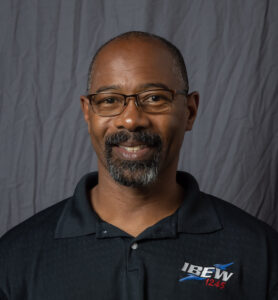 Scars fade, memory fades. Maybe that is why they say time heals all wounds. But recently, during a safety presentation at a 1245 union staff meeting, we were invited to speak about any serious accidents that we had witnessed or been involved in — and that was the first time I had ever recounted the story of my electrocution to my co-workers. That wasn’t just happenstance. The accident is something that I rarely speak of and have worked hard to forget. It had a deeply personal effect on me, leaving physical and emotional scars that I carried silently for years.

It’s still hard for me to talk about that day and the days that came after. But, if sharing my experience might help someone else avoid a fatal mistake, I figured retelling the story was long overdue.