Nine years ago, a dynamic group of 28 IBEW 1245 activists came together to form what has now become one of the most powerful union organizing cadres in the nation.

Known as organizing stewards, these dedicated and skilled 1245 unionists are ready and willing to jump into action – whether it’s descending on the Capitol to lobby legislators in Sacramento, crashing a press conference in San Francisco, getting out the vote for pro-union candidates in Lompoc, or clogging the phone lines during a critical CPUC hearing, this intergenerational activist army is known from coast to coast as the folks who can get things done.

“As organizing stewards, you provide the muscle that gives us the power to affect change for our members, beyond what we can accomplish at the bargaining table,” 1245 Business Manager Bob Dean told the 2022 class of organizing stewards during their first meeting of the year in January. “Our work is far from over, and our enemies are not gone, they’re getting stronger. This year is going to be vital for us – but you’re on that front line, and I appreciate the work that you’ve done and are continuing to do.” 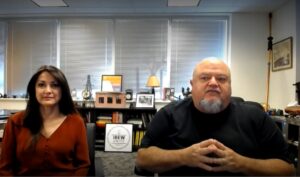 From its humble beginnings, the organizing steward program has continued to grow in leaps and bounds, even during the pandemic, and this year’s class tops out at colossal 150 organizing stewards. On Jan. 29, they came together virtually for 1245’s annual organizing steward kickoff and initiation (due to the Omicron surge, the annual event was held over Zoom).

“Although we could not meet it person, it’s still nice to see our brothers’ and sisters’ smiling faces through the screen,” said longtime Organizing Steward Brittany Santana.

After a rousing welcome from Dean, IBEW 1245 President Cecelia De La Torre delivered the oath to the stewards as they were officially sworn in to this honored position. The kickoff event also included a look back at some highlights from past campaigns, as well as a look forward at the fights looming on the horizon. The event concluded with an emotional farewell to longtime staff organizer Fred Ross, one of the original architects of the organizing steward program.

“As someone who is new to organizing, I found [the organizing steward induction and kickoff] nothing short of inspiring. I’m thankful to be afforded the opportunity to work with such a motivated group of people who seem to share common interests and a high level of camaraderie!” said new organizing steward Mike Tilden. “Thanks for including me and I’m looking forward to learning as much as I can!”

“The event was well put together and I felt part of the IBEW 1245 union family immediately.  The highlights were seeing other members who rallied others for the cause to help pass certain bills through the legislature,” said new organizing steward Nicole Frazier. “As a new organizing steward I felt the fire, and it was encouraging. As long as we stick together as a IBEW 1245 union family, any issue we come against can be addressed and conquered.”

“Our local has built a movement from this program, and I am honored to be part of it alongside our brothers and sisters,” said Assistant Business Manager Rene Cruz Martinez, who oversees the organizing program at 1245. “We are in a crucial time to grow our membership and continue to cultivate relationships and engagement with our members and the organizing stewards are vital to this work at our jobsites and in our communities.”