For new Local 1245 member Bradley Bond, who works as a Utility Technician for Island Energy, joining IBEW 1245 just made sense. 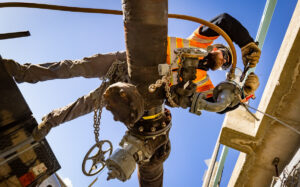 “My biggest draw to being part of 1245 was having [representatives] that have come from the field, or the utility industry as a whole, and have a much better idea of what we do,” said Bond. “So when we do have issues that arise, we’re not having to explain everything in such detail and starting from zero.”

When the Utility Reporter caught up with Bond and his crew, they were working with contractors to replace a section of pipe and perform some gas system maintenance for the main feed for Mare Island in Vallejo. 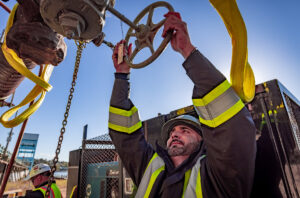 “We’re tied into PG&E via a 10-inch main on the Vallejo side, on the other side of the Carquinez Strait. Our pipe runs alongside the Causeway Bridge above ground, and then dips down under water for the lift span on the bridge. Comes back up, runs back along the bridge,” Bond explained. “And we’re replacing a section of pipe that is on the west side, just as the gas main comes back up vertical above water.”

“What we’re doing as Island Energy is just making sure that we are isolating the pipe in a safe manner to be able to allow the contractors to perform their work underneath the bridge,” he continued. “We have hired a scaffolding crew, a crane, traffic control, and contracted out some welding for our gas pipe replacement piece.”

Island Energy is a small subsidiary of the Pittsburg Power Company. Owned by the City of Pittsburg, Island Energy provides electric and natural gas services on Vallejo’s Mare Island (which is, technically, a peninsula). For over a century, Mare Island served as a naval shipyard and employed as many as 10,000 people during its peak. In 1993, the shipyard was decommissioned, and Mare Island began to transition into a multi-use (live and work) community. The US Navy subsequently awarded Pittsburg Power Company a franchise service agreement to provide electric and natural gas retail services on Mare Island, where they operate as Island Energy. 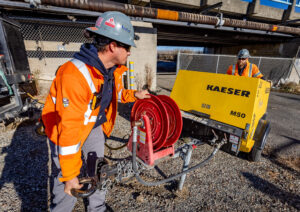 Bond and his co-workers from Island Energy first reached out to join IBEW 1245 in autumn of 2019. At the time, the workers were already part of a Teamsters-represented the City of Pittsburg public works unit, which initially precluded IBEW from organizing the workers there. The Teamsters subsequently agreed to a bargaining unit modification, the Island Energy Utility Maintenance Workers, Utility Technicians, and Utility Lineworkers unanimously petitioned the city to become their own IBEW-represented unit in 2020. 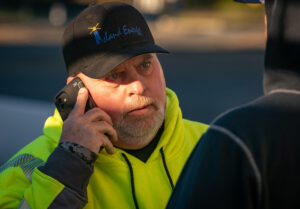 Within months, the newly formed 1245 unit unanimously ratified a one-year agreement, and they also successfully negotiated wage equity adjustments ranging from 14-20%, despite the challenge of bargaining during a global pandemic. The 1245 agreement contains several other improvements to the existing Teamster MOU, including improved standby language, improved overtime provisions, new rest period and meal language, and union leave time for shop stewards and officers. Additionally, IBEW and the City agreed to language that required the parties to conduct a salary survey for IBEW classifications, meet and confer over market rate equity adjustments, and, if applicable, recommend to Council to adjust wages to the median of comparison agencies. 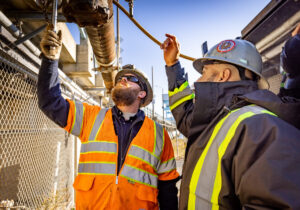 “With IBEW 1245, we’ve got a good working environment, and a great contract. We have a good team helping us negotiate our contracts,” said Bond, who served on the negotiating committee along with Utility Technician Sonny D’Amico. “We also get a lot in regards to… being able to understand what other utilities are doing and being able to bounce different ideas off of them.” 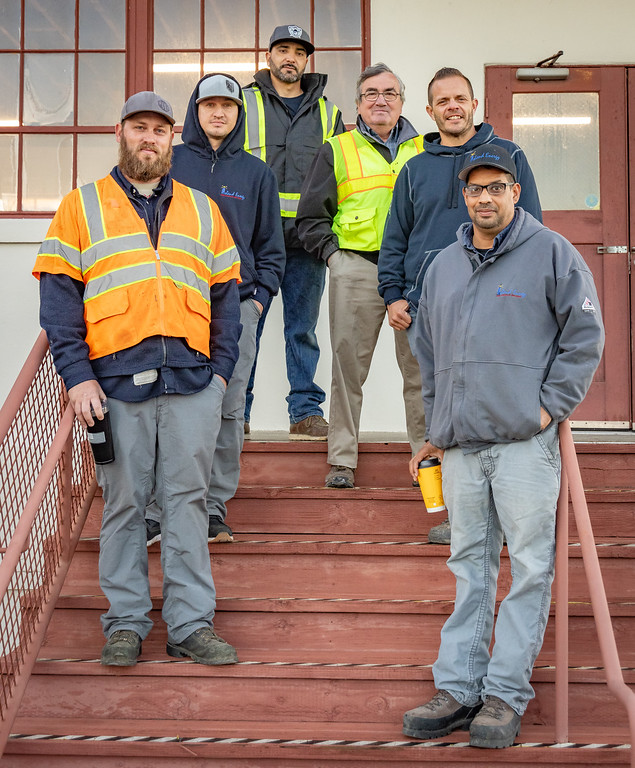