IBEW 1245 members demonstrated once again that they’re the cream of the crop at this year’s International Lineman’s Rodeo, which took place in Kansas City from Oct. 13-16, 2021. 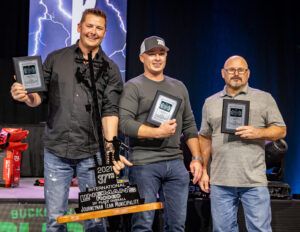 The decorated IBEW 1245 journeyman team of Dustin Krieger, Josh Klikna and Steve Johnson from Turlock Irrigation District came back ready to reclaim their title in the Municipal Division. The TID team placed first in this division in 2015, 2016 and 2017, and came in third in 2019 following an off year in 2018. This year, they were back in full force, and once again took home the first place trophy in their division. 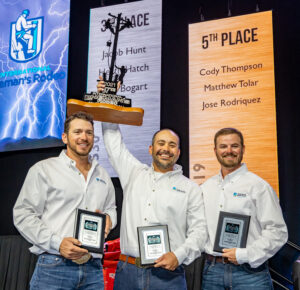 Seasoned competitor and 1245 member Dustin Curry — whose team won the Rodeo back in 2018 — joined up with fellow 1245 journeymen linemen Brandon Dance and Nick Noriega from PG&E to compete in this year’s event. The team quickly proved themselves to be among the best out there, placing second in the Investor-Owned Utility (IOU) division, and fourth overall in the “Best of the Best” category. 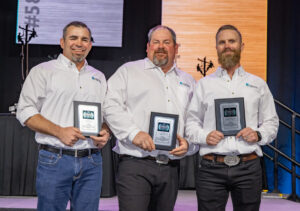 Another 1245 championship team — JP Richard, Adam Beene and Anthony Albright — rounded out the IOU leaderboard, placing fourth in the IOU division and 9th overall in “Best of the Best.” This powerhouse team from PG&E won the Rodeo back in 2014.

Additionally, IBEW 1245 journeyman lineman and Rodeo championship holder Jacob Hunt from PG&E competed with his old teammates Luke Bogart and Heath Hatch to grab third place in “Best of the Best” and first place in the contractor division, while IBEW 1245 journeyman Christopher Miles from Henkels & McCoy teamed up with Austin Irzyk and Joe Gunter to secure the fourth-place award in the Hurtman Rescue event. 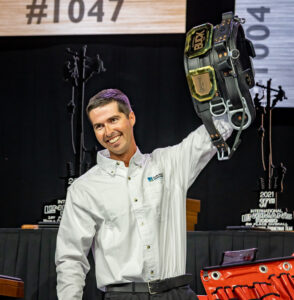 In the apprentice division, 1245 apprentice Aaron Sabato from PG&E blew the competition out of the water, coming in first place overall in the “Best of the Best” category with 488 points – a full 10 points higher than the 2nd place competitor. Sabato also nabbed first place in the Apprentice IOU category, as well as first place on the written test, capturing 88 points in just 7 minutes and 46 seconds – nearly four minutes faster than the second- and third-place competitors. 1245 Apprentice Austin Trevino from PG&E also took home an award, placing fourth in the Hurtman rescue.

A hearty congrats to all the other IBEW 1245 apprentices and journeymen that competed!

At the end of the day, I didn’t think my score was high enough to win the overall. I figured I was just going to win the written category, and that was it … Once they said my name [as the first place apprentice overall], it was a little unreal. I really owe it all to all the guys who gave me little tips and helped me along the way. Everyone out here [from 1245] supports each other, they just want to help you do better.  —  PG&E Apprentice Lineman Aaron Sabato