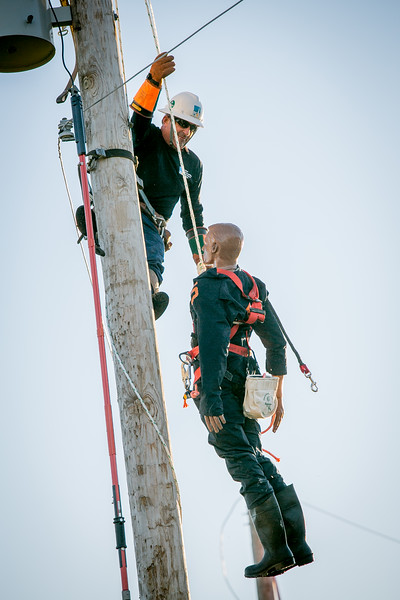 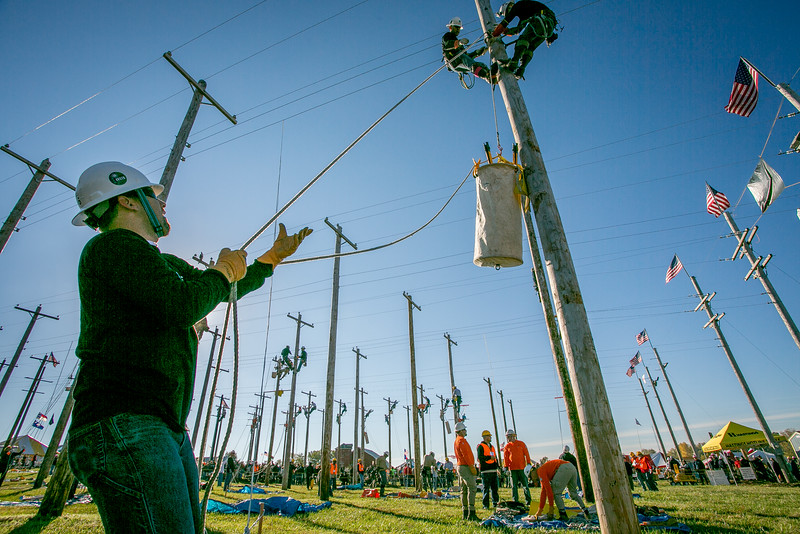 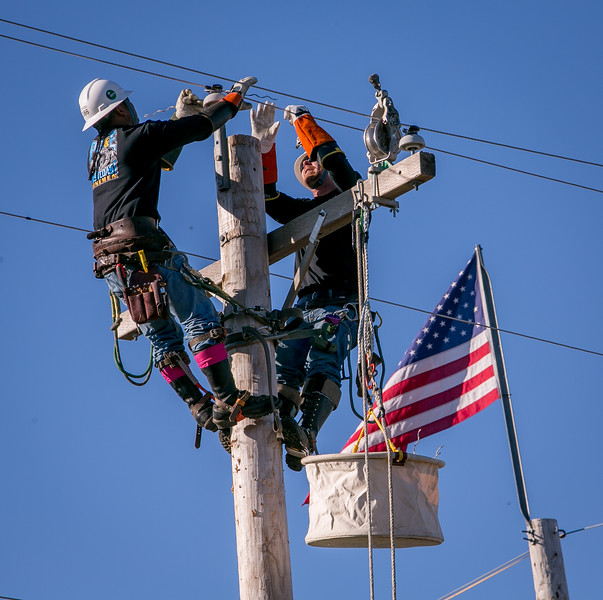 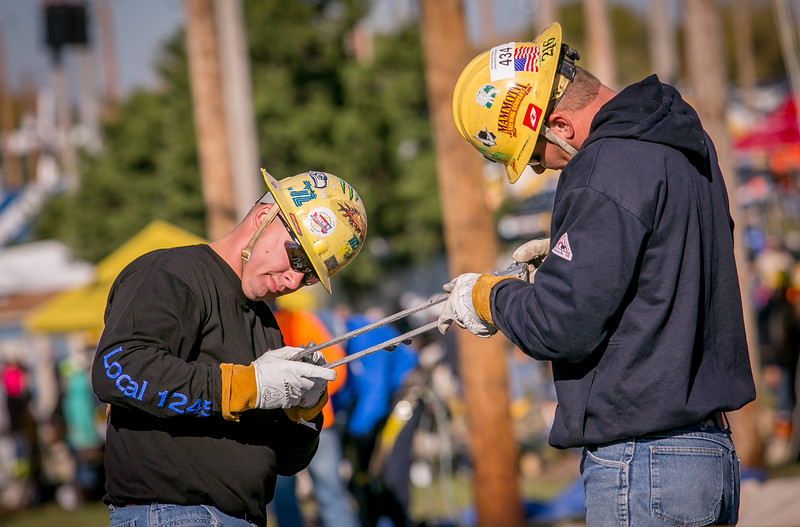 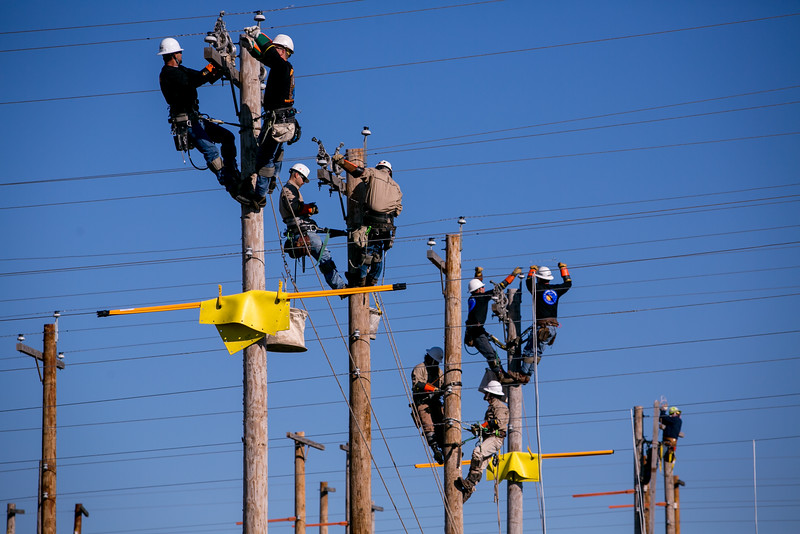 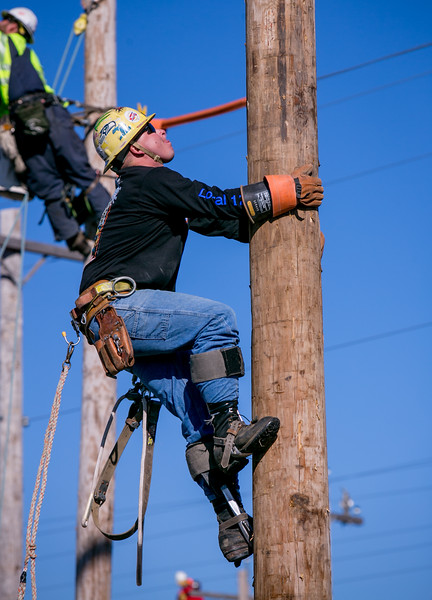 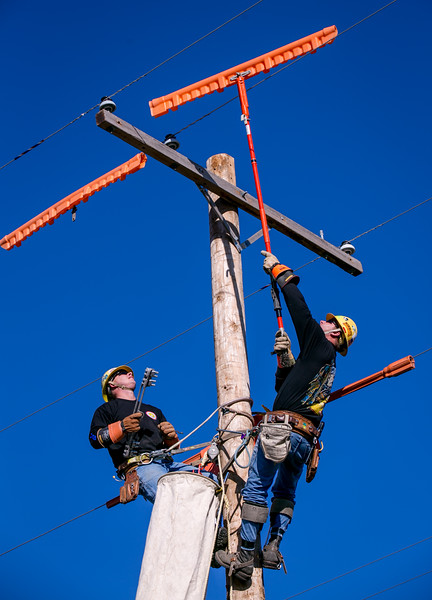 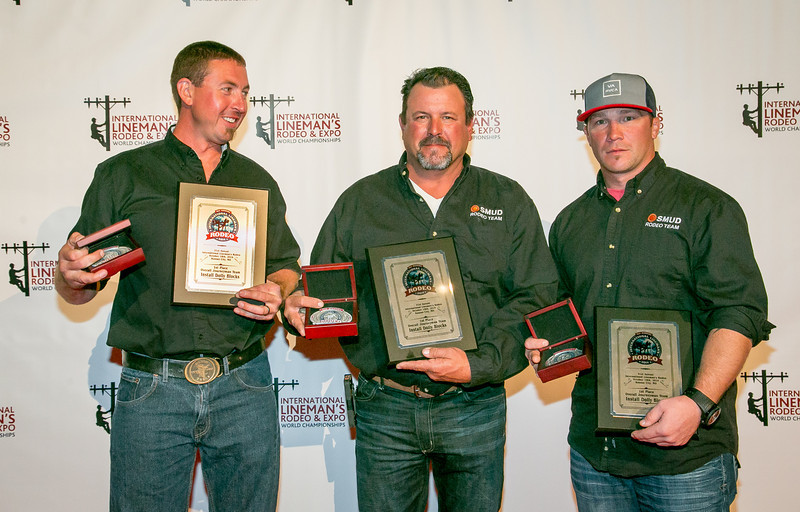 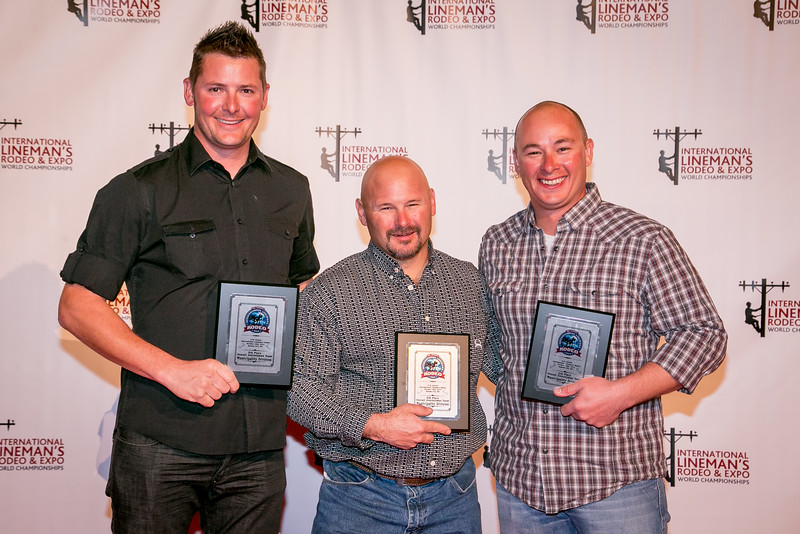 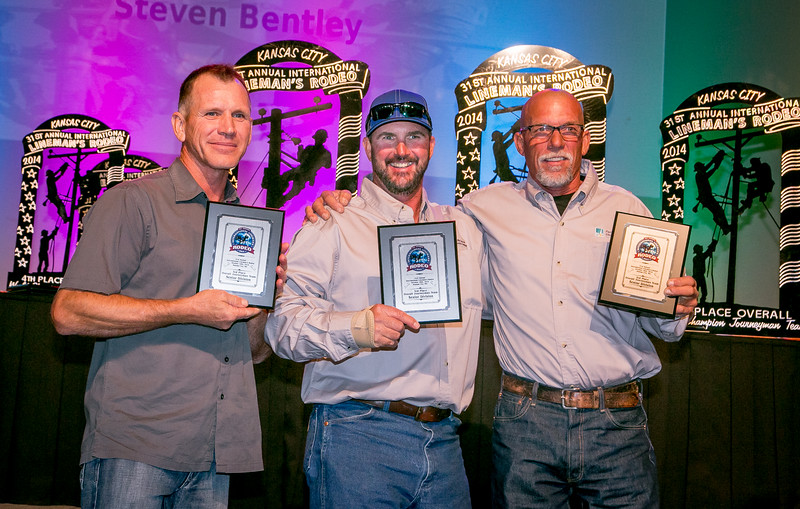 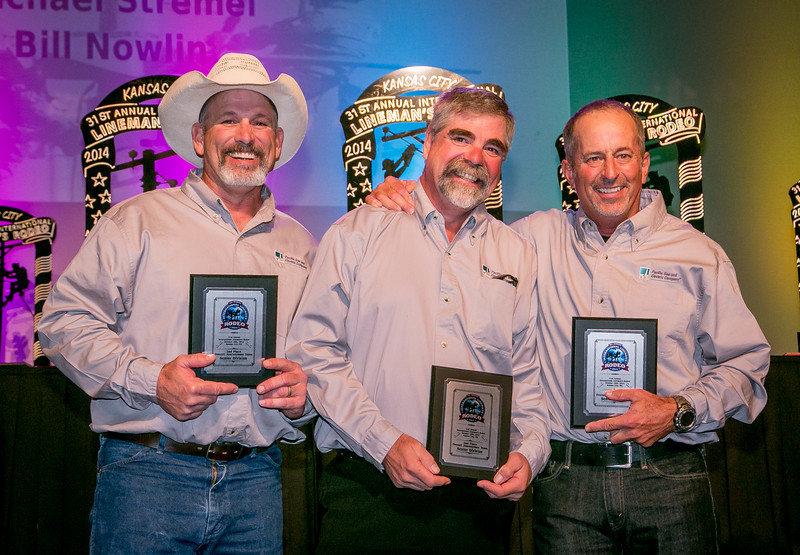 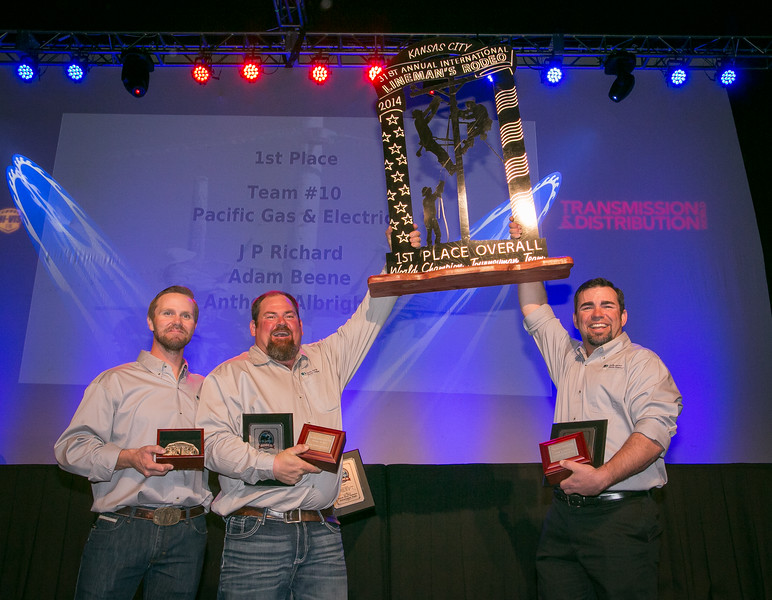 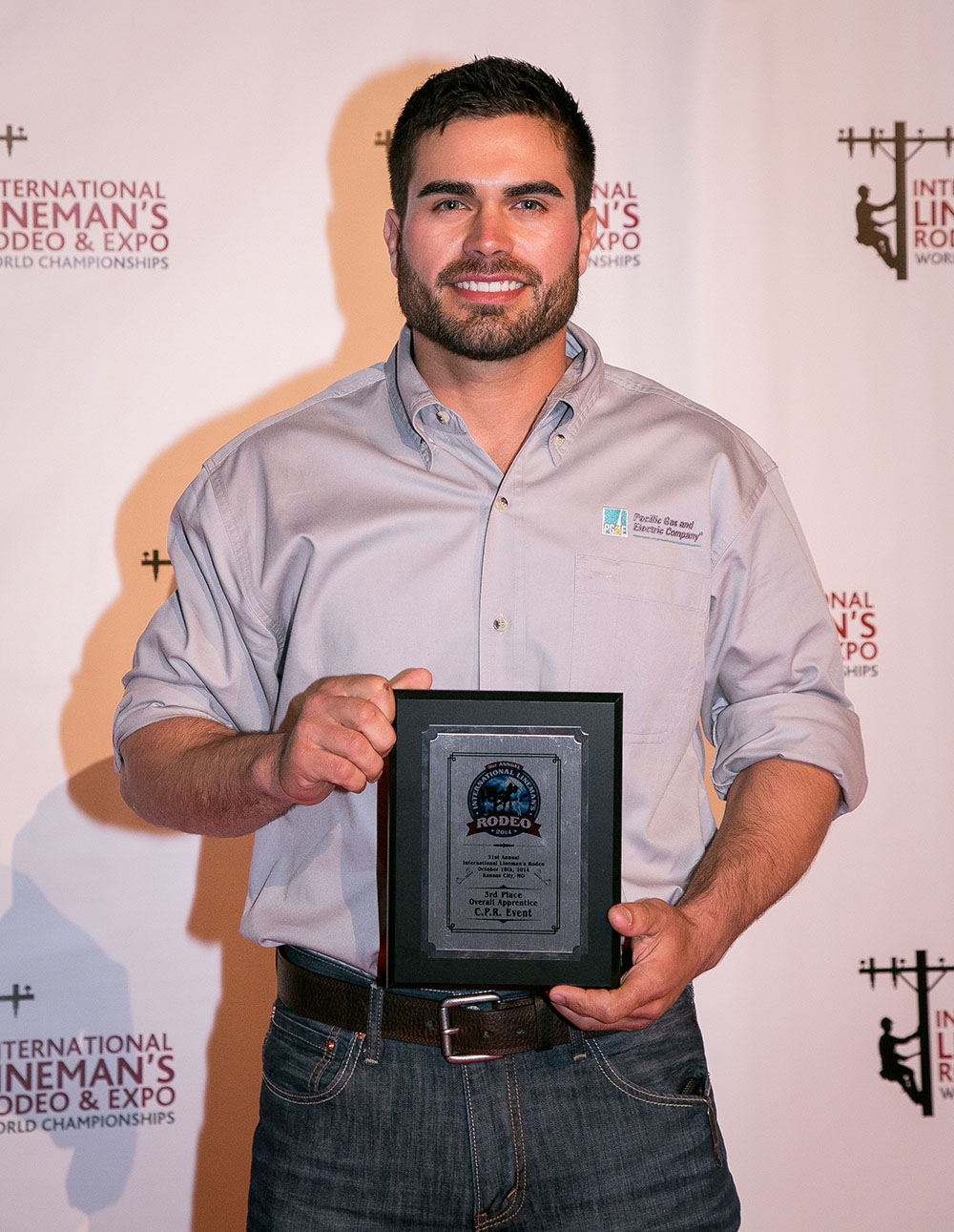 The 31st International Lineman’s Rodeo in Kansas City proved to be a very big night for IBEW 1245. Teams and apprentices from PG&E, SMUD and Turlock Irrigation District (TID) made trips to the podium to receive numerous awards, and by the end of the evening, one team from Local 1245 would be walking away with the first place overall prize.

The Kansas City rodeo has become the Granddaddy of the many lineman rodeos that take place each year. This year’s event had a record number of participants, with 255 apprentices and 205 crews competing. The international rodeo is as much about competition as it is a celebration of the trade and the brotherhood that linemen share with each other. It’s also a unique opportunity for teams from all over the world to measure their skills against their peers.

Without a doubt, the biggest stars of the weekend were JP Richard, Anthony Albright and Adam Beene, the IBEW 1245 crew representing PG&E from Grass Valley. The trio made several trips up to the stage during the course of the awards ceremony to receive awards for various events. As the banquet at the Overland Park Convention Center drew to a close, the PG&E and IBEW tables were buzzing with excitement. Could the crew capture one of the top five overall awards? As the overall awards began, it became obvious who the top team would be. Sure enough, the boys from Grass Valley came in first place overall, taking home the big hardware.

Even Richard, Albright and Beene were surprised at their success. The experienced team has competed at rodeos in Hawaii, Portland and Los Angeles, as well as the PG&E/IBEW rodeo in Livermore. This was the 3rd straight year the team competed in Kansas City, and they were certainly aiming to get an award or two, but they didn’t expect the come in first.  All three are unassuming and don’t necessarily exude the ego or bravado often associated with the stereotypical lineman. In fact, their happiest moment may have been when two of their co-workers from Grass Valley, Steve Bentley and Jim Moon, were called up to the stage to accept 2nd place in the senior division (George McNeil, an instructor in Livermore, was the 3rd member of the crew).

All in all, a very impressive accomplishment for the tiny Grass Valley yard where half the electric department competed in Kansas City. Looks like the yard will need to build a new trophy case!

Other 1245 award winners included PG&E apprentice Mike Moreno, who came in 3rd place in both the hurtman rescue and CPR events. Tanner Boren placed 11th in the overall apprentice division.  TID’s crew finished 5th overall in the municipality division, and a team from SMUD placed 4th in the crew hurtman rescue event. In addition to the Grass Valley PG&E crew placing 2nd in the senior division, a crew from Bakersfield GC PG&E placed 3rd in the same category. Members from Nevada Energy and Liberty Energy also competed in Kansas City and made an impressive showing.

Congratulations to all the competitors from Local 1245. The real honor was to be there competing. We look forward to another successful and victorious rodeo next year!