After many months of bargaining, IBEW 1245 and SMUD reached a tentative agreement, which was subsequently ratified by the members by a vote of 352-48 (88% in favor). The new four-year MOU includes general wage increases on Jan. 1 of each year — 3.5% in 2022, 3.0% in 2023, 3.0% in 2024, and 3.25% in 2025. The agreement includes several other enhancements as well, including double time for all overtime as well as all Mutual Aid work, and additional equity adjustments for several classifications, including Line (11%), Elec Techs (7%), Cable Splicer (3%), Substation Construction Foreman (2.5%) and Cable Splicer Construction Foreman (2.5%) 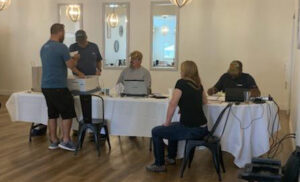 The union secured a new Crane Certification premium of $.95 an hour for all hours worked for all Crane Certified employees; a 33% increase (from three hours to four hours) in On-Call pay for Sat/Sun; and a 100% increase (from three hours to six hours) for SMUD observed holidays. A new two-hour minimum is in effect for all on-call call outs (previously, the minimum was just for the first call in a 24-hour period). The agreement also includes a 66% increase in the Asbestos wage premium from $.60/hr to $1.00/hr for certified asbestos work, and an increase to the Class A premium from $1.00/hr to $1.15/hr. The union also eliminated the two-tier wage schedule for the Hydro Operator Series, Distribution System Operator Series, Power System Operator Series, Material Specialist III, IV and Line Equipment Operators.