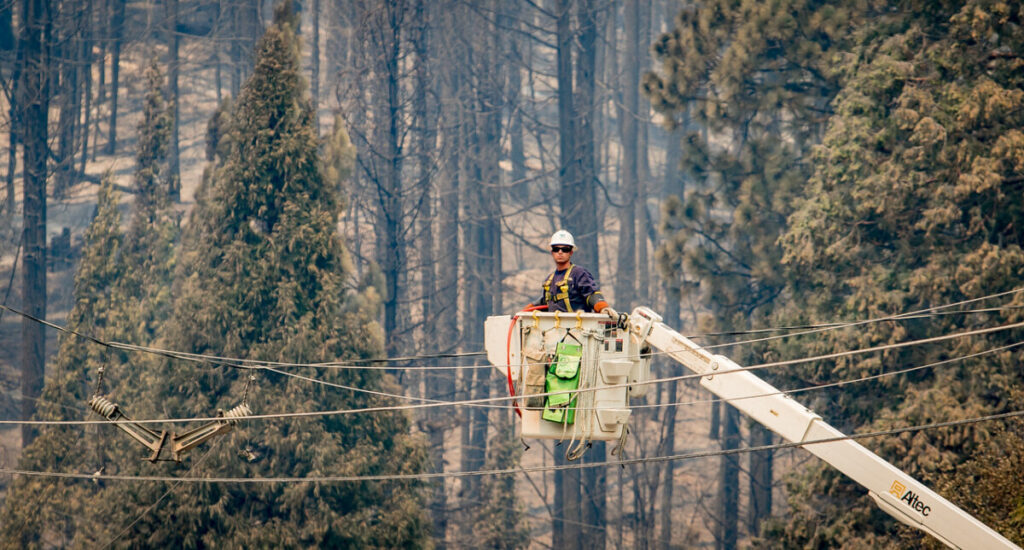 On the scene at the Dixie Fire 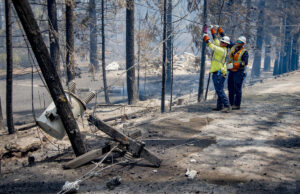 On July 13, the Dixie Fire broke out in Feather River Canyon and quickly spread across the Sierras. As of this publication on Aug 18, Dixie is now the second-largest wildfire in California history. According to CalFire, the fire has burned over 635,000 acres, and is currently at 33% containment.

The Utility Reporter caught up with IBEW 1245 members from PG&E in early August as they worked in and around Greenville, CA – a small mountain town in Plumas County that was essentially leveled by the Dixie fire. 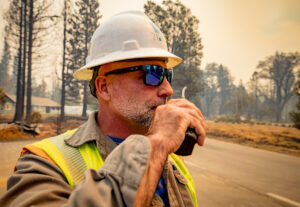 “We got four crews up here going through the area, making it safe so fire personnel can safely travel through the roads,” said Terry Daniels, who works for PG&E GC Transmission out of Chico. “There are poles that are burned, wires that are suspending loads over roads, over driveways. And with the trees being burned, the wind that could be pushing those trees down.”

Crews were also working on a transmission line further up the canyon endeavoring to restore power to the area. 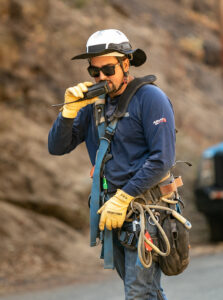 “We’re working to get a shoo-fly built so we can get a 300 and some customers hot,” explained Pete Gallegos, PG&E GC crew foreman out of Red Bluff. “It’s real steep, rocky, extremely difficult terrain. We’re using helicopters, because we can’t get any equipment in [on the ground]. So it takes longer.”

While the helicopter assistance is critical to complete the work, it’s not always comfortable for the crews on the ground.

“The ash and the dust underneath these helicopters, it’s just everywhere. We’re picking dirt out of our ears and our noses for days after we’re done, and it gets in your eyes too,” said Gallegos. “We’ve dealt with much more difficult than this, but every situation is challenging, and we’re problem solvers. We’re just solving problems.” 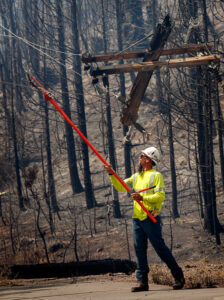 The IBEW 1245 members are able to focus on the work at hand because they know that the union has their back.

“Without the union, we wouldn’t have the wage we have and the ability to provide for our loved ones,” noted Daniels.

“When I call [the union] they answer, and when I had problems, they helped me fix it,” Gallegos added. “They keep the company straight.”