IBEW 1245 member Pam Pendleton is a natural born leader. From her years of service in the United States Navy, to the pivotal role she played in helping to organize her co-workers at Sunoptics to join IBEW 1245, Pendleton has a long track record of stepping up and getting things done. 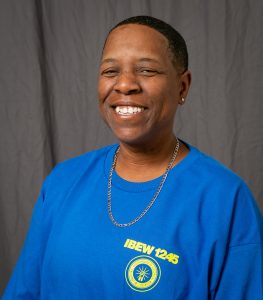 When she decided to move on from Sunoptics to pursue a career at PG&E, Pendleton landed in the Gas department, but within a couple of years, she found a better fit in the Insulation and Coating, or I&C, department (also known as GC paint). A hard worker and a quick learner, Pendleton quickly earned the respect of her co-workers and supervisor, and after five years in the department, she was recently promoted to Foreman – making her to first woman in the history of the department to hold this position.

“Although I’m strong and I’ve done a lot of the work, I wouldn’t be where I am without the doors that IBEW Local 1245 opened for me,” Pendleton emphasized. “When [the promotion] was finally officially announced, I felt really proud. I never thought I’d ever make foreman here … But here I am!” 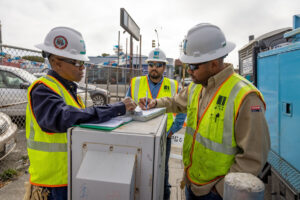 “Before the pandemic, I attended a conference called ‘Groundbreaking Women in Construction,’ and today, I do consider myself a groundbreaking woman in construction, because I have broken the ceiling here in this department!” she added.

As a woman in a male-dominated workgroup, Pendleton has encountered her fair share of challenges, but she’s faced each obstacle head-on, embracing the opportunity to demonstrate her resilience. 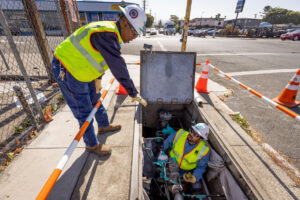 Pendleton (left) directs her crew in the vault

“I won’t sugar-coat anything by saying that I haven’t had some bumps in the road… at times, it’s been a struggle to make my way. It’s not always been easy, but here I find myself now,” she said. “I have a great crew, they’ve been really supportive. And I appreciate everything that my supervisor did. He was really pushing this. Those that have been supporting me, they know how hard I’ve worked. I have many people that are so happy for me, saying how deserving I am to be here.”

For any women on the physical side who wish to follow in her footsteps, Pendleton has some sage words of advice. 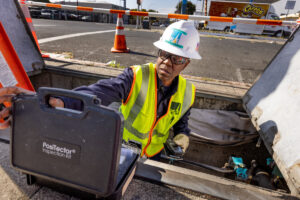 “I would tell any woman coming up, ‘Listen, it’s not going to be easy. A lot is expected of us our here in the field. We have to put out twice as much. We have to be twice as smart. But if you have the drive, and this is what you want, then keep charging forward. You can accomplish it!’” she said.

Pendleton is excited to take on this new responsibility and demonstrate her leadership capability.

“I’m looking forward to learning so much in this role, because it’s not a simple role,” she said. “I’m here to do a job, and I am going to do it to the best of my ability. I want to stay safe. I want to keep my crew safe so that we all go home. I have to stand up, and I have to take this on. And I will.”