For over a decade, as a union attorney, a union representative, and Vice Mayor of the City of Alameda, Malia Vella has fought for prevailing wage, Project Labor Agreements, good health care, safe working conditions, and quality career pathways.

Vella has directly helped the IBEW 1245 members working at Alameda Municipal Power (AMP) by rallying votes on the Alameda City Council to approve our MOUs. We can always count of her to have our backs in discussions with the City Manager and AMP General Manager.

Malia Vella is a champion for IBEW 1245 and the working class, so when she decided to run in the special election to fill a vacant Assembly seat in the East Bay, IBEW 1245 backed her candidacy fully, and dispatched a team of four organizing stewards to help get out the vote for Vella.

The 1245 team — Danielle Bonds, Foster Goree, David Ly and Aileen Zuehlke — spent three weeks on the campaign, making tens of thousands of calls, knocking on hundreds of doors, and doing all they could to drum up support for Vella. They even had the opportunity to meet Vella personally when they joined up with her team for a get-out-the-vote (GOTV) action. 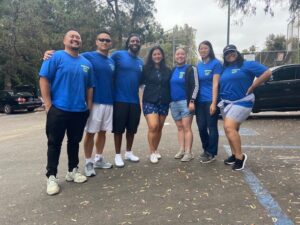 Malia Vella (center) with the IBEW 1245 team (plus volunteers)

Despite their hard work, Vella unfortunately failed to garner enough votes to advance to the run-off election, coming in third place out of eight candidates on the ballot. Although the team was disappointed, they still found the experience to be exciting, enriching and empowering.

“Thank you IBEW 1245 for giving me the opportunity to help with Malia Vella campaign. My two leaders, [1245 staffers] Hunter and Rene, gave me the tools to succeed and I just ran with it,” Lead Organizing Steward Danielle Bonds reported. “My team was amazing! Wow! Foster, Aileen, and David were so passionate, and we worked so hard to interact door-to-door.”

“The people of Oakland were so welcoming, and it allowed us to enjoy getting out every day for door knocking,” she added. “Since we have all been locked away in our homes, it was so refreshing to see so many people excited to see our faces.”

“My highlight was meeting Malia at one of our Saturday precinct walks and hearing how motivated she is to see the community she grew up in thrive,” said Organizing Steward Aileen Zuehlke. “She is such an inspiration, and just overall amazing. It was great seeing so many of her supporters come out and walk for her. I’m obviously bummed she didn’t make the top two, but I know she will continue to do great things for the Oakland area.”