It was a seemingly typical work day for IBEW 1245 member Nick Dellaragione, who works as a Meter Reader for the City of Redding. Temperatures were soaring, and he was on his route, taking a break in the shade, when he noticed that there was smoke coming from somewhere nearby. He immediately started looking for the source.

“The fire seemed like it was right next to me. I found it, two houses down. It was in someone’s backyard,” he recalled.

Dellaragione had already been to that house to read the meter. The fire had started near the pool, and there was dry vegetation around that had ignited. When he was reading, he saw the homeowner leave the house, but he could not be sure there were no other people inside.

He quickly made a plan to address the danger that was unfolding. First, he called the fire department and gave them the address. After that, he turned on his truck’s flashing lights to alert the emergency responders to the location. Then, he grabbed the fire extinguisher in his truck, and ran around to the backyard where the smoke was emanating from. 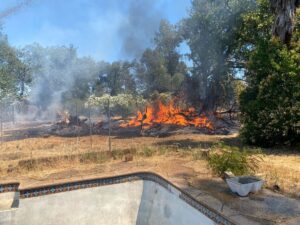 The blaze was already too big to be contained by the fire extinguisher, but Dellaragione did what he could. The fire continued to grow, and it quickly spread to a fence. But that was not the biggest concern: the fire was nearing an outbuilding, and if that were to catch fire, so would the house.

“I got the hose out, and started spraying down the outbuilding,” Dellaragione recalled. The fire was spreading the other way; there was nothing I could do about that, but I knew I needed to keep it away from the structures.” 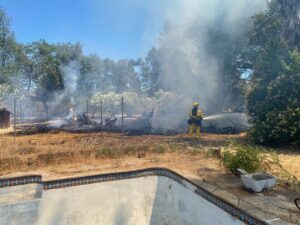 The fire department arrived in about ten minutes. Dellaragione assisted as they assessed the scene and let them take it from there.

Reflecting on that day, Dellaragione knew that his past experience facing fires was a factor in his quick reaction.

“I grew up in a fire prone area. There would be fires that would come right up to the house probably once every four years,” he said. “We would have to fight fires or run.”

He also noted how fortuitous it had been that his boss had ordered fire training the previous month. That meant he had recently practiced putting out a fire and the correct way to operate a fire extinguisher. 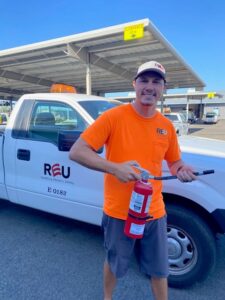 Dellaragione believes that the skills he’s acquired through his day-to-day work have improved his ability to identify problems and respond quickly.

“As meter readers, we are covering large sections of the city at once,” he explained. “We are the eyes and ears of the neighborhood, and are constantly looking for hazards. We report all types of things, from downed wires to mains breaking, to the smell of gas and storm drain dumping. I think we are an asset to the community.”

Later, the firefighters on the scene pointed out that the outbuilding may have had chlorine in it, which could have sparked an explosion. Houses in the neighborhood are close together, so if the fire had progressed, lives may have been at risk.

Dellaragione knows all too well the devastation that can come when a fire is left to spread. In 2018, the Carr fire came nearby and burned hundreds of thousands of acres, and destroyed the houses in its path. This year, there is already smoke in the air from the Salt Fire. The area is dry and hot, ripe conditions for fire to catch and spread.

“It never occurred to me to drive away and say, ‘This is not my job.’ It was my duty as a city worker and a citizen of this town,” he said. “I did put myself in danger a little bit. But something told me to stay and do it. Any one of my coworkers would have done the same thing.”

IBEW 1245 members have the training and experience to keep their communities safe, and are always at the ready to go above and beyond the call of duty to protect the places where they live and work.

As Dellaragione said, “I am proud to be part of IBEW. Proud union.”