The city of Gridley, CA is a small town of around 7,000 residents, and the 22 IBEW 1245-represented electric utility workers, maintenance workers and clerical personnel are proud to keep the city running. Living and working in a small town comes with a special duty of staying responsive to your neighbors and keeping your community safe, and IBEW 1245 Gridley workers rise to the occasion.

Back in the 1970s, Gridley city employees organized with IBEW 1245 at a time when the union was expanding quickly into the public sector. During subsequent contract negotiations, the city and the union reached an impasse, and the workers made the bold decision to assert their union rights, and they walked off the job. In response, the city revoked its recognition of the union, and fired the 18 striking workers, citing authority from a resolution the city had previously adopted. IBEW 1245 sued the city, and the legal battle worked its way through the courts. 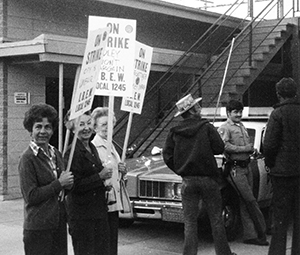 Ultimately, the workers were re-hired, and the case made it all the way to the California Supreme Court, which determined that the City’s decision to withdraw recognition from the union as a strike sanction was against the law because it violated the Meyers-Milias-Brown Act. This case from 1983 is a benchmark in California Labor history, setting an important precedent for protecting workers’ right to strike.

These days, things are a lot less contentious at Gridley, but the workers continue to play a critical role in the upkeep and operations of the idyllic community. 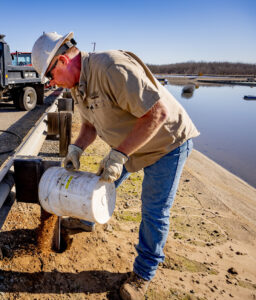 IBEW 1245 workers like Roger Blancett are proud to keep Gridley running, which includes both routine maintenance and modernizing local infrastructure. Blancett has been a Senior Maintenance worker for the city for 19 years. Recently, he was on the job at Gridley’s sewer treatment plant to replace a 40-year old guardrail with galvanized I-beams.

As he explained, “A guardrail keeps anybody from accidentally driving into the polishing pond at the sewer treatment plant. With the guardrail falling apart, it’s not safe. This is the same setup that Caltrans uses on the highways, and will extend the life longer than I’ll be here.”

For Blancett, comradery is an important part of getting the job done right. 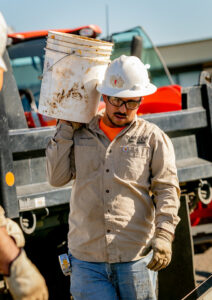 “It’s a good group of people I work with. We take care of each other. We’re a small group, but we’re multi-talented to where any project that comes along, we tackle it, from sewer treatment plant, roads, trees, paving, taking care of lawns, general maintenance,” he said.

Caring for the Community

Ryan Carlson is a foreman for the City of Gridley in the Electric Department who hails from Gridley and loves the diversity of experience that comes with working in a small town. 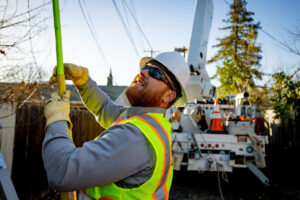 “I started out here with an apprentice job at the Electric Department. I’ve been here for six years, and it’s really a great place to work,” said Carlson. “We get to do not just line work. We do sub-station, and we do our own tree trimming. We do concrete work. We get to do all different aspects of the trade, instead of just being focused on one particular thing.” 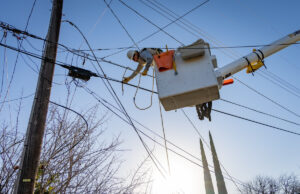 Carlson also reflected on some of the unique aspects of servicing a small town: “Sometimes, we cater to the customers more — being that we’re so small — we got to go on to get along.” Recently, that meant moving a planned outage to accommodate those wanting to watch the inauguration on television.

For Gridley workers like Carlson, being part of a small community enables him to be there for the important things in life: “I get to spend a lot of time with my family; I still get to go to all of my kids’ events,” he said.

Blancett knows from firsthand experience that not all unions are alike when it comes to safety and training, or negotiating and maintaining strong benefits. As a member of IBEW 1245, he has seen the difference having a well-established union can make. “They’re like the silent partner; when you need them, they’re there for you.”

Carlson agreed that a strong union is a way to win important rights and benefits, including better pay. “When the last contract came up, it had been a while since we’d seen a raise around here,” he explained. “Our union rep really fought for us to get what we deserved, and he ended up getting us a really good contract. He really came through for us.”

“I’ve been around the union for quite a few years, and the union has always got your back on things,” Blancett said.

*At the City of Gridley, masks are only required in City Hall and are optional in the field. Our members are encouraged to maintain their distance whenever possible when they’re on the job, and abide by other COVID safety measures that are in place.