When the Marathon Refinery in Martinez closed down due to COVID in the summer of 2020, Renauld Starks was among the hundreds of displaced employees who found themselves suddenly jobless in the middle of a pandemic.

Starks had been longing to build a career at PG&E for quite some time. The aspiring lineman had applied to dozens of jobs at the utility company, even before the refinery shut down, just hoping to get a foot in the door. After he was laid off from Marathon, he doubled down on his efforts.

“I probably put in over 60-something applications over the years … this past year alone, I put in at least 30. I know how competitive it is to get into PG&E,” Starks told the Utility Reporter. 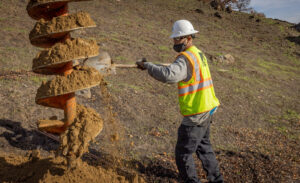 Starks has climbing experience, 15 years as a dedicated worker at his previous employer, and many other attributes that make him an appealing candidate for the job. But he was up against dozens of other applicants, many of whom had one thing that Starks did not – a certificate of completion from a line school.

For over a decade, PG&E has strongly favored applicants with line school on their resumes. But line school is a significant investment – it costs about $18,000, and this price tag can be a huge barrier to entry, especially for individuals from disadvantaged and marginalized communities. The unintended result of this hiring practice is a noticeable reduction in diversity on PG&E’s line crews – there are far fewer people of color in the field on the electric side now than there were just ten years ago.

Considering the fact that PG&E touts its commitment to diversity and inclusion, this practice seemed counterintuitive – and IBEW 1245 Business Manager Bob Dean (who was a senior assistant business manager at the time) decided to take the initiative and do something about it. He approached PG&E Interim President Michael Lewis in 2020 and brought the issue to his attention.

While some other execs might have been taken aback, Lewis was very receptive to the facts presented. But then discussions stalled, so another Local 1245 staffer, Bob Gerstle, circled back around with the company, and worked to develop a labor-management partnership that would address this issue. Thanks to many years of relationship-building with the company, Local 1245 was given an unprecedented opportunity to help the company identify and recruit a more diverse array of applicants, with a focus on placing as many hands as possible into under-staffed Bay Area yards.

The union proceeded to put out flyers, place ads, and reach out to community groups to find potential candidates. Local 1245 staffers identified, interviewed and vetted dozens of potential candidates, all of whom were required to successfully complete PG&E’s pre-employment testing to be considered. Local 1245 brought the company a list of 40 qualified and eager applicants, and as of this writing, 11 of them are currently working on PG&E property through the hiring hall, with the intention of eventually making them into full-time employees. 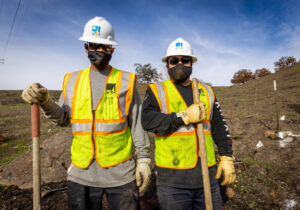 Renauld Starks, left, and Alejandro Tovar-Castillo worked at the Marathon Refinery together before hiring on at PG&E.

Starks is one of those successful candidates. Thanks to IBEW 1245, he hired on as a utility worker in the Vacaville yard, along with one of his old co-workers from Marathon, Alex Tovar-Castillo. Starks hopes to advance into apprenticeship and eventually become a journeyman.

“I was looking for something that’s demanding, and something that I can retire from — which I thought I was doing [at the refinery] – but in an industry where I won’t have to go through what I just went through, being a displaced worker,” he told the Utility Reporter.

When Malik Floyd-Stinson’s mom told him about a flyer she had seen from IBEW 1245, advertising opportunities in the utility industry with no prior experience required, Floyd-Stinson jumped at the chance. At the time, he was working in a restaurant, but knew that food service wasn’t the right long-term career path for him, and he hoped to find a more rewarding and fulfilling career at PG&E. 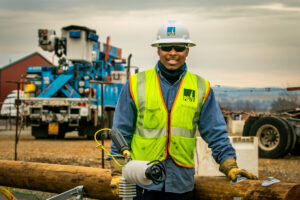 “I put in my application, and then the union called me up, I had the interview, and they told me what is required from the job. They told me that they would support me as long as I’m willing to do the job and put in the work for it,” Floyd-Stinson told the Utility Reporter as he recounted how he landed the opportunity. “I’m very grateful that [the IBEW] really stepped up to give me this opportunity. The fact that they chose me and gave my name in … it really is a wonderful thing.”

When the Utility Reporter checked in with Floyd-Stinson, he had been working as utility worker on a PG&E line crew for about a month. The Bay Area native had recently relocated to Roseville, and Local 1245 helped to get him placed in the Auburn yard, close to his new home. Despite being brand new to utility work, Floyd-Stinson reports that the job is going well so far, and his crew is helping him learn the ropes.

“They know that you start from somewhere, and everybody’s been good at teaching me everything,” he said.

For Starks and Floyd-Stinson, high-quality union representation is one of the best parts of working at PG&E.

“The union seems pretty helpful, like they care. They’ve checked on us at least two or three times, and I’ve only been here four weeks,” said Starks. “They’re there for us. If we have any questions, they get back to us in a timely manner. And they call just to check on us, to see how everything’s going.” 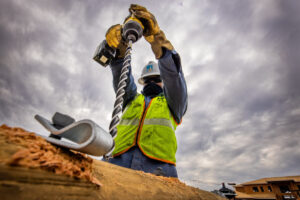 “A lot of people have been telling me all the good things about the union,” said Floyd-Stinson, who counts job security as one of the best perks of having a union job. “Everyone’s been saying that the union’s going to be there for you, and they’ve got your back.”

Starks and Floyd-Stinson were among the first group of employees to be hired under this new program, and if these new hires work out – and by all measures of success, it appears that they are – the union hopes to continue identifying and recruiting more people of color to join the ranks at PG&E.

IBEW 1245 would like to recognize the individuals who made this program possible, including Local 1245’s Bob Gerstle, Anthony Brown and Bob Dean, who served as the diversity hiring committee, as well as PG&E President Michael Lewis and Vice Presidents Ken Wells and Mark Quinlan, who provided support.