We entered the 2020 election season in the middle of a pandemic, during the worst fire season in California history, with the economy in free-fall and our nation more polarized than it’s ever been. In this pivotal time, we need elected officials in all levels of government who are prepared to lead us out of this crisis by standing up for workers, our livelihoods, and our health and safety.  But with the chips stacked against us, IBEW Local 1245 — and unions across the country — faced a monumental challenge. How could we win for workers this election cycle, given the numerous hurdles we were facing?

Since the dawn of the American Labor Movement, unions have built power by connecting with fellow workers directly, in person — and the way we’ve historically gotten labor-friendly lawmakers into office is through large-scale “Get Out the Vote” (GOTV) programs that traditionally rely heavily on face-to-face communication with voters. But what would GOTV look like in the era of COVID-19?

With so many questions and so few answers, the only thing that we knew for certain was that this would be an incredibly tough election cycle, and we would need every tool, every tactic, and every set of hands at our disposal. IBEW Local 1245’s organizing stewards heeded the call, and more than 100 organizing stewards took on a host of responsibilities on dozens of different campaigns, teaming up with 1245 Business Reps, labor federations and central labor councils to maximize voter outreach using both traditional and new approaches.

“Every one of the labor councils and every one of the State Labor Federation leaders we worked with cannot say enough good things about the work that our organizing stewards have done,” IBEW 1245 Staff Organizer Fred Ross said on Election Night. “They’re always there early, they stay late, they’ve got the animo, the energy. Other organizations are just blown away. The reputation that 1245 has is hard to earn, but our members have earned it!” 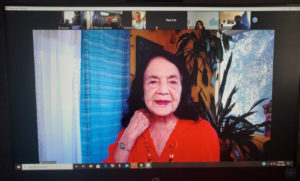 Dolores Huerta joined the lead organizing stewards on a Zoom call in October.

“I commend IBEW 1245 for organizing, for doing this work… Democracy is a sacred thing. It’s a team sport, and if we don’t show up, the other side wins,” Huerta told 1245’s lead organizing stewards on a Zoom call in late October. “As Abraham Lincoln said, ‘The ballot is stronger and more forceful than the bullet.’ Thank you for what you’re doing.”

“I’m incredibly proud of what Local 1245 has accomplished this election cycle. We may not have won every race, but we’ve made big strides that will pay off in the long run, both for our members, and for working people across the nation,” said IBEW 1245 Senior Assistant Business Manager Bob Dean. “Our fight doesn’t end today, and it’s not going to end tomorrow – because our struggle for justice never ends. We can and must continue to hold our elected officials accountable, and ensure that they follow through and do the right thing for the working class.”

GOTV By the Numbers

IBEW 1245’s GOTV program is largely focused on races that have a direct impact on our members working in the public sector. This year, we concentrated our efforts on the races for Modesto Irrigation District Board, Sacramento Regional Transit, SMUD Board, and City Council in Lodi, Lompoc and Alameda – all municipalities where hundreds of IBEW 1245 members work.

With so much change coming to the energy and utility sectors, we need all the allies we can get in Sacramento and Carson City to protect our jobs – which is why Local 1245 also supported a few key candidates, including Democrats and Republicans, for State Legislature in both California and Nevada.

Ballot are still being counted in some of races, and as results come in, they are being posted here.

IBEW 1245 Organizing Stewards and union staffers describe their 2020 campaign experiences in their own words: 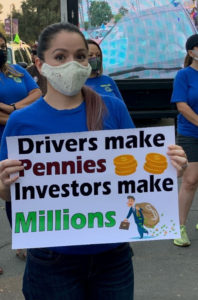 We are so incredibly grateful for the opportunity that 1245 has given us to be able to be released out to work with the California Labor Federation … We trained over 2,000 members on the importance of Proposition 22 and later on Proposition 15. I think 1245 had organizers in every single weekly campaign school that we had, and every day we received kudos, every day we received praise. And awe. “How are you guys doing it? How is it that I just asked you to do this one task, and you did it so quickly?” Or “How is it that you can take on three things at one time?” But for us, it’s fine. It’s no big deal. We do it all the time. It’s what we do. – Lead Organizing Steward Melissa Echeverria, who worked with the California Labor Federation

Being new to staff, I never had the opportunity [to work on campaigns] before. It was all pretty new. I worked on Prop 22, Prop 15, and a lot of local races through the Fresno outlying areas. I did lit drops in Fresno, Fowler, Madera, Sanger, Selma … I partnered up with [IBEW Business Rep] Rich Ingle and we took some neighborhoods and did some lit drops. I was kind of hustling, and I ended up going to pick him up … he had a huge blister. He thought I would be a good idea to do door-to-door in cowboy boots. Hopefully he won’t make that mistake again. – Business Rep Ryan Skelton, who worked with the Fresno-Madera-Tulare-Kings Central Labor Council

Having the Business Reps out there with us, side by side, walking the walk, making the calls, it really shows all the members that where we’re all in this together, as brothers and sisters, fighting for what is best for our Union and local. – Lead Organizing Steward Brittney Santana, who worked on campaigns in Clark County, Nevada and also supported the Jackie Fielder for State Senate campaign

There’s always that one phone call with a voter that sticks with you. For me, that one call was a young line clearance trimmer in Wisconsin, who told me wasn’t planning to vote in this election. I asked him, “Do you have any friends in California?” and he said, “Oh yeah, I heard you doubled our wages over there! I have friends who’ve gone over there because it’s so much better!” And I explained how we got that raise through legislation, and I told him, “That’s why politics matters! And that’s why you have to vote.” So he’s going to vote! It tickles your heart when you see the work, and how it spreads all across the land. It’s been tough, but it’s been fun! – Staff Organizer Eileen Purcell, who made calls for multiple campaigns

[While phone banking], I had one of the most interesting conversations with a brother in Maine. I did my little spiel and confirmed he was voting for the Labor-endorsed candidates, and then he said “Well, by the way, who are you with?” and I said, “Local 1245, Electrical Workers”. He was so knowledgeable about us! The impact we have throughout the United States is incredible. I would have never guessed that a little old man in Maine would know who IBEW 1245 was in the West Coast. I was just mesmerized … It was just incredible. It brought tears to my eyes. It was just so warming. I don’t know how to describe it. It was a good conversation. – Organizing Steward Veronica Rivera, who worked with the Maine AFL-CIO as well as the NV AFL-CIO

When I first started working with the Five Counties Labor Council, and also the Humboldt and North State Labor Councils, I was struggling with getting volunteers. But our organizing steward program really trains us a lot and prepares us for these kinds of challenges. [On the day before the election], we had 13 volunteers that were hauling from around 9am until the end of the day. And on Election Day, just in Five Counties alone, we had over 20 volunteers! – Lead Organizing Steward Alvin Dayoan, who worked with the labor councils in the northern part of the state, as well as with the California Labor Federation 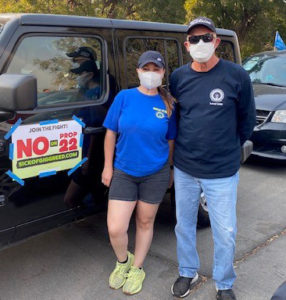 This was my first time as an organizing lead. It’s a lot of work! I didn’t realize how much work it would be, I just thought “Well, I’m going to show up. I’m going to do X, Y, and Z. And I’m good to go,” but it’s much more than that. The work that you do — and everything that you see come from it — is so rewarding! And being around the women that I was with on my team, they totally flipped my spirits in the right direction. They were very uplifting! – Lead Organizing Steward Charlene Peele, who worked with the Fresno-Madera-Tulare-Kings Central Labor Council

I worked on the Jordan Cunningham for California Assembly campaign. As you may know, Cunningham is a Republican who has been very helpful and supportive of 1245 in the State Legislature on a number of issues, especially issues related to Diablo Canyon, which is located in his district. This was my first time ever working on a political campaign, and overall it’s been a great experience. Even though I’m a Democrat, I’m proud to support Cunningham because I know that he supports our union, although I did feel a little awkward when I went to pick up lawn signs from the Republican Party HQ. Cunningham has informed us of his great appreciation for everything that we’ve done for the campaign. – Business Rep Jerry Camacho, who worked with the Cunningham for Assembly campaign 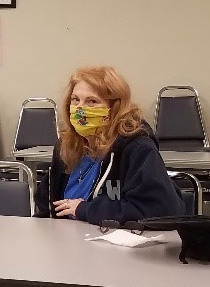 Nevada has some very close State Senate and Assembly district races, and we have learned from previous elections how important it is to have state legislators that support and protect working families in our State House.  But unlike previous elections, we weren’t able to have the in-person camaraderie we’ve had in the past. No large rallies or daily canvassing with precinct walkers going out … But we did have a drive-thru pick up (at arm’s length) for our contactless literature drops, and we had a number of union members making phone calls and sending texts from California and Nevada. Through the Zoom calls and lit drops, I got a greater sense of the large number of brothers and sisters from different unions working on the campaign, and how united we were in the drive to elect our candidates. Everyone was very dedicated in giving their time, and now we can see the great results. I think the most memorable thing for me was the unity I felt we had, even though we were at a distance due to the coronavirus. – Retiree Organizing Steward Rita Weisshaar, who worked with the Nevada AFL-CIO and central labor councils