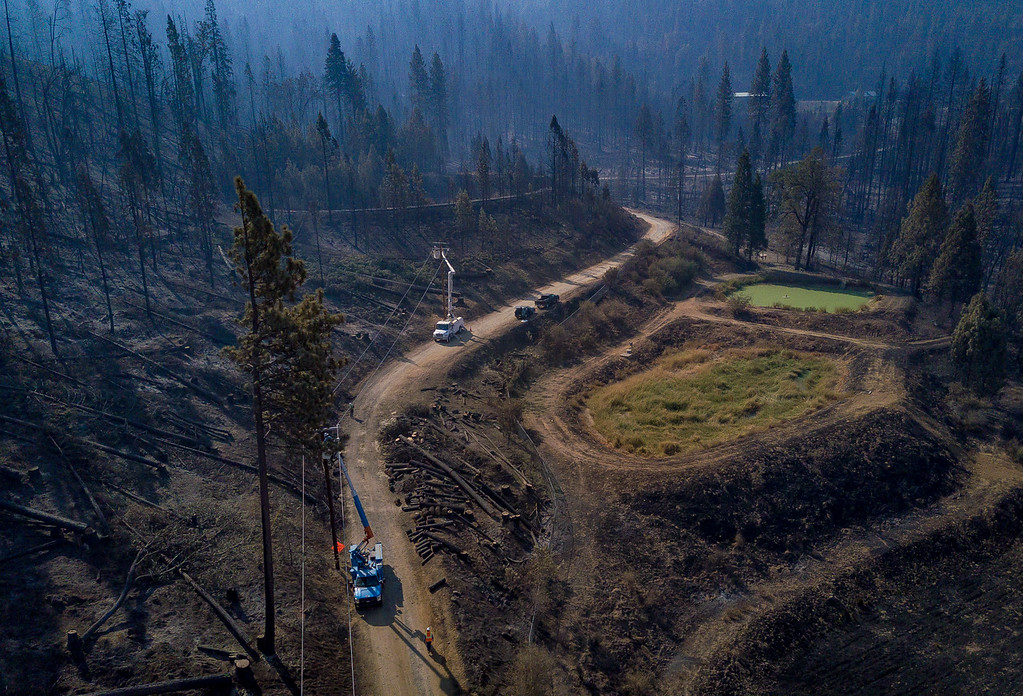 The area around Shaver Lake was hard-hit by the Creek Fire.

On Friday, Sept. 4, the Creek Fire broke out in Fresno county and has continued to blaze for more than six weeks. As of this writing on Oct. 19, the fire has burned more than 348,000 acres, and is just 60% contained. CalFire reports that the Creek Fire the largest single fire in California’s recorded history to date.

The area around Shaver Lake – a popular destination for local residents and tourists alike – was exceptionally hard-hit by the blaze. IBEW 1245 crews from PG&E were among the first on the scene in the Creek Fire zone. 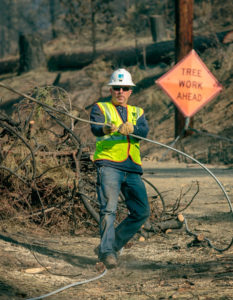 “We started out clearing hazards and fast checking poles and until the fire department let us in,” explained PG&E Electric Crew Foreman Dan Breckenridge, a 23-year member of IBEW 1245. “And then we started digging, setting, replacing and hardening.”

While most PG&E line crews have worked fires before, the degree of devastation in the Creek Fire zone still came as a bit of a shock. For Breckenridge’s older brother, Will, who also works as an ECF out of PG&E’s Dinuba yard, the strange pattern of destruction around Shaver Lake demonstrates the unpredictability of wildfires in general. 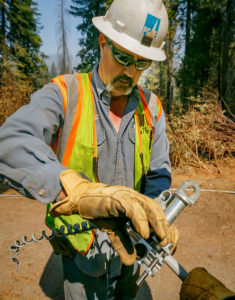 “It’s pretty crazy how some homes were burnt, and some were saved. The fire burned right up to a few of them and it didn’t bother them,” the elder Breckenridge told the Utility Reporter. “We saw one up here that had a vehicle in front of the garage sitting about 10 feet from the garage. Burnt the vehicle to the ground — but the garage was fine. It didn’t even affect it. There’s just no explanation.”

The Breckenridge brothers and their respective crews were hard at work when the Utility Reporter caught up with them in early autumn. After setting dozens of new poles, the line crews were working to string new single-phase tree wire, which PG&E has begun using as part of its grid-hardening endeavors. 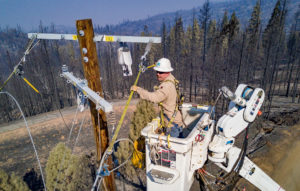 “This hardening is a whole new thing for us, as far as the work goes,” said the elder Breckenridge. “They’ve got new standards; the way we build things has changed a little bit, and the drawings are different. So it’s taken a little getting used to.”

As one of many groups on the ground in the fire zone, the PG&E crews had to coordinate with various other entities, from the telephone company to the line clearance tree trimmers (who are also members of IBEW 1245). 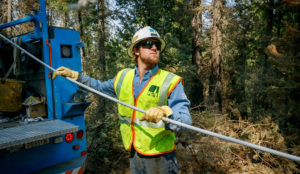 “One of the challenges we have is working around the tree trimmers, getting them in and out of here before the poles are put in and wire strung,” said the younger Breckenridge. “And we’re dealing with all the congestion on all these one-lane roads.”

Of course, the Local 1245 line crews took it all in stride, performing their important work safely and meticulously. While some workers might complain about the difficult terrain, long hours, and fluctuating air quality, those types of hurdles are simple par for the course for these crews. By and large, the members were grateful to be able to help, using their unique skills to make the area safe and bring the power back on for local residents and businesses.

“This career that I’ve had with this company and with this union has been something that I would not trade for anything. It’s been a great way to raise my family, and provides a super living,” said Will Breckenridge. “I enjoy working outside, and we get to do something a little bit different every day … So it’s right up my alley.”