In early September, IBEW 1245 members from the Sacramento Municipal Utility District (SMUD) and the Western Area Power Administration (WAPA) teamed up for a joint “Train-the-Trainer” program on transmission tower climbing and rescue techniques. While SMUD is a municipal utility, and WAPA is federal (part of the Department of Energy), both are represented by IBEW 1245, and the two groups occasionally come together to hold trainings, share best practices and exchange the latest information. 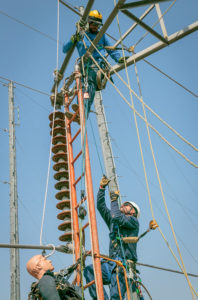 The two-day “Train-the Trainer” course, which took place at SMUD’s Sacramento Power Academy, involved one day of classroom instruction and one day of equipment inspection, climbing, and rescue.

As one of WAPA’s fall protection specialists, Elverta-based Lineman James Hill served as the lead trainer for the course. Hill, who is certified to train people in climbing on transmission structures, was tasked with certifying some of SMUD’s foremen, so that they, in turn, could then train their crews on these life-saving techniques. 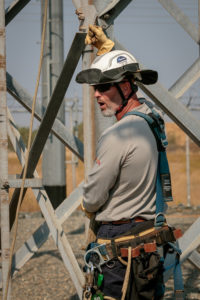 Hill believes that bringing SMUD and WAPA together for these types of trainings creates better, more predictable outcomes for all involved – both in the classroom and out in the field.

“The combined cooperation between the two utilities makes sure that everybody stays compliant with the OSHA standards on climbing and rescue,” he told the Utility Reporter.

The Occupational Safety and Health Administration (OSHA) requires tower workers to be recertified annually – and for good reason.

“If somebody gets hurt or injured on the tower or structure — whether it be a wood pole, aid structure, or lattice tower — we need to know all the different techniques of getting somebody down to the ground safely to start performing first aid or CPR,” explained SMUD Towel Patrolman Kyle Martin, one of the Train-the-Trainer attendees. 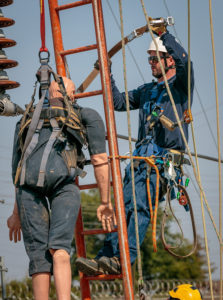 Fortunately, at the time of the training, the attendees had not needed to use the rescue techniques they were brushing up on. But they all understood the importance of being up-to-date on the latest safety guidance. For example, in 2015, OSHA made one big change to safety protocols for linemen and their crews: now, when climbing transmission towers, they must always be attached once they are more than four feet off the ground. While it is not always easy learning new ways of doing things, IBEW 1245 members understand the importance of safety on the job, first and foremost.

“The old-school method is out,” explained Steve Hintze, a line construction foreman at SMUD who attended the annual Train-the-Trainer. “Hopefully, younger generations come up knowing this and that’s all they know; it’s 100% belt-on and they will be a lot safer.”

“Whether it be a rule change through OSHA or what have you, WAPA follows all of that fairly closely … and SMUD follows what WAPA does,” added Martin.  “They’re experts in the transmission field, and they’re right next door to us… they’re a valuable resource, and that’s why we try and utilize them as much as possible.”

After the training, the attendees would be ready to train their crews. The Train-the-Trainer approach readies attendees to pass on their knowledge to others, so everyone gets trained efficiently and effectively. 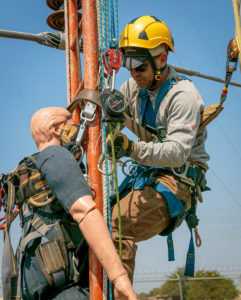 “Next week I’ll bring my guys in and do this same training with them, so that they’re trained,” said Hintze. “Every year, we’re training a new group of linemen and apprentices to qualify for climbing towers and rescue on a tower.”

In addition to ensuring an emphasis on safety, the members explained some of the other ways the union has made big difference in their careers and lives.

“We’ve had good contracts throughout the years, it’s been a good thing,” said Martin.

“It would be hard not to tell you something good about the union. It ensures that I get to come to work and earn a fair wage and living to support my family,” said Hill. “Without union representation, that’s not a guarantee.”