After nearly two decades as a firefighter with Cal Fire, Patrick O’Donoghue recently became an IBEW 1245 member, joining PG&E’s new Safety Infrastructure Protection Team (SIPT) as a crew lead. In a phone interview with the Utility Reporter, O’Donoghue shared a bit about his professional background, the work he does with SIPT, and his feelings about his new employer and his new union.

You had a long career before joining PG&E’s Safety Infrastructure Protection Team. Can you talk about that? 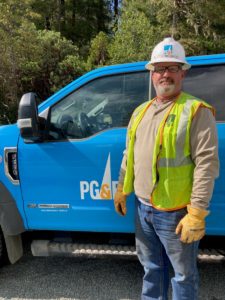 I always wanted to be a firefighter. It was my dream as a kid. I started young; I went to the Fire Academy in 1989. I was a volunteer firefighter in Kentfield – we used to ride on the back of fire engines. Back then, I had to have six jobs. So I also worked for the ambulance company, I was a bar back and a waiter, and then I fell into the microbrewery business … But my friends kept asking me, “When are you going to do what you really like?”  I had maintained my paramedic license the whole time, and so I got hired with Cal Fire in 2001. I worked up and down the state. I finished out as a captain in Hopland, in Mendocino.

California has seen really devastating fires in recent years. What was that like on the front lines?

In the last five years, it’s been absolutely crazy what I’ve seen. The longest stretch I was gone [working] was 70 days, that was in 2015. It became routine for us to be working 30 days on, and then four days off. I have two daughters, five and seven now, and I was missing so much of them growing up.

I was on the Carr Fire. When the fire inspector, Jeremy Stoke, got killed, we were a few blocks away. Embers were going sideways, and we were trying to save houses. It was 12 to 15 hours of being in the center of a tornado full of fire. And when we finally had to leave, our exit was 100% blocked because of downed power lines – every pole had burned.

It’s such a fantastic opportunity to work for PG&E. Right now, the Safety Infrastructure Protection Team is 40 engines in 32 locations. On a normal day, we support all lines of business. A standard portion of our work is fire staging, prevention and inspections. We create defensible space around facilities. I have gone to contract yards and educated all the personnel there about fire safety. I’ve also gone out with gas crews, when they are welding a pipe in 90 degrees and 15-mile-an-hour winds, up against a grassy hillside. We’ve made it more fire safe by wetting down certain areas, or removing the vegetation. We’re also often doing medical standby, since we are all at least an EMT or a paramedic.

What about when there’s a fire?

If there’s smoke in the air, our primary purpose is to go out and protect the infrastructure of PG&E. We go and treat poles with retardants, and it’s a no brainer. You don’t know [what type of essential service] is powered by this line, and it’s also for the firefighters. By treating the poles, it gives them a viable exit that isn’t blocked by power lines.

What do you want people to know about the work you’re doing?

[With the fires in recent years] we’ve seen so much decimation in the state, and it’s got to be incredibly expensive to have to re-build all this stuff after every fire. So I think that the work that we do during fires is extremely rewarding, because it has a direct impact on the people that I used to work with, and on my family, on our income, and what we pay in utility bills. Protecting this infrastructure can save millions of dollars.

What’s the hardest part about the job?

I’m used to working in a hot environment, 24 hours a day, for a month at a time … So I don’t really think this job is that hard. To be fair, we don’t do the work of linemen. That’s a very difficult job.  Now, the only difficult thing for me is feeling like a fish out of water. I’m working with professionals that are in the middle of their career, and they’ve got a whole lifetime of experience [in the utility industry].

As a new member of IBEW 1245, what’s your impression of the union so far?

The measure of any union is what it does for the members — and the IBEW is amazing. The SIPT Program would not be here if it were not for the IBEW. And when I look at what my wages, benefits, and working conditions were at Cal Fire compared to here, it’s obvious that the IBEW is a much stronger, maybe more unified, and dare I say, a better, union.