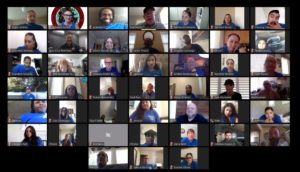 100 organizing stewards joined a special seminar with Robert Reich on Zoom in August.

As the former U.S. Secretary of Labor and one of the country’s most renowned political academics, Robert Reich is the kind of person who leaves a lasting impression on everyone who has the good fortune to cross his path. And on Wednesday, Aug.  12, 100 organizing stewards had the opportunity to get up close and personal (virtually) with Reich during a powerful and unique seminar, which was held on Zoom.

IBEW 1245 Business Manager Tom Dalzell expressed his own admiration for Reich as he introduced him at the start of the seminar.

“This is a little embarrassing to admit, but when I was in high school, I made a scrap book of my heroes. It started with Joan of Arc … and I had Henry David Thoreau, Walt Whitman, Leo Tolstoy, Emily Dickinson, Mahatma Gandhi, Joe Hill, John L. Lewis, Martin Luther King Jr, Cesar Chavez and Dolores Huerta in there,” Dalzell told the organizing stewards. “I think if I were still doing that, there would be a whole page for Robert Reich. He has navigated the natural alliance — and the distance — between academia, research and scholarship on the one hand, and labor and workers on the other hand. He’s articulated really bright ideas, and great defenses of Labor.”

Reich bashfully accepted Dalzell’s praise, and then immediately refocused the attention onto the organizing stewards themselves, acknowledging all of the dedication, time and energy they’ve put in over the past decade to build power for working people. 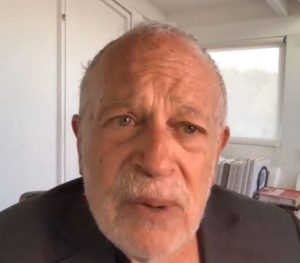 “I do appreciate what you’re doing at IBEW 1245, and I want to commend you for everything you’ve done. I want to encourage you with regard to everything you are doing and everything will do in the future,” said Reich, referring to the upcoming election. “Grassroots voter contact is absolutely essential. And the work you’re doing is absolutely critical to winning … It’s tough in a pandemic, when everybody’s wearing masks and observing social distancing. But nevertheless, there are ways of contacting people, and that ‘ground war’ is more powerful than anything else we know of in politics.”

Reich went on to discuss how the accumulation of money and power by a small handful of individuals has led to a hollowing out of the American middle class. He emphasized that this concentration of power, left unchecked, could be country’s downfall.

He emphasized that organized labor can and must be the countervailing power to restore fairness and justice to working people – and the best way to do that is by exercising our right to vote, and encouraging others to participate in the election as well. In his words:

After he delivered his remarks, Reich took the time to field a wide variety of questions from the organizing stewards on topics ranging from health care, to the postal service, to civil rights and social justice, and more. He gave candid, thoughtful responses to each question, and the organizing stewards who attended were clearly moved and motivated by the seminar.

“I have been following Brother Reich since he made the ‘Inequality for All’ documentary on Netflix in 2013. It’s always great to hear from people like him,” said Organizing Steward Brandon Fosselman.  “These types of trainings make us all more informed voters — and in my opinion, that is our biggest issue today.”

“The Robert Reich training was phenomenal. Mr. Reich has a way with captivating an audience,” added Organizing Steward Laquania “Q” Thompson. “He emphasized the importance of the upcoming election, and what is at stake.”

“I found Robert’s comments about the organizing stewards inspiring, along with his comments on personal contact in elections,” said Organizing Steward and retiree Ron Borst. “I heard him in person about seven years ago. He was impressive then, and he is impressive now.”

“I always love to hear Robert Reich speak, he is very knowledgeable and down to earth,” said Organizing Steward Mark Goodwin. “He has a way of motivating people which is impressive. I thought it was all very important and informative and we must take the knowledge and run with it.”

“It was good to listen to his perspective from being inside the Washington bubble, especially since he’s not a politician and he’s always put workers and the people first,” said Organizing Steward and retiree Greg Kestel. “He made a point that direct contact helps get the votes and can offset the money being thrown in elections – people to people, worker to worker. He also made a point not to let politicians off the hook after we help elect them, and to keep the pressure on!”

“It was such a great experience listening to Robert! He is so knowledgeable, and I appreciate all the Information he shared,” said Organizing Steward Rachelle Rendon. “I am grateful to have been a part of the training and to have heard such strong words!”

“I really enjoyed the training, it’s truly something special to listen to someone so involved in the political scene,” remarked Organizing Steward Alfredo Ramirez.

“I would love to have more interactions with Mr. Robert Reich, he’s seen a lot when it comes to politics,” said Organizing Steward Bridgette Thomas. “He has a lot of knowledge and insight to share!”

“Robert Reich is another labor pioneer that I highly look up to,” said Organizing Steward Alvin Dayoan “He is well known in the labor world and I aspire to be inspirational like him someday.”

“Mr. Reich is such an inspiration; he gave us encouragement and hope for our country and working America,” echoed Organizing Steward Georgette Carrillo.

“As Robert mentioned, ‘Niceness will get you far in politics, but it won’t get you all the way.’ We know we have a long road ahead, but we also know we have what it takes to get the job done!” said Organizing Steward Charlene Peele. “We may have obstacles and hurdles to overcome while covering the groundwork. However, if it’s one thing I am certain of, it’s that our brothers and sisters at IBEW 1245 are always fired up and ready to go!  We will continue to fight our endless journeys ahead.”