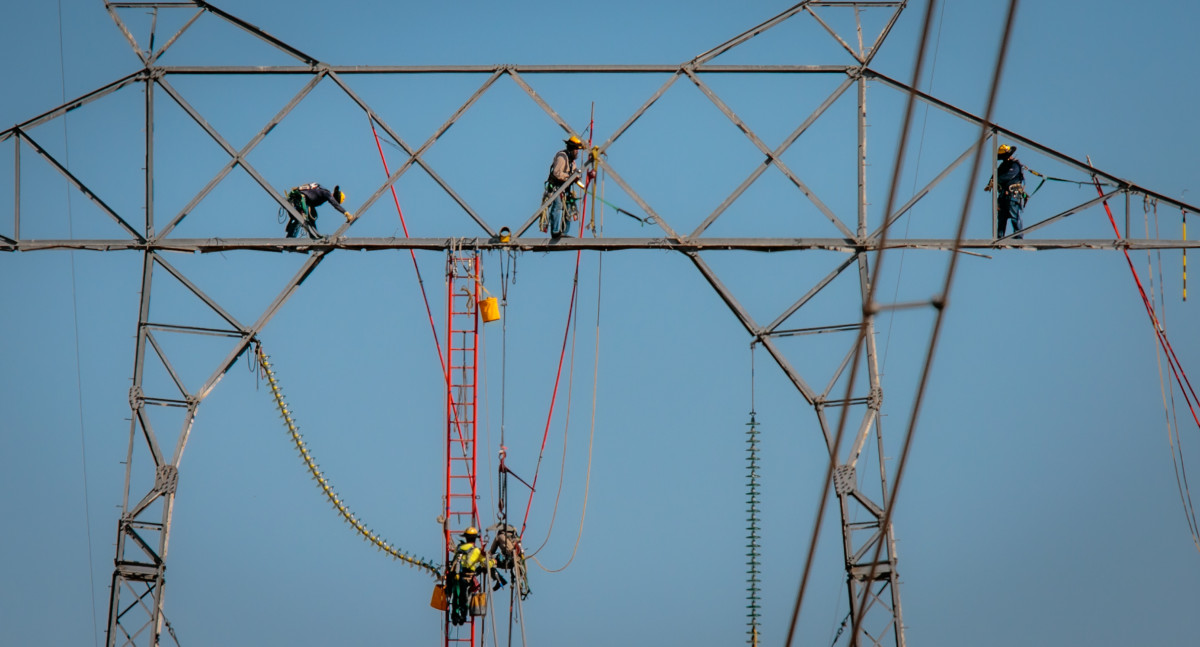 In early July, about two dozen IBEW members from PG&E began work on a large-scale tower re-insulation project, spanning from the Los Banos substation all the way to the Midway sub in Buttonwillow, about 120 miles away.

“This job contains three different clearances on three different 500 kV lines,” explained GC Subforeman Gene Brock. “The Los Banos-Gates #1, that’s the one we’re working on now. Then we turn around and do the Los Banos-Midway. Then we’ve got the Gates-Midway. It’s about 572 straight line towers and angles with five dead ends, and 14 tramp towers that we’re re-insulating and changing the hardware out.”

The job is no small task, and members are working 11 consecutive 12-hour shifts, followed by three days off, for about three months to complete the job.  The crew on the ground is getting assistance from three fly crews and three helicopters at 23 fly sites, as well as two cranes.

This was one of the first big jobs to move forward after the COVID-19 pandemic prompted PG&E to press pause on this type of work. With the virus still raging through many parts of the state and country, the members worked diligently to take extra precautions to keep their fellow crew members safe and healthy. They all had a face cover that they could pull on whenever they came within six feet of one another, and they endeavored to comply with the COVID mitigation measures to the best of their ability.

“Out here in the field, as you can tell, we pretty much social distance. We’re going to be thousands of feet apart on towers. And across the top of the tower, they’re quite a ways apart,” Landing Zone Lead Richard Barcellos pointed out. “We’ve got a good crew. They all look out for each other. They’re all able to perform their work and stay social distancing, to keep this whole thing in check.”

When the Utility Reporter visited the job site in July, temperatures were rising past triple digits, and fire season was looming. So the company also had two members from the Safety Infrastructure Protection Team (SIPT) on site to look out for the crew’s safety.

“Our primary responsibility on this job is fire and life safety standby,” SIPT Technician Freeman Wilfong told the Utility Reporter. “We are both trained to the EMT level, and we have EMT equipment.”

The presence of the SIPT techs seemed a quiet comfort to some, especially in the wake of the devastating helicopter accident that claimed three lives just a few months earlier. Between the choppers, the virus, the weather, the fire risk, and all of the heavy equipment, the members undoubtedly had their work cut out for them.

“There’s always special challenges when you do a job of this nature, because of the heat that we’re dealing with this time of the year, the type of work we’re doing, the amount of large, heavy hardware that you’re dealing with, and stuff like that,” said Barcellos. “It’s a physical and mental strain on every employee that’s out here being able to perform this work. But they have a great mindset, and they’re able to go forward, to get this job complete.”

The images and interviews featured in this story were gathered in accordance with COVID-19 guidelines.