America faces a crisis on three critical fronts: a public health pandemic, an economic free fall and long-standing structural racism. As organized labor, we must urgently address all three with precision and purpose. They cannot be fixed separately.

On June 17, 2020, the National AFL-CIO organized the “Workers First” nationwide day of action for racial and economic justice, and thousands of working people across the country came together at local events and car caravans from coast to coast. The goal of the day of action was to put pressure on the U.S. Senate to pass the HEROES Act, as well as raise awareness for what the AFL-CIO has identified as America’s Five Economic Essentials:

America’s Five Economic Essentials must be combined with substantial policing reforms and implemented in ways that recognize the disproportionate impact of COVID-19 on workers of color, for a comprehensive agenda that addresses all working people’s needs for safe jobs, economic security and freedom from systemic racism.

“We had 15 cars participate in the caravan, and the turn-out from Local 1245 was phenomenal, thanks to 1245 Business Representative Dominic McCurtain (with assistance from his wife Becky, daughter Elaina, and baby daughter Annica),” said Thomas. “In addition, 1245 members Chris Holdren and his daughter Alexia, Rob Baber, Chris Bryant, Anthony Green, Darrell McDaniel, Dave Williams, and 1245 retiree Stu Neblett all caravanned in support of working men and women!” 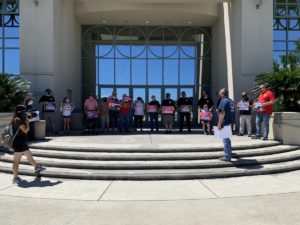 The caravan stopped off at Redding City Hall

Sporting their 1245 essential worker tee shirts and masks, the members decorated their cars with signs and proceeded to drive through town, stopping at Shasta Regional Medical Center, Redding City Hall, and the U.S. Post Office. At each stop, the participants hopped out of their cars for a brief rally. A local news station captured the event and broadcast it on the evening news. Watch the coverage here. 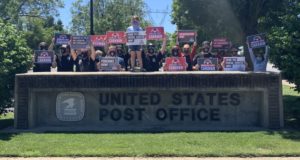 The caravan also stopped at the local Post Office

“Thank you Local 1245 for helping to make the caravan a success!” echoed Thomas.

Learn more about the nationwide action.