A Livermore GSR was dispatched to a next tag gas leak turned in by a PG&E Meter Tech at 6001 Sunol Blvd. in Pleasanton. When the GSR, Matt “Mr. Nice Guy” Davis, arrived, the notes directed him to building C near a loading dock on a campus with about three large buildings. After driving around, the GSR ran into a maintenance person for Thermo Fisher Scientific, the company that runs the campus (and is the customer on record). The maintenance person took him to the building in question — a large three-story lab.

The GSR got his CGI out and took some readings near an 8” customer-owned house line feeding this building where it came out of the ground. He was getting some gas reads out of the ground but nothing on the above ground portion. He took readings inside the building’s basement and followed the pipe to two 14,288,000 BTU boilers. After getting no reads inside and no others gas reads outside except at the point where the pipe comes out of the ground, he located the meter which is a large 102M with a 100 CFH test hand and delivery pressure of five PSIG approximately ¾ of a mile away. He checked the maps and found no PG&E owned gas lines near the odor. The gas service feed to the meter was the closest PG&E-owned gas line. Being that it was after 1700 hrs, he made a call to the on-call supervisor on his findings. They agreed not to shut the meter off and to go back with the best Lead GSR in the system (me!) the next day.

I met Matt Davis out there the next morning with the head maintenance person. We swept outside the building and found the same readings as the day before. We went into the building and did a sweep and got no gas readings inside. We discussed with the maintenance person how Thermo Fisher was going to repair their house line in a timely manner. The maintenance person said they need the gas to keep the lab at a constant temperature. I talked to my supervisor Johnny Weiman and we concluded that I would do two sweeps a week inside to make sure their house line leak doesn’t migrate into the building or get worse outside.

We conducted sweeps inside and out for two weeks – and then the shelter-in-place order for the Covid-19 was put in place. The next time I went, the maintenance person had me fill out and sign a form to confirm I did not have a temperature or had not visited China or Italy in the last fourteen days. I asked the maintenance person when they can get their gas line repaired, and he said they cannot shut down — especially now. I asked why, and he said that they are making the Coronavirus test kits inside this building and that the president of the United States in the press conference the day before just committed to ramping up the number of test kits that they produce. He said the contractor they hired is ready, but they just can’t shut down right now.

After leaving the Thermo Fisher campus, I started thinking on what PG&E could do to make sure the lab can still crank out the test kit quotas and get the leak on their house line fixed. Two weeks before we assisted a PG&E contractor who were replacing a main in Dublin. Field Services job was to get the three existing gas meters bypassed and onto CNG trailers while they cut the main over and then get them back onto the new main and services. I said to myself, can we somehow use the CNG/LNG department to keep Thermo Fisher on? I came up with a way to only shut them off for one to two hours to switch them over to the CNG trailers. Leave them on the trailers for as long as it takes to repair their gas line. I ran it by my supervisor, and he said “Let’s try it.”

It took a while for me to coordinate with Richard Pon and Matt Montez with the CNG department. I met Matt at the job site and by this time Thermo Fisher were now taking the temperatures of everybody that came on their campus. Matt said that it is very unusual that his department would help a customer with the customer’s own house line. Usually their department only uses the CNG trailers for shut-down work on the PG&E gas system. I told him about the Coronavirus test kits that they are making, and explained that’s why they cannot be shut down for a couple of days it would take to repair their house line. He said that it would have to go through PG&E legal department to write up a contract so we could proceed.

About a week later, we got approval and coordinated with CNG/LNG, GPOM, OM&C and Field Services from PG&E and the customer Thermo Fisher and their contractor, Preston Pipelines, to get this project underway. Field Services’ part was to have Livermore’s Service Mechanics Brian “Double B” Bluford and Chris “This is not my first rodeo” Allen to build the monitor regulation to supply enough gas for the boilers at the delivery pressure of five PSIG. Once we got the regulators and parts delivered, it took them a couple of days to build, test and set the pressure in the yard. Our part of the project was ready. 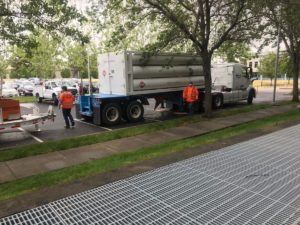 On the thirteenth of May, “Double B”, “Not my First Rodeo”, Dennis “Mr. Bunion” Finnegan and I showed up at 0830 Hrs and had to wait a couple of hours for the temperature to warm up in order to shut the building down. The boilers are used to heat the building to keep it at a constant temperature so they can perform their work in a strictly controlled environment. We started by having GPOM shut the meter off, and while it was going to be off, they did a full inspection on the meter and regulation. After it was off, the maintenance people blew the pressure off on relief stacks on the boilers. After that, we unbolted and removed a flanged spool and bolted our regulation onto the house line with the help of OM&C and switched it over to the CNG trailers. We installed support stands to take the weight off the piping with plywood under the stands. The contractor was to dig up the house line in the morning. I asked Matt from CNG if they were going to have a standby person overnight, and he said no, he had an app on his phone where he can monitor the CNG tanks. So, we taped off and barricaded the area and left. 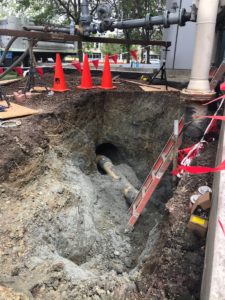 When I arrived the next morning, a Preston Pipelines crew was already working to dig up the pipe. It just so happened that the house line ran right under our bypass regulation that we installed the day before. As I walked up, the crew foreman said they had to move our stands and support it with a 4X4. Nothing was damaged and the gas was still flowing. The foreman told me that they were in the process of getting a pressure test fitting and gauge on the steel flanged riser to find the leak. They had exposed the steel riser and plastic transition and two six-inch couplings on the plastic. I told him to call me when they have fixed the leak and are ready to get it taken off the CNG tanks. Around 1600 Hrs, I got a call and was told they found a leak on the steel riser and are having the riser made and will be ready the next morning to switch it back to the house line. Matt Montez called me and said the same thing. And that we should be there at 0830 Hrs. 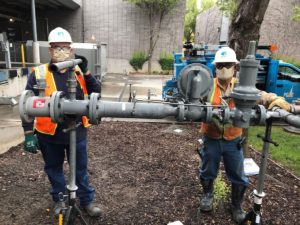 Double B, Not My First Rodeo, Mr. Bunion and myself showed up at 0830. We had a tailboard with all the different departments, Thermo Fisher and the contractor. I talked about the job and each person’s responsibility at each stage. We also discussed the hazards of the job. We then had CNG shut down the tanks and had the Thermo Fisher maintenance person to blow down the pressure through the stacks at the boiler. We disconnected the feed hoses to our temporary regulation and had the Preston Pipelines mini excavator support our regulation set up with slings. We then unbolted the regulation from the house line and carried it out of the way. Preston had already installed the new riser and connected the plastic to it. We then had GPOM turn the meter back on and safely purged at the flanged valve on the new riser. Preston then reinstalled the spool and bolted everything back up. We reset the eight-inch earthquake valve and had Thermo Fisher fire up the boilers. The only hiccup came when Preston was back-filling and tamping the dirt in place. They tripped the earthquake valve and the maintenance person came out and told us the gas was off. We reset the earthquake valve and taped it open until they were finished.

I want to thank all the different PG&E departments that participated in this project. We all worked well together. All to make sure that the American people can get the Covid-19 test when needed. We found out after talking to the Thermo Fisher people that they were ramping up to make 20,000,000 tests kits a month because of the demand, and they were also just tasked with making the Covid-19 antibody test.