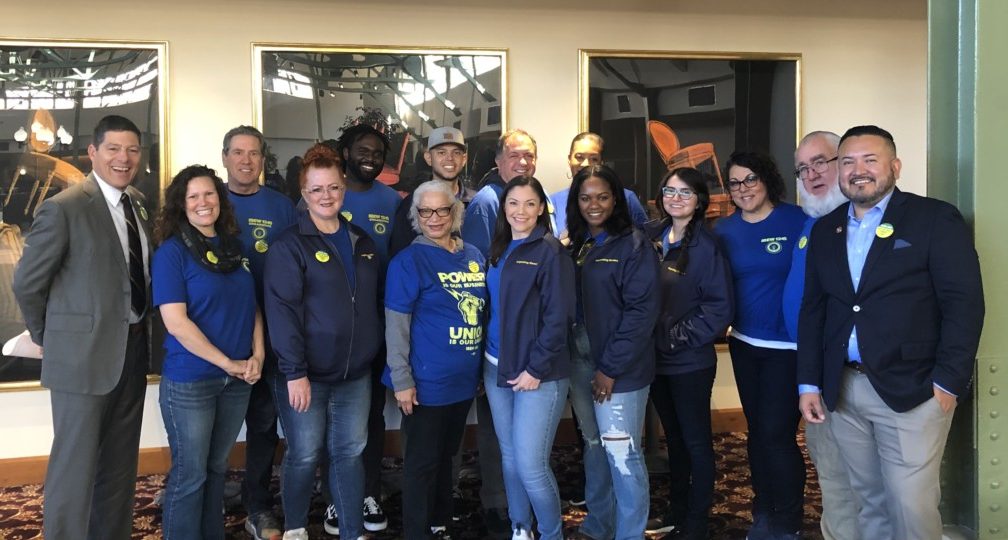 These IBEW 1245 organizing stewards and staffers participated in the State Association of Electrical Workers Lobby Day on Feb. 25.

On Feb. 25, a team of 13 IBEW 1245 organizing stewards, along with two staffers, joined the California State Association of Electrical Workers for its annual Lobby Day at the State Capitol in Sacramento. The union members-turned-lobbyists focused on three important and complex topics: 1) ensuring that the new green economy provides high-road union jobs, 2) IBEW’s opposition to proposals that would break up or municipalize PG&E, and 3) the impact of decarbonization on union members and their jobs.

After a briefing with IBEW 1245 Assistant Business Manager Hunter Stern, the organizing stewards split up into teams and proceeded to visit as many legislative offices as they could, explaining IBEW’s positions on several key legislative proposals, ranging from pump storage, to EV charging, to micro-grids and more. At each visit, the stewards urged the lawmakers to commit to standing with the union when these pieces of legislation come before them.

The results of these meetings were largely positive, and at the end of the day, the organizing stewards were able to identify which lawmakers were in support, which were opposed, and which were still on the fence. This information will prove vital when these bills come up for votes later in the year.

“While Organizing Stewards aren’t the only ‘amateur’ lobbyists careening through the chaotic, congested corridors of power at the Capitol, we are certainly the most unique,” remarked longtime Organizing Steward Kevin Krummes at the conclusion of the Lobby Day. “At the end of the day, I was left to ponder why the multiple colored t-shirts I saw — belonging to special interest groups, students, civic associations, and even other unions — were not as formidable or influential as 1245 Organizing Stewards are. I think the answer is quite simple. When you see the blue shirts of 1245 cruising the halls, we are not being led or guided by a leader to our next destination. We are small autonomous groups during the work ourselves. We are given information, then turned loose to unleash our knowledge!”

“This didn’t happen overnight; it’s taken years of hands-on experience that 1245 affords us,” Krummes added. “But we’re here now, and we’re not going away!”