IBEW 1245 leaders commemorated the legacy of longtime IBEW 1245 activist Jack Hill, who passed away in December of 2019 at the age of 88.

“Jack was a comedian, to say the least,” said former Executive Board member Mike Scafani, who served on the 2002-2003 benefits negotiating committee with Hill. “He always had a story to tell, and it was the highlight of our day. The committee members would look forward to going to a meeting with Jack, just to hear his stories.” 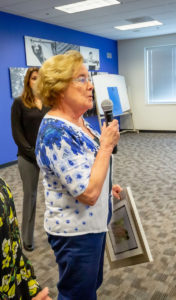 “His stories are what I remember most of all — his stories of being in the service, and his colorful language that always surprised me,” echoed 1245 President Cecelia De La Torre, who also served on the bargaining committee with Hill. “His favorite story he would tell was how he met his wife. He just loved telling that story.”

As a token of gratitude for all of the time and effort that Hill and his family gave to the Local, Business Manager Tom Dalzell presented his wife, Kathy, with a framed photo of her late husband.

“Jack dearly loved the local, almost to the detriment of our marriage,” she told the Advisory Council with a smile. “He truly believed in the cause, and willingly gave his time.”