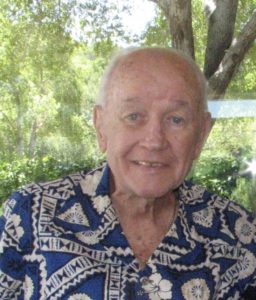 Jack B. Hill passed away peacefully on the morning of Dec. 25th, 2019, at the age of 88 in San Jose, CA. Jack was born in 1931 and raised in Clarkston, Washington, where he grew up with his beloved family. Jack entered the Navy during the Korean War and served for four years as an aviation ordinance man aboard the USS Princeton and USS Oriskany aircraft carriers. He moved to the Bay Area, where he worked for Pacific, Gas and Electric for 35 years. There he met his wife Kathy to whom he was married for 52 years.

Jack was initiated into IBEW Local 1245 in 1966. He was a dedicated trade unionist serving the union membership in various roles throughout his career. Just months after joining the local, Jack was serving a shop steward and soon after became the Clerical-at-Large representative on the Advisory Council, and in the mid-1970s served as a union business representative for two-and-a-half years.

He remained active with the union well into his retirement. Jack utilized the negotiating and organizing skills that he acquired over his career in the IBEW to gain improvements in retiree pensions and medical benefits.

After retiring from PG&E in 1987, he joined the South Bay Chapter of the Local 1245 Retirees Club. Jack made a point of visiting every chapter of the Retirees Club and coordinated a mail campaign to get PG&E retirees to contact the company about problems they were having making ends meet. After receiving thousands of postcards, PG&E agreed to increase pension payments for retirees.

In addition to his union activism, Hill also fought for the rights of senior citizens. He served on the board of directors of the Congress of California Seniors, and as a Vice President of California Alliance for Retired Americans, worked with the Council on Aging, and was a member of the SIRS 38.

In 2008, Jack was one of two pensioners selected to be a part of the Local 1245 Bargaining Committee. A key issue in those negotiations was the rising cost of medical care that was consuming an increasingly large share of pension checks.

An avid lover of the outdoors, Jack loved to tell tales of his pheasant hunting with his beloved bird dogs. Having raised two daughters and been a father figure to many, Jack looked after his grandchildren and a slew of neighborhood kids and friends who all looked up to him and felt his warmth and generosity.

Jack had lifelong friends and continually made new friends wherever he went. He was preceded in death by his mother Mildred, father Clarence, sisters Dorothy, Lora Jeane, and Doris, and brothers Meryl and Claude. He is survived by his wife Kathy, and daughters Kim, Jody, and Jill, 6 grandchildren and two great grandchildren. Memorial Service will be held Jan. 2, 2020 at 11:00 am at Oak Hill Funeral Home, Drawing Room Chapel, 300 Curtner Ave.  in San Jose. Jack will be buried with his family in Vineland Cemetery, Clarkston, WA.