Known as one of the country’s most popular and remarkable winter-travel destinations, the greater Tahoe-Truckee area attracts thousands of tourists from all over the world during this time of year. For Truckee’s visitors and residents alike, reliable access to electricity and water are often taken for granted – but in a town that averages more than 204 inches of snow per year, and at- or below-freezing temps 228 nights per year on average, keeping the faucets running and the heat on is no small feat. 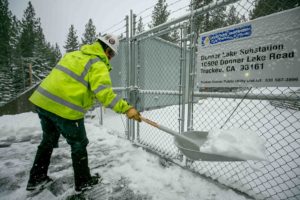 Fortunately, the hard-working IBEW 1245 members at Truckee Donner Public Utility District (TDPUD) are on the job, day and night, in sun and snow, to ensure access to critical utility service in this glittering, remote winter wonderland.

Whatever the weather, the show must go on

For the IBEW workers at TDPUD, extreme cold and snow plays a big role in the nature of their work during the winter (and year-round, as temps can drop down into the 30s on spring and summer nights as well). They’re almost always preparing for the next weather event and the potential impacts it might have on the equipment and service in the area. 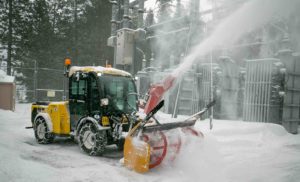 Ed Atkins is a journeyman lineman whose journey at TDPUD began almost 21 years ago. He’s part of the team that’s responsible for building and maintaining the electric infrastructure in the district – and as a utility first responder, he knows that he needs to be ready to jump into action in a moment’s notice.

“Our trucks are stocked up, fueled up, and chained up if need be, so if any trouble calls come in, we’re ready to roll,” he said. “When it snows, we are in the mountains clearing substations, making sure that we have access to the equipment so we can get to it in an emergency.”

Inside those substations, technicians are also hard at work to keep critical equipment up and running, performing upgrades as necessary. When the Utility Reporter caught up with Electrician and Meter Technician Foreman Shane Christian, he was working on a new SCADA system upgrade.

“We take care of all the controls in the substation, all the metering in a district, all of the motor controls, all the building maintenance with electrical. In the winter, we focus on the inside buildings and outside when necessary,” he explained. 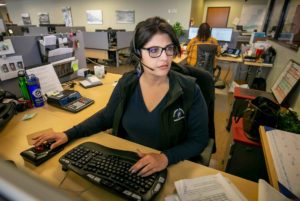 And when the power goes out, customer service reps like Anabel Sanchez serve as the first point of contact for customers – a job that is especially demanding during periods of extreme weather like drought and snow.

“It’s always different situations,” she said in describing how her job keeps her on her toes.

Responding to Changing Needs in the District 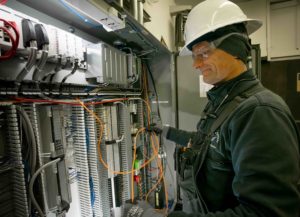 The Truckee-Donner area is seeing a lot of new development, and TDPUD workers are actively involved with overseeing the plans for commercial building boom and the impact new construction has on infrastructure.

“The developer comes with an idea, they submit it to our engineers, our engineers come up with a plan, and then I make sure the developer adheres to the engineer’s plans. I’m responsible for adherence to company policies and procedures,” explained TDPUD Substation Lineman and Inspector Shannon Hoyt. 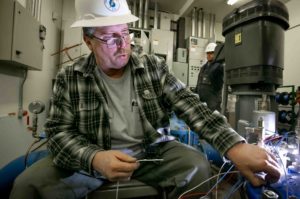 For Christian, being part of the union means being part of a brotherhood. He reflected on the training he received through the union and how important that is to keeping workers safe on the job, and how that experience has advanced his career.

“I’m very proud I took the course that I did. I wouldn’t be where I’m at [without the union apprenticeship],” he said. “[I value] the camaraderie that you get with the other guys that have been through the programs, whether it’s a linemen apprenticeship or an electrician apprenticeship.”

Hoyt, who has previously worked at non-union companies, can quantify the union-difference first-hand. 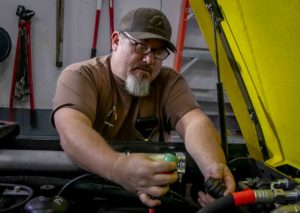 Chuck Gazso fixes a snow blower in the shop

“Coming into the union has been drastically different,” he said. “Having that sense of security for one, and I also have an honest working wage that I can support my family on – and I can actually help give back to my community, because I have the resources to do that.”

IBEW 1245 recently negotiated a new contract with TDPUD, and the workers spoke about the importance of collective bargaining, and having a strong, enforceable contract that includes quality wages and benefits.

As a parent to a young child, Sanchez expressed the confidence she has in doing her job knowing that the union has her back and understands her needs.

“We’re protected against unjustified things that could happen,” she explained. “I’m very happy with the outcome of the new contract.”

Atkins summed up what it means to be union strong: “It’s amazing the strength in numbers and knowing somebody’s got your back on things. And I think the collective bargaining is just an amazing thing.”