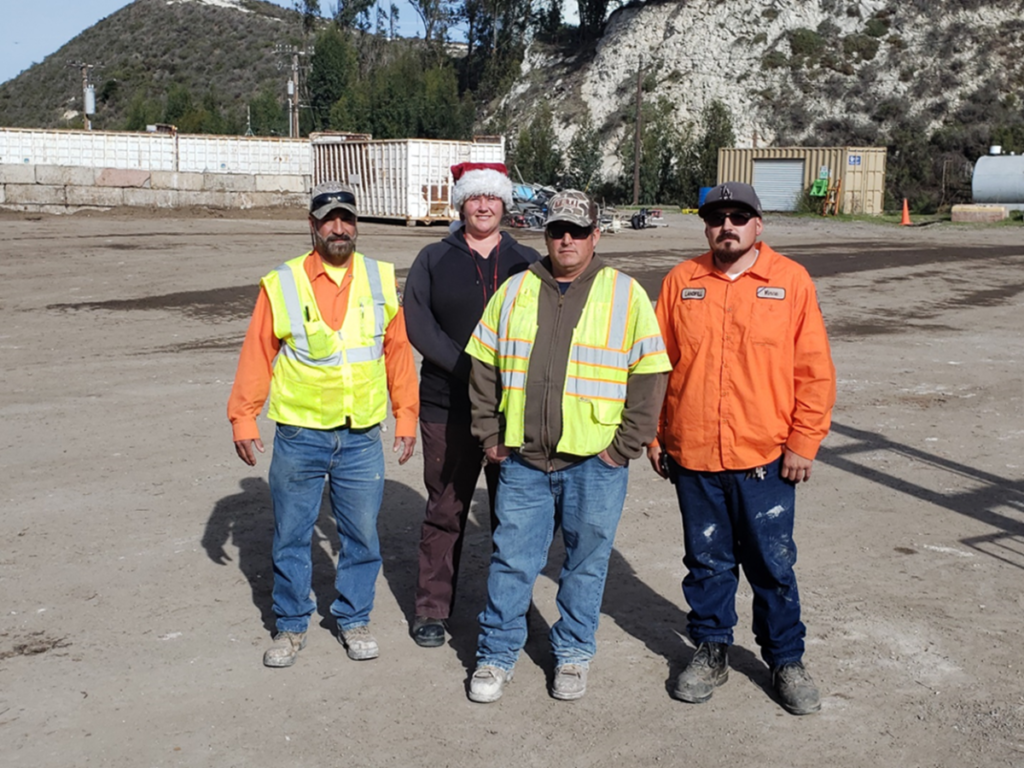 IBEW 1245 members (from left) Ben Segura, Chelsea Terrusa, Clint Porter and Vincent Reyes worked together to save a man’s life at the Lompoc Landfill. Photo by Jaime Tinoco

It was late in the afternoon on a Friday in December, and as he was wrapping up work for the day, City of Lompoc Landfill Coordinator and IBEW 1245 member Vincent Reyes noticed a patron’s truck, which was parked right near the scales in the drop-off area, had been idle for quite some time. He went over to the vehicle to see if the driver needed directions out of the landfill – and found him passed out over the steering wheel, apparently unconscious.

Reyes quickly called for help, and Lead Heavy Equipment Operator Clint Porter, who was nearby talking with another worker, came over to see what was the matter.

“I peered through passenger side window, and when I saw the way the guy’s head was slouched over, I knew it didn’t look right,” said Porter. “The driver’s side window was down, so I reached in and shook him to wake him up, and I asked him if he was ok – but he wasn’t coming around. When I checked, I couldn’t feel a pulse, and it looked like he wasn’t breathing.”

Within moments, another landfill coordinator and 1245 shop steward, Chelsea Terrusa, was on the phone calling 9-1-1, while Heavy Equipment Operator Amadeo (better known as Ben) Segura, who had heard the emergency call over the two-way radio, rushed down to help attend to the unconscious man in the truck. Segura also tried rousing the man as Porter had, but he remained unresponsive – and then something strange happened.

“He made a sound that I’d never heard before – I think they call it the ‘death breath’,” said Segura. “It sounded almost like snoring, and he suddenly sat straight up with his eyes and mouth wide open. I shook him again and asked again if he was ok, but still no response. So I put my hand up to his nose and mouth to try and feel him breathing – he wasn’t. Then I checked his wrist and his neck, and there was no pulse.”

At that point, the landfill workers realized this was a life-or-death situation — and for a split second, Porter went into shock.

“I remember looking at Ben and thinking, ‘What do we do?’ … It felt kind of surreal,” he recalled, noting that he’d never been in this sort of situation before. “But then I thought back to the CPR training we’d had – and in a second, that training kicked in, and we just did what we had to do.”

Porter reached into the man’s truck to try and unlock the door, but it wouldn’t open – and that’s when he realized the vehicle was still in gear, with the unconscious driver’s foot on the break. So Porter first shifted the truck into park, and then grabbed the keys from the ignition and used them to unlock the door.

Working together, Porter and Segura carefully moved the man out from the driver’s seat, with Porter hoisting the man by his shoulders and Segura grabbing his legs. They gently set him on the ground, and begin to administer CPR as instructed by the 9-1-1 dispatcher.

“When we first laid him down and I unzipped his sweater to do the chest compressions, I knew right away that he’d had open-heart surgery, because I felt the scar on his chest,” said Segura, who later learned that the victim had a pacemaker and had in fact gone into cardiac arrest behind the wheel that day. “I was really worried that he wasn’t going to make it. But he wasn’t stiff, and he was still warm … so I kept doing compressions until the EMTs got there.”

Like many other City employees, the IBEW 1245 members at the landfill are required to complete a mandatory CPR training every year – and that training allowed them to act quickly and effectively to assist the victim. Terrusa remained on the phone with the 9-1-1 dispatcher, and Segura performed chest compressions while Porter counted.

“After we got to 50, I wasn’t sure if we should be giving him rescue breaths – but the dispatcher said no, just keep on with the compressions, and so we kept going,” Porter recalled.

When the paramedics arrived about eight minutes later, the victim — identified by news media as James Williams, Jr., age 84 — was still completely unresponsive, but the EMTs promptly hooked him up to an AED and succeeded in re-starting his heart, while also using a hand-pump oxygen mask to force air into his lungs. He remained unconscious as they wheeled him off on the gurney, and was put on life support at the hospital – but in a couple days, he was taken off life support and started breathing on his own. He was subsequently transferred to a rehabilitation facility in Lompoc, where he appears to be recovering well.

“The paramedics told us that if we hadn’t been there doing CPR, he wouldn’t have made it,” said Segura. “It was definitely a group effort, everyone did their part that day. We all worked together; we just wanted to make sure he pulled through. People have said, ‘You’re a hero!” But I just did what I was trained to do.”

“After it was over and we went home, I was thinking about it all night,” said Porter as he described the extreme jolt of adrenaline he felt. “It was a pretty big rush, really intense.”

To express their appreciation, Williams’ wife and sister brought some turkeys and potatoes over to the landfill crew a few days later, as a way of saying thank you. In a phone call with Landfill Supervisor Gale Greer, Williams said that he looks forward to being well enough to go down to the landfill himself and show his gratitude to the workers who saved his life.