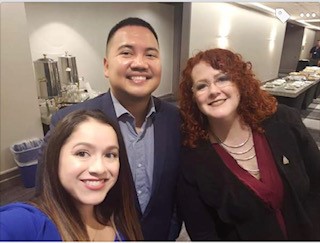 After the inspiring speakers, the IBEW attendees went down to Capitol Hill to speak directly with legislators and their staff on the issues that matter most to the union and its members. 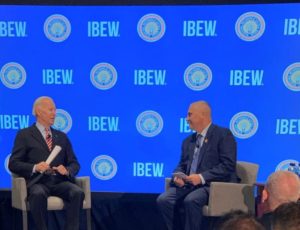 “Our briefings included a wide variety of topics to discuss on behalf of the working families of the IBEW to ensure that their lives are improving and that we are powering a strong economy that works for everyone,” Echeverria reported. “Alvin and I had the pleasure of having a discussion with Congressman T.J. Cox. I am his constituent for CD 21 and upon entering his office, he had ‘Welcome IBEW’ signage and a bowl of Sun-maid raisins, to represent the people of the Central Valley, which I thought was a very nice touch. Our meeting with the Congressman included [discussion of] the PRO Act, of which he is a co-sponsor, as well as support of Davis Bacon language, and the repeal of the Cadillac Tax.” 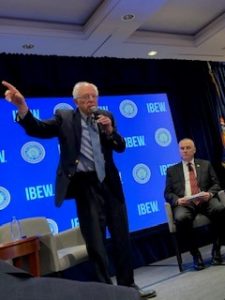 “It is really important to discuss these policies and educate those that have the ability and power to move a bill into a reality, because not only does this set the tone for our upcoming generations of union electrical workers, but it also sets a standard for the working class in the United States,” added Dayoan. 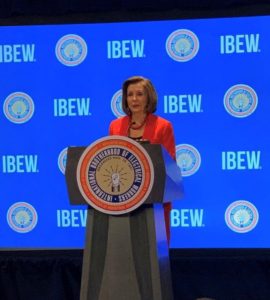 “I paused to take a moment to internalize that I was at the single most important place in the country lobbying for our members at the Capitol,” said Echeverria. “This is the place where the country’s lawmakers discuss, make and approve legislation. This magnificent building is the icon of the American people and government, and I am so incredibly proud and honored to have been given the opportunity to represent our Local.”

“I am very thankful for IBEW 1245 for acknowledging me with this opportunity of a lifetime,” echoed Dayoan. “I am forever grateful and will remember this moment for the rest of my life.”